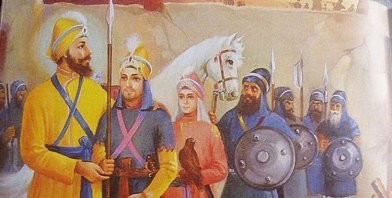 The following is a discussion related to the article “Miter Pyare Nu” in Asia Samachar dated 6-Oct-2016.

The article refers to the khayal by Guru Gobind Singh.  This khayal with English translation (Sant Singh Khalsa) is reproduced below.

The following points are noted in relation to the article in Asia Samachar.

We will address the above in the ensuring analysis.  Analysis has also been conducted by the Sri Guru Granth Sahib Academy titled “ਖਿਆਲ ਪਾਤਸਾਹੀ ੧੦॥ ਮਿਤ੍ਰ ਪਿਆਰੇ ਨੂੰ ਹਾਲੁ ਮੁਰੀਦਾਂ ਦਾ ਕਹਣਾ॥ A Response to the Perfect Example of an Adulterated Interpretation” which is available at Facebook link

which adds to the discussions herewith.  The article by the Sri Guru Granth Sahib Academy points out that the article of Miter Pyare Nu in Asia Samachar (dated 6-10-2016) has been PLAGIARISED besides being RIDDLED WITH LIES to MISLEAD the SANGAT.

Distortion and misinterpretation of the composition

We will first analyse the meaning of the composition.

In this Khayal (ਖਿਆਲ a style of singing poetry: source Mahan Kosh) Guru Gobind Singh is using metaphors to convey the plight of disciples (ਮੁਰੀਦਾਂ) who yearn for God (ਮਿਤ੍ਰ ਪਿਆਰੇ) in relation to worldly pleasures.  Without God realisation, the worldly pleasures are worthless and give pain.   The metaphorical examples used in the Khayal are, using the quilt (ਰਜਾਈ) is like a disease (ਰੋਗੁ), living in a mansion (ਨਿਵਾਸ) is like being around serpents (ਨਾਗ), the flask (ਸੁਰਾਹੀ) is like a spike (ਸੂਲ) and the cups (ਪਿਆਲਾ) like a dagger (ਖੰਜਰੁ).  Separation from God is like enduring (ਸਹਿਣਾ) the chopper (ਬਿੰਗ) of the butchers (ਕਸਾਈਆਂ).  The disciple prefers God realisation (ਯਾਰੜੇ ਦਾ ਸਾਨੂੰ ਸੱਥਰੁ ਚੰਗਾ) than the worldly pleasures which is like being in a furnace (ਭੱਠ ਖੇੜਿਆਂ ਦਾ ਰਹਿਣਾ).

Note: Plight is “a pledge of fidelity” e.g of love. Mahan Kosh gives one of the meanings of ਹਾਲ as ਪ੍ਰੇਮ, ਪਿਆਰ.  The ensuing word “yearn” in the sentence implies this.  This meaning is also used in SGGS page 23 Line 13 ….ਨਿਤ ਰਵੈ ਸੋਹਾਗਣੀ ਦੇਖ ਹਮਾਰਾ ਹਾਲੁ (He continually ravishes and enjoys the happy soul-brides; just look at the plight I am in without Him).  This word has a positive or “Chardikala” connotation.

SUMMARY: In this Khayal Guru Gobind Singh Ji says that without God realisation worldly things, activities we get involved (MAYA) in are going to give us pain.

From the scientific perspective, the problem is we let our MAN (ਮਨ) to be controlled by the five evils (in the process getting pleasure through MAYA).  This usually leads us to external physical situations which inevitably affect our mind and thoughts (internal) and creates stress.  Stress as you know is the causative agent for almost all the illness/problems one can be subject to and results in pain.  By remembering God we can control the five evils and gain the five virtues.  This state does not create stress and hence we are not subject to illness/problems.  Therefore illness/problems will have minimal effect on us due to our state of mind which has attained the five treasures.

History related to this khayal can be read at LINK

The article at the above link clearly points out the conditions under which this Punjabi Khalyal was composed by Guru Gobind Singh.

We can thus conclude that the interpretation in the Asia Samachar article is highly distorted and misinterpreted.

On this matter let us see what notable scholars have to say about the authorship of the compositions of the Dasam Granth.

DR TRILOCHAN SINGH (“The History and Compilation of the Dasam Granth Sikh Review, 1955”)

“It becomes impossible for some devout Sikhs to understand that the Guru who was the creator of the Khalsa and who in many fundamental ways parted radically from Hinduism could write such secular writings as life stories of the avtars of Brahma, Vishnu and Siva such as his Triya Charitar and Chandi Charitar. …  he condemned the worship of these heroes and sages of our country as deities and godheads.  There is another class of writers who do not understand Guru Gobind Singh’s use of the sword of dharma and the great social and spiritual significance he attached to it.”

In his article Dr Trilocan Singh shows that the Dasam Granth is BY NONE OTHER THAN GURU GOBIND SINGH HIMSELF.

Though Bhai Kahn Singh personal opinion, in the Gurmat Martand, was that the Dasam Granth should have been retained as separate binds, BUT he NEVER denied the Guru Gobind Singh’s AUTHORSHIP OF THE DG.

We suggest that one should spend some time going through the documents at https://profanuraagsingh.wordpress.com/category/shri-dasam-granth-sahib/

Therein it is clearly stated, besides many other important points,

It is the document which talks about One Divine Spirit in all the ten Gurus, earlier defined by Bhai Gurdas, Bhatts in their verses in Guru Granth Sahib, Bhai Nand Lal in Ganjnamah, Kavi Sainapati in Gursobha, Parchian Sewa Das, and of course by Guru Gobind Singh ji in Bachitra Natak and Var Sri Bhagauti Ji ki, which forms the Invocation of our Congregational Prayer: ARDASA.

Further we suggest that you also go on to read and understand the compositions in DG also at the same link.  we quote a portion

Baba Binod Singh from the family of Guru Angad Dev Ji also prepared one codex of Dasam Granth during the times of Banda Bahadur with the title Dasven Patshahi ka Granth, which means Dasam Granth. One more codex known as Sangrur Recension is presently with Punjabi University.   ……    In spite of such overwhelming evidence if someone wants to close his eyes to mislead certain innocent people with his perjurious averments then I can only say, ”You can take a horse to a well, but you cannot make him drink the water”.

All the writings/documents by Professor Anurag Singh substantiate/proof that the AUTHOR OF DASAM GRANTH IS GURU GOBIND SINGH.

Listening to his lectures on Dasam Granth e.g.

shows that GURU GOBIND SINGH IS THE AUTHOR OF DASAM GRANTH.

A site with more information on Dasam Granth’s authorship is

Based on CREDIBLE REFERENCES, without any doubt it is confirmed that THE AUTHOR OF THE DASAM GRANTH IS GURU GOBIND SINGH.  It is highlighted that these credible references have spent a lifetime studying the teachings of our Gurus.

The authorship of Dasam Granth has been shown to be attributed to Guru Gobind Singh in above.

However we will in this part address the fallacy about the “phantom” poets Ram Sham and Nul.

The article claims that Raam, Syam and wrote the major part of the DG without citing any supporting credible evidence.  On this basis it concludes that they are the writers of the vast majority of Dasam Granth.

Dr Trilochan Singh, who is an authoritative exponent of Sikh history, theology, philosophy and culture, in “The History and Compilation of the Dasam Granth Sikh Review, 1955”, analyses the authenticity of the Dasam Granth POINTING OUT THE SHALLOW INTELLECT OF THOSE WHO DENIGRATE IT and states that “the genius of one mind, the art style of one poet is visible in the whole of Dasam Granth”.

Dr Trilocan Singh shows that Ram and Syam were poetic translation of Guru Gobind’s name.  He shows that in Sikh theology the three words Govind, Ram and Syam mean the same thing.  Dr Trilocan gives a detailed analysis of this in his paper.

As for the word nul ਨਲ, it is found in the Dasam Granth as follows.

Chandi Charitar 1 Stanza 151; Nul refers to one of the two monkeys “Nal” and “Neel”.

Rudra Avatar Stanza 492; Nul refers to one of the two monkeys “Nal” and “Neel”.

BY ANY STRETCH OF OUR IMAGINATION WE WOULD NOT EXPECT THESE CHARACTERS OF THE MAHABHARATA COMPOSED IN 200BC ON EVENTS THAT OCCURRED IN 3200 BC TO BE WRITING THE DASAM GRANTH!

The IMAGINATION of the author has really RUN WILD in the article.

Originality of the article

The article, which is a critical analysis, comes across as an original writing since no reference sources are stated.  In this critical analysis (?) the author has linked the Khayal to poets Waris Shah and Damodar.

The analysis by Sri Guru Granth Sahib Academy pointed out that the author of Miter Pyare Nu in Asia Samachar (dated 6-10-2016) had PLAGIARISED THIS LIE from facebook account Harpreet Singh 11-May-2014 who linked this Khayal to Waris Shah. This article is also found at QUORA in July 2015. LINK:

(Please read the comments which SHOW THE LIE in that article). The article in QUORA (and before that FB in 2014) FALSELY LINKED Guru Gobind Singh’s shabad Miter Pyare Nu in Dasam Granth to the composer of Heer Ranjha.

Additionally, sections of the article have been taken from “The Real Story of Heer Ranjha” at LINK

Wikipaedia defines plagarism as “Plagiarism is the “wrongful appropriation” and “stealing and publication” of another author’s “language, thoughts, ideas, or expressions” and the representation of them as one’s own original work”. This is in LAYMAN’S term STEALING ideas (in this case linking Guru Gobind Singh’s Miter Pyare Nu to the composer of Heer Ranjha) from somebody’s work without stating the source.

Plagiarism is such a serious matter that the Vice Chancellor of Monash University resigned in 2012 because he had plagiarised text for his book written 20 years prior.  It is surprising, bearing in mind the academic ethics (IT IS CONSIDERED A CARDINAL SIN OF ACADEMIA), the author of Miter Pyare Nu in AS did not quote the source of linking Miter Pyare Nu to the composer of Heer Ranjha. It appears VERY UNETHICAL of the author.

Another matter to consider is the linking of Poet Damodar to this Khayal.

This linking appears to have come about through the “Dawn” a Pakistani online newspaper.  Two articles (part 1 dated 7-Jun-2013 and part 2 dated 14-Jun-203) appeared in this newspaper.  See LINKS

as well as the link mentioned in section “Linking to Waris Shah” above.

This newspaper stated “Poets like Muqbal, Waris Shah and Charag Awan to name just a few built their versions based on Damodar’s narrative, albeit with some changes here and there to suit their creative needs in different historical conditions”.

The author shrewdly used these articles to link Waris Shah to Damodar but did not acknowledge the source.

….. Damodar except that he, the greatest classical story teller of Punjab, was the first to compose the legend of Heer Ranjha…..

…Damodar is my name, Gulati is my caste. I came to the fiefdom of the Sial my heart using its discretion led me to spend my days there,” is what he says in the opening lines of his story.

The motive behind this linking appears to be to present a time span from 1500s (Damodar time) to 1700s (Waris Shah’s time).  This is an attempt to avert questions relating to timing of the composition.

Summing up, the article is a false article which borders on imaginative fictional story telling.  It should be taken as nothing more than A FICTIONAL IMAGINATIVE STORY with hardly any moral value.  Further the article appears to be quoting from the article by the Sri Guru Granth Sahib Academy a “STRAIGHT UP LIE TO MISLEAD THE SANGAT”.