For context, the preceding verses describe how during the ‘Bhangani Battle’ Hari Chand shoots three arrows at the Guru. The first is aimed at the Guru’s horse. The second narrowly misses the Guru’s ear, and the third hits the Guru’s belt but causes no injury.

Karang lai kamaanang|| Hanang baan taanang||31||
I took the bow in my hand and aimed and shot the arrow.31

Sabai beer dhaae|| Saroghang chalaae||
All the warriors fled, when a volley of arrow was showered.

Ranang tiaag(i) bhaage|| Sabai traas paage||
The hill-men fled from the battlefield, all were filled with fear.

Dhanang dhaar barkhe|| Sabai soor harkhe||35||
I showered wealth on the warriors, who were full of rejoicings.35.

Evidence as in Bachittar Natak 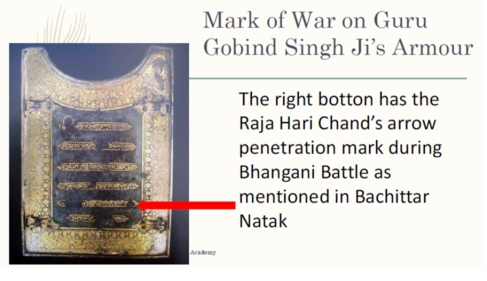