The Indian Diaspora community in Nova Scotia invited me to a picnic during a visit there one summer. After a tasty meal, a group of people sat down and engaged in a conversation about the Guru Granth Sahib. It was a healthy dialogue, and all were pleased to learn something new.

Towards the end, a woman dressed in Western clothing requested the opportunity to ask me a personal question. “Being a Hindu, how did you get so deeply interested in the Guru Granth?” She asked, with thought-provoking intentions.

I knew the answer, but I intended to provoke further dialogue. I countered, “for the same reason that I find you, as a Christian, being so interested in Sikhi.” “No my friend, I am Sikh and not a Christian, and my parents were faithful Sikhs in Punjab. “They raised me in the Sikh tradition which I continue”, she responded with pride and confidence. But she was a bit startled and asked, “Why did you think I was Christian?”.

I offered my apology for being mistaken in stereotyping her. I told her I was wrong about her religious identity because of my upbringing. In the community where I grew up, a woman with a Western hairstyle and wearing Western clothes would always be taken as a Christian as only they looked like this. I told her I readily accepted her as a Sikh. I continued to tell the friends gathered around that I was Sikh also, even though I may look like a Hindu to some.

I was born in the House of Guru Nanak, and my parents took me to Gurdwara Sri Panja Sahib in Pakistan for the naming ceremony. The Guru and the congregation gave me my name, Harbans Lal. The surrounding community gave me my dress, which changes from time to time depending on the culture I live in.

The disconnect between faith and external perceptions is not my view, l learned it from my Guru. The lesson is that we should see others independent of stereotypes. Before I cite the Guru Granth, let me cite an example from Hindu scripture, Ashtavaker Geeta. I will abbreviate the story for lack of space here. Giani Harinder Singh narrates this story in detail often in his exegesis to illustrate the topic under discussion. 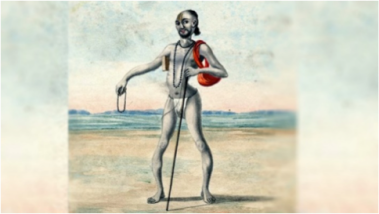 The celebrated King Janak held a debate of Hindu scholars on a religious subject and offered cows decorated with gold plated horns as a reward to the winner. A 12-year-old boy, Ashtavaker, who had developed a reputation for a high scholarship at a young age was invited. On the day of the debate, because of the long distance travel, the boy was late entering the court when the contest was already reaching its climax.

The pundits saw the deformed body of Ashtavakra moving in a funny way and began laughing. In fact, the whole meeting broke into laughter, and then Ashtavakra also began to roar with laughter.

King Janak asked the boy “Everyone else is laughing. I can understand why they laugh, but why did you laugh, my son?”

Ashtavakra responded – I expected to speak to an assembly of extraordinary scholars. Instead, I found a gathering of charmers and cobblers (people who worked with animal products including skinners, butchers, skin and bones traders, shoemakers, etc.). Therefore, I could not control myself from bursting into laughter. What are all these cobblers doing here?”

A profound silence fell over the meeting. Butchers? Skinners? The king asked, “What do you mean?”

Ashtavakra said, “They assessed me by only seeing my skin, my body and clothing. They failed to see the real me. Your Majesty, in the curve of a temple, is the sky curved. When someone smashes the pot, does the sky shatter? The sky is beyond the shells, which enclose it. They did not wait until I presented who I really was and just began laughing. My body is twisted, but I am not. Look inside me. You will not find anything more straight and pure.”

It was a very startling declaration, and there was complete silence. Janak was impressed and astounded: “You are absolutely right, why did I gather a crowd of animal skinners?” He became repentant and felt guilty that he too had laughed.

That day the king could not manage to say anything more, but the following day he went to Ashtavakra, dismounted from his horse and fell at his feet.

The day before he had asked, “Why do you laugh, my son?”. Ashtavakra was a twelve year old boy, and Janak had considered his age. On this day he did not notice his age. He fell at Ashtavakras’ feet, spread-eagled in prostration, and Janak eventually adopted Ashtavakra as his Guru.

The  Guru Granth has many verses warning us against profiling people based on their looks or external garb. For now, I will cite only one of those verses.

ਜਿਨ੍‍ ਪਟੁ ਅੰਦਰਿ ਬਾਹਰਿ ਗੁਦੜੁ ਤੇ ਭਲੇ ਸੰਸਾਰਿ] SGGS, p.473
In this world, the meritorious are those who are silky inside (virtuous, caring, spiritual), though they may look like rags (downtrodden, noncompliant) on the outside.

In conclusion, I wish to say that you should be mindful and not stereotype someone when you see their appearance, religious or otherwise. They may be very different from what you expect. Before you complain, speak your mind, or send a belligerent email, pause. Ask yourself if you really know where the person is coming from. Try to rephrase critical thoughts into positive ones, or at least neutral ones. Don’t let your mind scan for negatives. Instead, look for the goodness inside.

Our sincere thanks to Dr Harbans Lal for permission to publish the article.