By chance we happened to view the Facebook page of Singh Sabha International Canada  and hey presto a familiar face (see below standing extreme left) popped up.

The Gurmukhi text above the picture reads:

The person in the centre, Inder Singh Ji Ghagga, gave and uneasy feeling from Gurmat perspective.  Wondered if Malaysia is so dire for Sikhi of the ideology preached by Ghagga Ji and his associates.

“Singh Sabha Canada is Anti Sikh Organisation who do not believe in religion and very shallow in academics.  Jeonwala has been a communist all his life and is still a non-believer.  Recently he grew hair to mislead Sikhs on Dasam Granth and other writings.  This thug group was started by Kala Afghana and Spokesman.  Spokesman now is openly disowning all our Gurus except Guru Nanak.  He says that SGGS is not compiled by Guru Arjan Dev Ji.  This is open now.”

Now to the head of the Parchar, Professor Inder Singh Ghagga Ji from  Panthic.org (Link B).  Some key points for the Sangat. 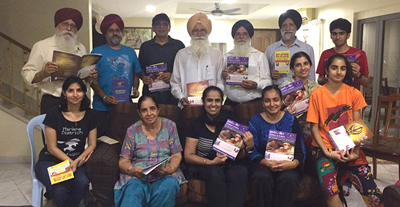