In winter of 1992, I was visiting village of my in-laws known as village Ghagga in Patiala Distt. This village is mostly inhabited by Pannus who migrated from Amritsar Distt long time ago. Inder Singh Ghagga was known as Bhai Inder Singh Pannu in those days. One mornimg, I went to the Gurdwara Sahib to listen to (Aapnay Gharaan ‘chon) does katha in the Gurdwara Sahib daily. As I walked in, I noticed about 3-4 bodies (mostly puranay sareer) sitting as listeners (Sarotaas) with Loiies around their bodies. I sat till the end of Katha, and Bhai Inder Singh spoke to me for about 15 minutes afterwards. In this conversation, he basically expressed a very keen desire to visit Canada, and wanted me to send him a sponsorship through our Gurdwara Sahib. I was not impressed with his Katha at all because I noticed he knew only surfacial meanings, and had no depth in his elaborations of the Hukamnama that day. In fact I found it very empty and meanings stretched with no linkages in his conclusions. I walked back home and asked my brother-in-law about Bhai Inder Singh’ background and as to how he became a Kathakar out of these illiterate Pannus of Ghagga.

My brother-in-law told me that Harpal and Inder’s family did not have much land and were very poor. Their father worked hard to send his children to school. Inder Singh, the older son was studying in matric and got a job as a driver with Electricity Board, Bathinda office. The younger Harpal was smarter and went to Punjabi Uni to do his P.hd. This way I came to know that Inder Singh Panuu and Harpal Singh Pannu of Pbi Uni were real brothers.

Inder Singh, however was charged & convicted with theft/stealing from Electricity Board Bathinda and was dismissed from his Driver’s job. He returned back to Ghagga.  After that Inder Singh took correspondence courses with Missionary College Ludhiana, and upon completion of his diploma, started doing Katha and make his both ends meet. The local Gurdwara offered him a fixed salary to extend help to Inder Singh’s family. This much I came to know at that time. The matter rested at that. Many years passed by, till Kala Afghana controversy started circulating.

As destiny has it, I met Kala Afghana here in London as well few years before his black-writings were published. Kala Afghana was staying with his daughter, who’s husband was a physician in local hospital. Interestingly enough KA gave me the first draft of his book Bipran Ki Reet printed on dot-matrix printer (I still have that) to look it over, and offer my opinion. I found his writing so boring that I never bothered about it, and dismissed it as crazy cravings of an old frustrated man who was angry at Sikhs that his relative who was a Kirtania got killed by Khardkoos.

KA went away to California and things were quiet for some years. Suddenly, his books started appearing and controversies were seen in the papers. I found out about KA’s conviction in molestation case of Victoria Gurdwara and published the judgement on the Gurmat Learning Zone for the first time. This bombshell came as a surprise to KA followers. At first they did not believe it and doubted its authenticity. When confirmed, they started putting up another argument that what matters is not his chracter but what he says about Gurmat, and the service he has rendered in exposing Bipar influence upon Sikh way of life. I have not yet published KA’s shameful act in the Gurdwara in Saskatoon, and he received a severely worded warning from Sangat to not repeat such things. His followers can ask him directly about this, if they think he will tell the truth. Anyways, let us continue…

The dead stories became alive again recently as I heard one Prof. Inder Singh Ghagga appearing as member of Sri-Dasam-Granth-Hate-Brigade, and Hindu-Hate-Brigade (like admirers of KA such as Joginder Singh Gurtej Singh). I never knew who is this Prof. Ghagga, but the word “Ghagga”, being village of my in-laws, made me curious to find out who was this guy. When I checked further, I found out that this man was the Inder Singh Pannu, I met long time ago in Ghagga Gurdwara – Dr. Harpal Singh Pannu being his younger brother. The story became more dramatic as I learned this:

I spoke to Dr. Anokh Singh ji of Bathinda, and asked him if he knows Prof. Ghagga. He confirmed further that he is brother of Prof Harpal Singh Pannu. I said but Pannu’s views about Sri Dasam Granth are diametrically opposite to that of Inder Singh. How is it possible to have this relationship? Dr Anokh Singh added that he met Dr. Harpal Singh at some Sikh gathering and asked similar question as I had. He asked him if he was Inder’s real brother, by the same parents. Harpal Singh confirmed but with a few very interesting qualifying remarks. Dr Harpal Singh Pannu said:

2. I (Dr Harpal Singh Pannu) had a small modest dwelling in Patiala that I built after a long time working as a professor at the Uni. Whereas, my brother Inder, who is Matric educated, owns a kothi in Ludhiana.

This is how Dr Harpal Singh Pannu responded to Dr. Anokh Singh’s shocking questions. By the way, this Dr Anokh Singh was present in Toronto area location where about 150 Singhs had assembled to have a debate with Prof Ghagga on points of contention. Prof. Ghagga never appeared there as already reported in the press.

I asked Dr Anokh Singh about the title Prof. that Inder Singh Ghagga uses. He explained that a Gurmat College was started across from canal in village Jawaddi by some Gurmukh piara by donating his ancestral land. That man has died. Inder Singh got job to teach Gurmat there after receiving his diploma from Ludhiana Sikh Missionary College’s correspondence course. This is how he found a short cut to Professorship as opposed to his brother Dr Harpal Singh Pannu.

For reader’s knowledge I would suggest two books: One is titled Kalaey Afganay Dey Kalay Leikh. This book is a very good collection of articles dealing with Kala Afghana’s anti-Sikh writings. Dr Anokh Singh has written excellent articles in this. (Dr Anokh Singh has written one small book on Gurbani Grammer as well, worth acquiring as well.) Second book that deals very thoroughly the KA issue and deals with the filth of KA systematically, is “Sabh Dushat Jhakh Maraa” by Kanwar Ajit Singh of Patiala. This is a must read for all the KA supporters, and those who seek truth of Gurmat, Guru-Gyan-Bhauray. 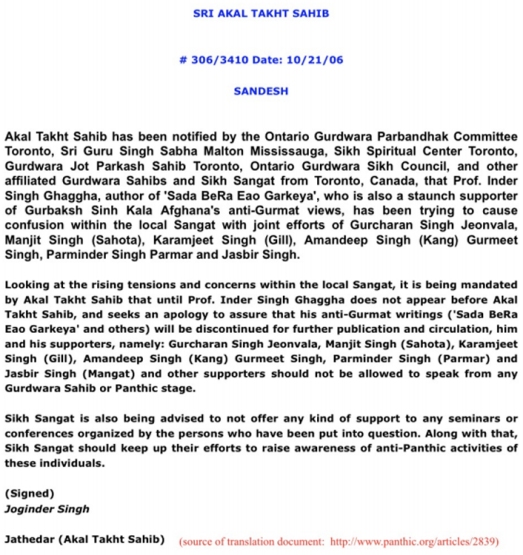 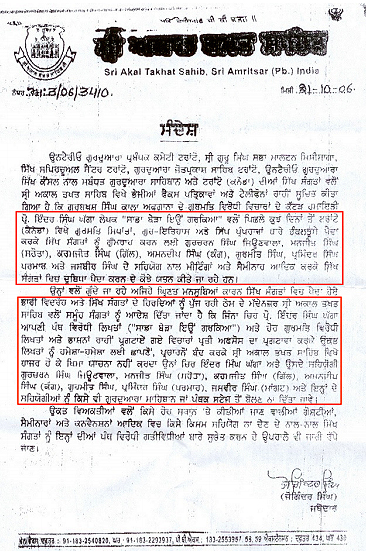 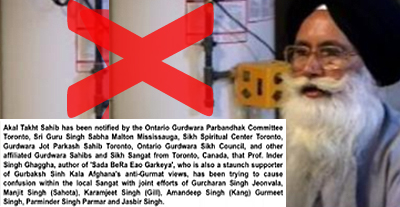