Many people use the 12 o’clock joke to make fun of the Sikhs without quite knowing what it’s about. In turn, the Sikh victims get infuriated without quite knowing why. The origins of the joke, now lost in the mists of time, were in dead earnest. If the Sikhs knew the real story, they would be proud to be alluded to as the `12 o’clock people’, and the people would regard them with respect.

To understand the joke, we have to go back to the time of Guru Gobind Singh Ji, the tenth Guru of Sikhs. During 17th Century, when India was ruled by Mughals (Muslim Extremists), Hindus were humiliated and deprived of any right to conduct their religious practices. Mughals treated the Hindu women as there own property and were forcing all Hindus to accept Islam and even used to kill the people if they refused to accept.

During that time, our ninth Guru, Guru Tegh Bahadur Ji came forward, in response to a by request some Kashmir Pandits (Hindu Priests) to fight against all these cruel activities. Guru Ji told the Mughal emperor that if he could succeed in converting him to Islam, all the Hindus would accept the same. But, if he failed to do so, he should stop all of his oppression. The Mughal emperor happily agreed to the challenge and invited Guru Ji to Delhi. Guru Tegh Bahadur Ji was tortured for five days, he was made to sit on hot iron plates, and thrown into a cauldron of boiling water.

Right in front of Guru Ji, his companion Bhai Mati Dass was sawed in two and  Bhai Sati Dass was wrapped in cotton, and hot oil was poured on his body and set on fire. Guru Ji was boiled in hot water and subjected to many more tortures in the hope that he would cave in and accept Islam. Guru Ji however did not even scream once, he was a true devotee of God and had been meditation on God for decades. After extreme tortures when Aurengzeb failed to convert Guru Tegh Bahadur Ji to Islam, he beheaded the Guru in Chandni Chowk, Delhi.

Thus Guru Ji sacrificed his life for the protection of Hindu religion. Can anybody lay down his life and that too for the protection of another religion? This is the reason he is still remembered as “Hind Ki Chaddar”, Shield of India. For the sake of whom he had sacrificed his life, none of the them came forward to lift his body, fearing that they would also be assassinated.

Seeing this incident the tenth Guru of Sikhs, Guru Gobind Singh Ji made a resolution that he would convert his followers to such human beings who would not be able the devotees of God but in order to protect their religion and the right of worship for others they would be warriors as well.

In 1739 Nadir Shah, King of Persia, crossed the frontier and swept down towards New Delhi, India. He was the first invader who was here only to plunder and kill, with no intention of staying. His troops reached Delhi, where they killed 150,000 people, both Hindus and Sikhs. He looted India and was carrying lot of Indian treasures and nearly 2200 Hindu women along with him. The news spread like fire and was heard by Sardar Jassa Singh who was the Commander of the Sikh army at that time. Sikhs were very few in numbers while the army of Mughals was in hundreds of thousands. Sardar Jassa Singh decided to attack Nadir Shah’s army at midnight.

He did so and rescued all the Hindu women and they were safely sent back to their homes. It didn’t happen only once but thereafter whenever any army from Afghanistan or Iran attacked and looted an Indian city and were trying to carry the treasures and women in order to sell them in Arab markets, the Sikh army although fewer in numbers but brave hearted attacked them at midnight, 12 O’clock, and rescued the women along with the treasure.

Whenever there was a similar incident, people started to contact the Sikh army for their help and Sikhs used to attack the raiders at midnight, 12 O’clock. Sikhs did so because they were fewer in number and could use the darkness to their advantage. It continued and became a known fact that at midnight, nearly at 12 O’clock, it is very difficult to fight against Sikhs as the Sikhs mastered the art of fighting at night.

Thus the 12 o’clock joke was born. Initially, instead of being grateful for their heroism, some people would say that the Sikhs are in their senses only at night. It was apparently futile to expect help from them at other times.

The Sikhs were naturally annoyed. They were trying to help the Hindus and were getting only ridiculed in return. When some people crack this joke, they are oblivious to the fact that if Sikhs had not intervened, Indian people would have to keep facing the oppression by Muslim extremists and Indian women would have been dishonored and taken into exile. The Sikhs should be proud of the 12 o’clock incident, because of them, the dignity of India was restored after Nadir Shah’s invasion; one of the most terrible act of war ever to be perpetrated in India. 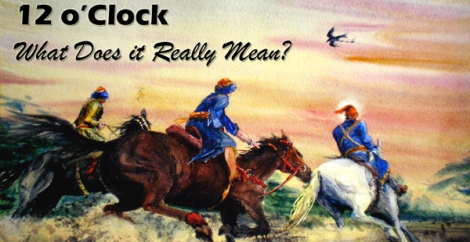