Here is an official mail by brother of Comrade Purewal, revealing the initial gifts received by the spokespersons of SGPC to promote and implement so-called Nanakshahi Calendar-Samvat, which was neither a Calendar nor Samvat since it was a carbon copy of Indian National Saka Calendar, it cannot be called a Sikh Calendar in any manner. Its initial name was Sikh Calendar.

Secondly, it is not even a Samvat, as First a Calendar is prepared or chosen and then an event is selected to start a Samvat. The so-called Nanakshahi Calendar, prepared in 2003 starts from 1 Chet, which is not a Agman Purab of Guru Nanak Dev Ji.

Thirdly, Guru Nanak Dev Ji was born in the year 1469CE and not 2003 when this duplicate Calendar was introduced.

Now all the protagonists of this Duplicate Calendar are raising their shrill voices to revive this dead horse. Even Indian Government banned the original Indian National Saka Calendar in 2015. Imagine the mental sensibility of people like

For them Sikh Calendar (modified Bikrami) introduced, used and popularised by the Sikh Gurus in

failed to give SEPARATE IDENTITY to the Sikhs, but a Comrade and Clean Shaved Purewal assumed his Sikh form in 1995-96 and presented Indian National Saka Calendar as Nanakshahi Calendar with the active support of then Chief Minister of Punjab, Mr Beant Singh, is the original Nanakshahi Calendar.

Those who do not know when Guru Nanak Dev Ji was born (1469 or 2003CE) are posing themselves as Neo Reformists, but actually working in tandem with the anti-Sikh forces to push up their politics of assimilation.

Confront these Slanderers of the Guru. 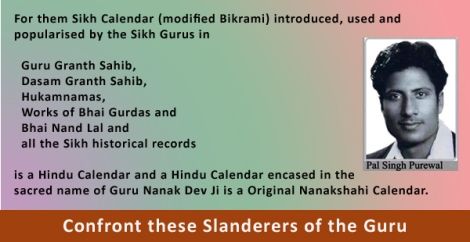