Most of us are aware of the criticism circulating against Sri Dasam Granth.

First of all, let us pray for those souls who are in the “Lost World”.

Later in the 10th form (Guru Gobind Singh Ji) bestowed the Gurgaddi to Adi Granth and gave Adi Granth the status of “Living Guru”.  For example, Guru Ram Das Ji was known as Bhai Jaita before Gurgaddi was bestowed to him by Guru Amar Das Ji.

However, there are many other Dharmik Granths. Granth means compilations. But this Granths are not bestowed with Gurgaddi.

Only Guru Granth Sahib Ji has been bestowed with Gurgaddi and the other Granths are such as Dasam Granth, Sarbloh Granth and Suraj Parkash Granth. This Granths are not bestowed with Gurgaddi however they are Sadkaryug as Vaaran Bhai Gurdas, Bhai Nand Lal Gazals and Rehitnamays. Dasam Granth is referred as Bani (Words of Guru Sahib) as it is the writings of Guru Gobind Singh Ji as per Rehitnamays. Three Nitnem Banis are from Dasam Granth, Ardaas is from Dasam Granth, Three Amrit Sanchar Banis are from Dasam Granth. The Shabad which we often sing on Vaisakhi at Khalsa Sajna Diwas, “Khalsa Mero Roop Hai Khaas“, is from Sarbloh Granth and can be said Gurbani (words of Guru Sahib) as it was uttered by Guru Gobind Singh.

Most of the Kathas done in Gurdwaras by great Vidhvans (Scholars) are taken from Suraj Parkash Granth. Panth have recognised Rehitnamays without any doubts. One line in one of the Rehitnamay, “Dou Granth Mein Bani Joe Chun Chun Kanth Karay Nit Soey“.

Now SangatJi tell me whom to believe, the puratan Rehitnamays or the current so called educated souls?  Obviously the Rehitnamays, as Akal Takth have ordered us to accept the Rehitnamay.

Lastly, I repeat Sri Guru Granth Sahib Ji is our Only Living Guru and other Granths are Sadkaryug.

The video above is a clip of Panth Deh General, Sant Giani Jarnail Singh Ji Khalsa Bhindranwale Mahapursh talking on Dasam Granth being the writings of Guru Gobind Singh Ji. 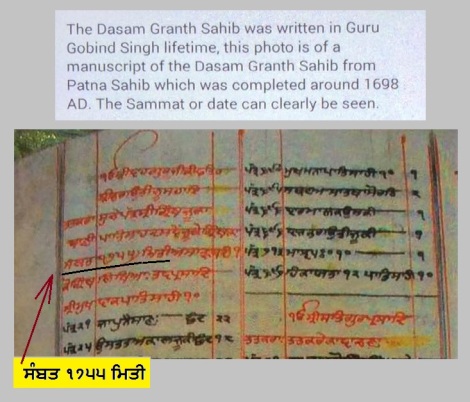