In part 1 we analysed some of those groups/individuals who are jubilant with the success of the MGC resolution approved by the Sangat.

What has the SANGAT APPROVED

In this part, Part 2, we will analyse the resolution that the Sangat has approved and the implications of this resolution on the Sangat and connected parties.

We will first look at the key points in the Resolution.  We will then perform an analysis.  Figure 1 shows the relevant extract from the Resolution in Appendix A attached with the MGC EGM letter.

Figure 1: Extracts from the Resolution (Full page resolution included at the end in Figure 4) 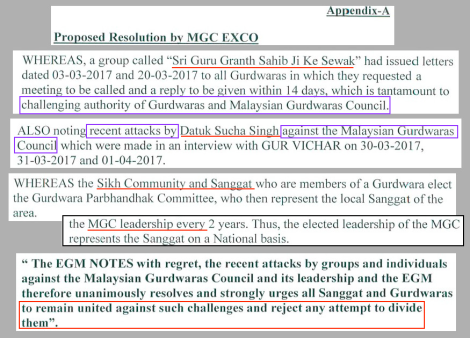 Who are the parties involved?  They are (see red underline in Figure 1)

What caused MGC to prepare the PROPOSED RESOLUTION?  These are shown in magenta boxes in Figure 1 and listed below.

What does the MGC want to achieve with the Resolution?  This, shown in the red box in Figure 1 is listed below.

The most important aspect to understand is THE CHALLENGES AND ATTACKS which the MGC interprets as AN ATTEMPT TO DIVIDE THE SANGAT.  We will analyse this first and look at allegations

The allegation is that SGGS Ji Ke Sewaks are challenging the authority of MGC.

How does one challenge another’s authority?  This is done by questioning and or rejecting the truth or validity of an edict or tenet issued by the authority.

The Sewaks did not question or reject the “Ek Granth Ek Panth Ek Maryada” slogan.  Requesting a dialog session is not questioning or rejecting the validity of the slogan.

How is MGC able to interpret this as an attempt to DIVIDE THE SANGAT is anybody’s GUESS.

It appears that MGC is not prepared to explain/discuss the Ek Granth Ek Panth Ek Maryada concept with anyone including the Sangat.  THIS DOES NOT GIVE THE CONFIDENCE THAT THEY TRULY UNDERSTAND THE CONCEPT, ITS IMPLICATIONS AND ITS IMPACT.  It appears more like they are DIRECTED to promote this concept.

ADDITIONALLY,  if a request for dialog is considered a “challenge” then there can NEVER BE A CHECK AND BALANCE; MGC being free to act as it wishes.  Is MGC a DICTATORIAL body?

The allegation is that Datuk Sucha Singh is attacking the MGC in reference to the 3 part interview posted on Gurvichar.  They have not detailed what the attack is?

What is an attack?  An attack is as per Meriam-Webster Unabridged Dictionary is

Let us now see what “attacks” has Datuk Sucha performed on MGC.  To find the answer we have to refer to the interviews.  The main points in these interviews are summarised below.

The authority of the Takhats

Part 2 and 3: This part essentially examines the stand taken by MGC about the ban on Katha and Kirtan of Dasam Granth Bani and matter related to the Takhats, SGPC, SRM, MGC constitution and the Global Sikh Council Inc.

The authority of the Takhats

Attacks on Niketan and SGGS Academy

MGC and its EXCO Committee

Advise to the Gurdwaras, Sangat and MGC leadership

It is obvious from the above summary that MGC believes the “concept of LIVING Guru” is a “METAPHOR”.

Datuk Sucha points out that the prohibition and ban of Dasam Granth Bani is against the Gurmatta/Matta/Adesh/Sandesh of the Takhats as well as the Sikh Rehat Maryada.

Therefore it is wrong for MGC leadership effect their prohibition and ban of Dasam Granth Bani.

Further he is pointing out that the link between MGC and GSC is not in line the MGC’s constitution.  Further MGC is associating with GSC who have are classed as Panth Dokhi the Takhats.

He also questions if the MGC leadership really follow the SRM and the requirements of the MGC constitution.

Finally, considering the above, he advises the Gurdwaras and Sangat to take the status quo seriously and reclaim the council.

So essentially he has shown the ban is wrong, MGC should abide by its constitution and Gurdwaras and Sangat should take the status quo seriously.

If the above is classed as an ATTACK then where does QUESTIONING and HIGHLIGHTING DISCREPANCIES stand?

How can posing QUESTIONS on and HIGHLIGHTING DISCREPANCIES cause DISUNITY of the Sangat?

SGGS Ji is a metaphor

The Sangat through this resolution has achieved the following.

WHERE IS THE SIKHI IN MALALYSIA LEADING TO?

It is quite clear from the above analysis that the consequences are not very supportive of the Sikhi that has been practiced in Malaysia from the time of our forefathers.

MGC allegation that the actions of SGGSJ Ke Sewaks and Datuk Sucha Singh is and attempt to DIVIDE THE SANGAT is GROSSLY MISINTERPRETED by the MGC.

The Sangat has effectively GIVEN an OPEN CHEQUE to MGC in association with GSC to sign away the Sikhi in Malaysia to the Kala Afghana/ Ragi Darshan Ideology.

Now the actual consequence of this is very worrying.  It is very bleak for Sikhi as has been practiced since our forefathers.

We will have a new religion a modified version of Sikhi, MOD-SIKH if I may call it, which is pinned on LOGIC/REASONING and CRITICAL THINKING devoid of SHARDA (note that intuition is linked to SHARDA).

Our future generation will be like ROBOTS devoid of intuition and innovative ideas.

For the information of the Sangat attached please find the English Version of the Akaal Takhat Maryada prepared under the auspices of the SGPC which is no more available at the SGPC website.  Do not forget to view the attachments where Matta 41edicting 5 morning Banis and other Mattas/Adesh/Sandesh is included. 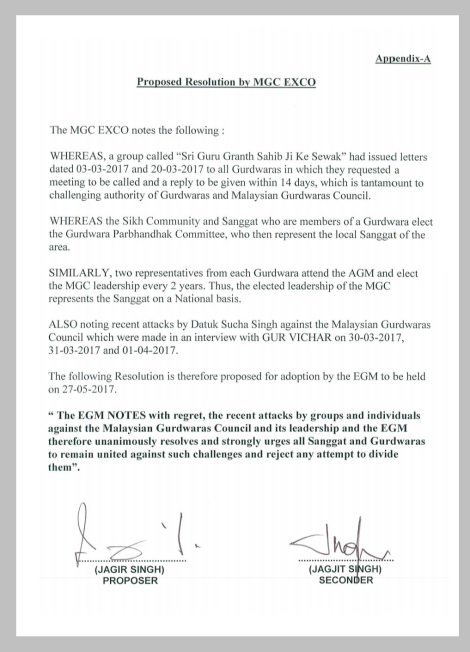 PDF of the SRM 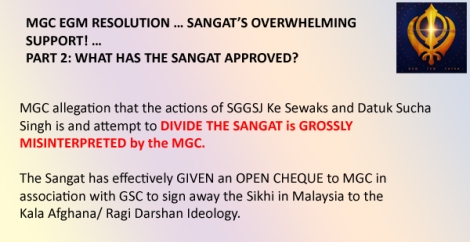