The Jangnama, by Qazi Nur Muhammad, is an eyewitness account in Persian verse of Ahmad Shah Durrani’s (Ahmad shah Abdali) seventh invasion of India, 1764-65, for which it is the only major source of information. A copy of the manuscript written in the hand of Khair Muhammad of Gunjaba was preserved at the District Gazetteer Office at Quetta in Baluchistan from where Karam Singh, state historian of Patiala, made a transcript which was utilized by Dr Ganda Singh in producing an edited version of the Persian text, with a preface and a brief summary in English. The work was published by the Sikh Historical Research Department, Khalsa College, Amritsar, in 1939.

Ahmad Shah had planned his seventh invasion as a jihad or crusade against the Sikhs, who had, since his previous invasion, not only captured Sirhind (January 1764) but had also threatened Lahore and ravaged twice during that year the territories in the Gariga Yamuna Doab of Najib ud Daulah, his ally and agent at Delhi. Ahmad Shah invited Mir Muhammad Nasir Khan, ruler of Kalat in Baluchistan (1750-95), to join him. Qazi Nur Muhammad, son of Qazi Abdullah Kilawar of Gurijaba, accompanied Nasir Khan, who at the head of 12,000 Baluchls, met the Shah at Eminabad, 50 km north of Lahore. The combined force of 30,000, did not meet any opposition before reaching Lahore, towards the end of November 1764.

The Shah was holding a council of war the next morning when a fast riding messenger came to report that the Baluchi vanguard was under surprise attack from a strong Sikh force. Mir Nasir Khan immediately went to the help of his troops. Qazi Nur Muhammad, relating the events of this first encounter with the Sikhs, describes the tactics adopted by the latter thus: “A troop advances and, firing a volley from some distance, retires to reload their muskets while another troop starts firing from another flank. Thus, while they can relax somewhat by turns, they do not allow any respite to their enemy.” The battle raged throughout the day and came to an end only at the fall of darkness. The Sikhs did not resume the attack the following morning. The Shah marched upon Amritsar whither the Sikhs had been reported to have withdrawn. But when he reached there on 30 November 1764, not a single Sikh was to be seen. Next day, a band of 30 Sikhs sallied from a fortified house (bunga, in Punjabi) and attacked the Shah’s camp.

“These dogs [as the author disparagingly called the Sikhs] were only thirty in number. They were not in the least afraid. They had neither the fear of slaughter nor the dread of death. They grappled with the ghadzis or crusaders and, in the engagement, spilt their blood and sacrificed their lives for their Guru” [This small Sikh contingent was led by Gurbakhsh Singh Shahid]. Ahmad Shah returned to Lahore where he held another council of war at which Mir Muhammad Nasir Khan expressed the opinion that they should advance to Sirhind where they should stay awaiting further news from NajTb ud Daulah, who had been besieged in Delhi by Raja Jawahar Singh of Bharatpur and his Sikh allies of the Buddha Dal under Jassa Singh Ahluvalia. Ahmad Shah Durrani resumed his march but, conscious as he was of the might of the roving Sikh bands, he followed a circuitous route through Batala, Hoshiarpur and Ropar and, avoiding Sirhind altogether, proceeded via Pirijore, Naraingarh and Jagadhri reaching Kurijpura, near Karnal, by the middle of February 1765 after meeting with stiff resistance at many places en route. 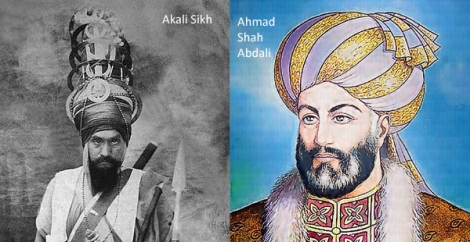