Thank you Premraj Singh Ji for this article.

Sangat Ji, please read this carefully as many, including Major Sikh organisation in Malaysia, are practicing and propagating this ideology/beliefs.  Many of the Kala Afghana aligned beliefs of these people have been pointed out in articles on Gurvichar.

More information about Kala Afghana and others aligned to this ideology can be viewed HERE.

ARE WE PRACTISING WHAT THOSE WHO HAVE BEEN EXPELLED BY AKAL TAKTH PREACHED? If yes, then we are in the same boat as them and the hukamnama by Akal Takth applies for us as well.

This book consist of the ideology (personal opinion) of Gurbaksh Singh Kala Afghana which was not accepted by the Panth as it was CONTRARY to Sikh Rehat Maryada.

The ridiculous ideology of Gurbaksh Singh Kala Afghana was referred to Sri Akal Takhat Sahib (Supreme Throne of Sikhism). The 5 Pyaray after going through the ideology presented in the book by Gurbaksh Singh came to a conclusion in the form of a “Hukamnama” (Order for the whole Panth). (Hukamnama attached at the end of this post)

Below is the ideology espoused by Kala Afghana which was not accepted.  It criticises Sikhism and is contrary to Sikh Rehat Maryada.

Doing bhog of Deg in presence of Guru Granth Sahib is manmat.

States that the Jhal of the Sarovar should NOT be referred to as Amrit.

Criticises the practice of washing our feet before entering Darbar Sahib.

Questions how can you call a particular time of the day Amrit-Vela when so many evil things happen around the world at that time.

Accuses Bhai Veer Singh Ji of lying about Baba Sri Chand Ji, and refers to such writers as “Sikhi Day Vayree” (enemies of the Sikhs).

Implies that there is no basis behind the belief that partaking ishnan in Amritsar sarovar will wash away one’s sins. He states that it has nothing to do whatsoever with the Gurbani verse: “RamDaas Sarovar Natai || Sabh Utray Pap Kamatai||

Questions the historical reference that;

(1) Amrit could revive the dead (the Panj Pyarays).

(2) Amrit could rid one of previous sins.

(3) States that this kind of belief will convince an Amritdharee to committ further sins.

(5) States that the reference to Guru Gobind Singh of reviving the Panj Pyarays after cutting their “sheesh” are pure lies.

States that Sant Jarnail Singh Ji committed acts that brought about the current downfall of the Panth.  Sant Jarnail Singh Ji desecrated Sri Darbar Sahib when he defended and fortified it.  By giving shastars and motorcycles to the Sikh youth, he (Sant Jarnail Singh) made us into murderers and robbers. Further, states that even after Baba Harnam Singh also joined in, their Panthic wishes were never fullfilled.  He questions their sincerity and wonders if they were are all “bhekhee” (charlatans).

States that to consider that sweet Pittasay were to be used in preparation of Amrit is a Maha-Paap since it implies that,

(2) Dasam Patshah had forgotten the Pittasay and his mistake was corrected by Mata Jito Jee.

(3) States that this Pittasay eposide is a myth and was made up by the enemies of this faith.

Ridicules the concept of Khanday Batay Dha Amrit & reviving of the Panj Pyaray & the divine powers (Shakti) of Amrit. He also refers to Amritdharis as “Papian Di Santaan” (offspring of sinners).

States that for Sikhs, becoming a Singh is a “bharam” (superstition) of the mind. Also states that those who consider Khanday Batay Dha Amrit as becoming “Guru Waley” (inititation into Sikhism) are mistaken.

States Amrit and Naam is BrahmanVaad.

Ridicules the use of this Shabad in reference to Baba Deep Singh Ji deed of fighting with his Shish on his palm.

Accuses that Bhai Randhir Singh Ji wrote that adultery was allowed in the Sikh Rehat.

Ridicules the Sikh tradition of Charan Amrit/Charan Pahul that existed until Khanday Batay Dha Amrit replaced it in 1699.  Refers to it as a Brahmanic ritual.

Tells story of a man who was so fed up with Amritdharis that he cut his Kesh and never kept them again.

States that the Jhal in the sarovar or in the Bata can never be called Amrit. Nor can anyone recite any Bani and turn the water into Amrit. He credits the Brahmins for creating such a belief.

“There is no Shabad in Gurbani in which we can determine or sense any importance or relevance of the late hours of the night or the early hour of the morning which is indicative of any special powers to transform a person who recites Baani at that time.  It does not make anyone immortal.

In those hours a farmer goes to the farms, for the military personal it’s a strategic time to go for the kill and to kill innocent people who are sleeping. The policemen are also trying to catch thieves in those hours, people who capture birds and animals for a living are active in those hours.   Its also the most beneficial hours for dacoits, murderers, anti-national elements and characterless people. After deliberation of the above there is no doubt that such a time can never be “AMRIT VELA”. 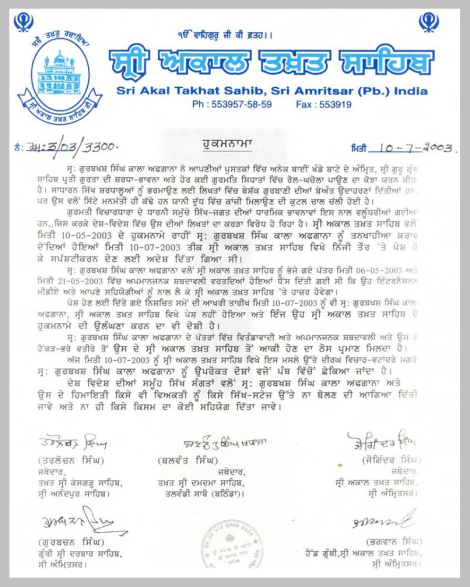