This Shabad is composed by Guru Angad Dev ji in Raag Raamkalee and it is on Page 955 of Sri Guru Granth Sahib Ji. Nanak chinta mat karho is by Bhai Davinder Singh Sodhi Ji.

Gurbani, Shabad Kirtan brought to you by WolrdGurudwara.com. Helping in learning the correct pronunciation and meaning of Shabad Gurbani.

naanak chinthaa math karahu chinthaa this hee haee |
O Nanak, don’t be anxious; the Lord will take care of you.

outhai hatt n chalee naa ko kiras karaee |
There are no stores open there, and no one farms there.

soudhaa mool n hovee naa ko leae n dhaee |
No business is ever transacted there, and no one buys or sells.

vich oupaaeae saaeiraa thinaa bh saar karaee |
He created them in the oceans, and He provides for them as well.

naanak chinthaa math karahu chinthaa this hee haee |1|
O Nanak, don’t be anxious; the Lord will take care of you. ||1||

Guru Angad Sahib (Punjabi: ਗੁਰੂ ਅੰਗਦ ਸਾਹਿਬ) (31 March 1504 — 28 March 1552) was the second of the ten Sikh Gurus. He was born in the village of Sarae Naga in Muktsar district in Punjab, on March 31, 1504 and given the name Lehna. In 1538, Guru Nanak Sahib chose Lehna, his disciple, as a successor to the Guruship rather than one of his sons. Bhai Lehna was given the name Angad and designated Guru Angad, becoming the second guru of the Sikhs. He continued the work started by the first Sikh Guru, Guru Nanak Sahib.

Guru Angad Ji is credited with introducing a new alphabet known as Gurmukhi script, modifying the old Punjabi script’s characters. Soon, this script became very popular and started to be used by the people in general. He took great interest in the education of children by opening many schools for their instruction and thus increased the number of literate people. He collected the facts about Guru Nanak Ji’s life from Bhai Bala and wrote the first biography of Guru Nanak Ji. He also wrote 63 Saloks (stanzas), which are included in the Guru Granth Sahib. He popularised and expanded the institution of Guru ka Langar (the Guru’s communal kitchen) that had been started by Guru Nanak Ji.

Guru Angad Ji, following the example set by Guru Nanak Ji, nominated Sri Amar Das Ji as his successor (The Third Nanak) before his death. He presented all the holy scripts, including those he received from Guru Nanak Ji, to Guru Amar Das Ji. He died on March 29, 1552 at the age of forty-eight. 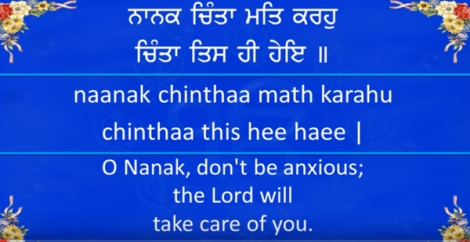