In Part 4A, in which we moved focus to Malaysia, we discussed three major matters i.e.

The first dot point FAITH vs RLC is a very important and critical point for us all to understand.

In Part 4A we discussed this with an example of a person crossing the road and then went on to show how Karminder and the Kala Afghana Brigade use RLC to propagate the Kala Afghana Ideology with two examples, one on Sikhi tenets and one on our historical records.

In Part 4B we exposed the thought process of the indoctrinated Kala Afghana members (Kala Afghana Brigade).

THIS ARTICLE IS A MUST READ EYE-OPENER FOR ALL THE SANGAT OF THE WORLD.

As discussed in Part 3, Kala Afghana in the late 1990s wrote a series of books, Bipran Ki Reet.  These books questioned the very core of Sikhism, i.e. the Sikh tenets and Sikh practices/traditions from the time of our Gurus based on the following verses.

So long as Khalsa retains his distinct identity, I will give him my entire radiance and strength.

When the Khalsa adopts the way of the Brahmin, I will not give the Khalsa my trust and support.

As long as Khalsa remains true to the tenets and practices taught by the Gurus, Guru will provide support the Khalsa in every way.  But when the Khalsa adopts the ways of the Brahmins, then Guru will withdraw my support and trust in the Khalsa

and that these verses are from Sarab Loh Granth which is the composition of Guru Gobind Singh.

Note: Though it is important to understand the meaning of “the way of the Brahmins”, it is not important for the point we are going to discuss”.  It is believed that the KA ideologists are misinterpreting and stretching the meaning to suit their agenda.

The Kala Afghana Ideology has interpret “the way of the Brahmins” as “being ritualistic” and have gone on a rampage to isolate Sikhi from ritualistic practices.  Every act, irrespective of the sharda and devotion behind the act, is interpreted as a ritual.

The irony is the KA Ideology rejects all Granths with the exception of SGGS Ji, BUT use verses from Sarab Loh Granth as the central theme of the KA ideology.

On what basis does the KA ideology stand when its central theme is from a Granth they reject?

Isn’t then the ka ideology a BUNCH OF NONSENSE?  We will see.

The missionary colleges work hand-in-hand with the Kala Afghana Ideologists to propagate this Kala Afghana ideology.

Isn’t the whole world being taken for a ride by the Kala Afghan Ideology propagated by the new age missionaries?

We will look at the anti-Sikhi anti-Gurmat view of this ideology.

The references used in this article are listed below.

It has been exposed in reference [2] that the Missionary Colleges are hand in glove with the Kala Afghana Ideology.  Reference 1 lists the main concepts and Reference 3 looks at Kala Afghana’s views on Dasam Granth.

MAIN CONCEPTS OF THE KA IDEOLOGY

Reference [2] has done an extensive study into the concepts of the Kala Afghana phenomenon.  We liberally use extracts from this reference.  Other references also broadly list the same main concepts.

Figure 1: What the KA ideology criticises

The KA ideology states that

The KA Brigade do not believe in the amrit ceremony performed by Guru Gobind Singh Ji.

The concept of reincarnation

Reincarnation is an accepted concept in Sikhi and well expounded in SGGS Ji, Dasam Granth and the other two canons plus our long time references.

The KA stalwarts view the practices which are SHARDA and DEVOTION related that we perform towards our Gurus and SGGS Ji as BRAHMVAAD and ritualistic.

The KA ideology does not accept the Akaal Takhat Rehat Maryada.  Some of the points are stated below.

Many of the points listed or discussed in other sections also fall into this category for example SRM espouses Akhand Path and KA Ideology rejects this.

NOTE: The KA Brigade in Malaysia ARE LYING when they say that they follow the SRM.  See, in Figure 5, one of the champions of KA/Missionary ideology preaching in Malaysia LYING.  He and his missionaries reject Simran, Akhand Path, Bhog lagauna, the Dasam Granth and then claim that they follow the SRM.  As example see Figure 5 inset (Red box) Article VI(c) of SRM states kirtan of Guru Gobind Singh’s hymns can be recited, but the KA ideology rejects banee from Dasam Granth.  This is a case of WORDS ONLY but NO ACTION – HYPOCRICY in broad daylight.

Figure 5: Words say they follow SRM but actions say NO

The KA stalwarts view the practices, which are SHARDA and DEVOTION related that we perform towards SGGS Ji, as ritualistic.

Figure 7: Bhog lagauna is a ritual

Figure 8: KA Ideology does not accept SGGS Ji as a living Guru

One of earliest contentions preached by the KA and the missionary group was to denigrate Guru Gobind Singh Ji’s composition Dasam Granth (especially Charitro Pakhyan) in a big way.

KA does not spare our Dharmic personalities either.

Personal claims and contradiction of KA

His biographical outline in his books is hard to believe.

This is surprising since he went to Canada around 1984, at the age of 62 (birth 1922) and was involved in court matters for a substantial period of time. His writings came out towards late 1990s.

Reference [2] raises a number of questions to KA about his writings.  One of the major ones is presented below.

The author of [2] reveals that there are substantial lies in KA’s Bipran Ki Reet Ton Sach Daa Maarag Second Ed pages 12 to 17 where he outlines his autobiography.

The Missionary Colleges are strongly linked with the Kala Afghana Ideology.

In reference [2] Ajit Singh has clearly identified this link.  Extracts from his book below in Figures 10 and 11 clearly expose this link.

Figure 10: Bathing in sarovar is brahmvaad

Considering this therefore there is a good likelyhood that the sarovars will be converted with the necessary decoration for beautification and modified to attract children to the Gurdwaras.

Figure 11: KA and the Missionary Colleges are against Dasam Granth 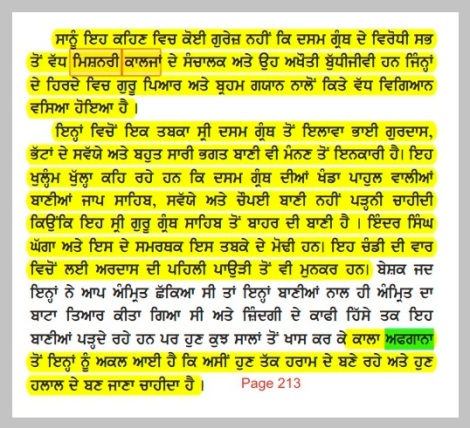 Further their common belief and ideology is shown in Figure 11.  Reference [2] states that

Figures 10 and 11 are only two examples provided.  There are many other parts in reference [2] where the Missionary Colleges are shown to be aligned to the Kala Afghana ideology.

In fact it is not wrong to say that they, the missionaries, are a major part of the Kala Afghana Brigade.  Their main role, since they are involved in Gurmat education, is the propagation of the Kala Afghana Ideology through its graduates and staff.

Links with other organisations

References [1], [2] and [3] have broken down the writings/concepts by KA, putting it politely, to nonsense.

Reference [2] (see Figure 13) states that, KA has essentially raised questions on Sikhi tenets, practices and prominent personalities, with a “Bipran Ki Reet” Brahamvaad ritualistic oriented, sharda or devotion devoid, perspective.  But no solution is provided for the questions raised.

KA has not provided any useful spiritual Gurmat teaching in his writings.

Therefore the KA writings can be relegated good just for the dump yard.

A summary of the main anti-Sikhi anti-Gurmat ideology of the Kala Afghana Brigade has been outlined.  The links of the Missionary Colleges to the Kala Afghana Ideology have been explicitly exposed.

The verdict of the Kala Afghana writings in his Bipran Ki Reet series on books has been identified to be full of “nonsense” and anti-Sikhi anti-Gurmat views.

The Kala Afghana Ideology has interpret Bipran Ki Reet “the way of the Brahmins” as “being ritualistic” and have gone on a rampage to isolate Sikhi from ritualistic practices.  Every act, irrespective of the sharda and devotion behind the act, is interpreted as a ritual.

Kala Afghana ideology has thus only questioned Sikhi tenets and practices/traditions with this narrow ritualistic oriented, sharda devoid perspective.  Nor has this ideology provided any Gurmat related teaching in the writings.

The Missionary Colleges and their associates are going around propagating this anti-Sikhi anti-Gurmat nonsense.

Sangat Ji please Beware of these Missionaries and the Kala Afghana Brigade who are hell bent on propagating this ideology. 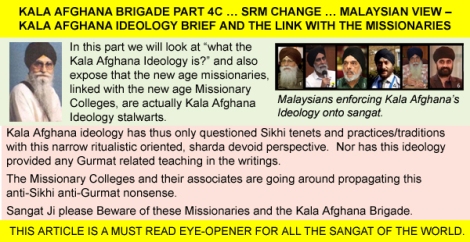