This senseless wild imaginative conjectural declaration by a learned university Don, who claims that he is Professor and Doctor, had sent shock waves among the Sikhs of the Guru.

This post is in continuation of two earlier posts.  Writers differ on many issues and that is academic issue, but when some one inflated with ego of his Degrees wilfully issue a unhistorical statement then it is called BLUNDER.

I have already demolished his motivated and malicious propaganda of this learned university Professor in my two earlier posts with irrefutable documentary evidence, which like Ragi arshan, Ghagha, Dilgeer, Dhunda, Kala Afghana team, he has challenged with perjurious averments.  Today I am uploading the following documents to reduce his motivated propaganda to nugatory:

(4) Photograph Of Book Release Of Dr Kamalroop Singh and Gurinder Singh Maan On Dasam Granth In USA where the learned Professor-Doctor of the university was present and can be partially seen.

(5) Two Pages from a Contemporary Record written by Mangal Singh of Lachhamipur (Bihar), giving eye-witness Account Of last 20 Days Of Guru Gobind Singh ji with date and time of each event. On the second page it is clearly stated that at the Bhog Ceremony Of Guru Sahib Sawaye From Akal Ustati were recited.

(6) Passages From Kesar Singh Chhiber’s Bansavalinama, frequently quoted by this learned university Professor in his speeches.  Interested readers can listen his lectures on Akal Channel, telecasted recently and commented by me on each aspect.

(7) Passages his book on Dasam Granth with dates and facts, which are not only patently wrong but self-contradictory and self-defeating.

(8) Letter Of Bhai Mani Singh with printed text to Mata Sundari Ji, discussed by Harbhajan Singh in detail in his book but without checking up the dates which he had given, demolishing his recent misleading statement to the hilt.

The Historical Knowledge Of Professor and Dr Of a University,Of Which He is so proud

Some people do not see what they have already written or spoken in Lectures like our University Don, proud of his Degrees and Post Like Pundit Lal Chand during the times of Guru Hari Krishan.

(i)Kesar Singh Chhiber in his Bansavalinama says that The Sangat requested the Guru to Bind two Granths -Guru Granth Sahib and Dasam Granth- in one Volume in 1698CE. (10:390).

The learned Dr Professor Harbhajan Singh has frequently quoted this verse in his book as well as lectures available on YouTube. Let him now tell which Bir of Dasam Granth is mentioned here in 1698CE?  What are the considerations which prompelled him to contradict his writings and statements now?

(ii)See the Page Upload From His Book On Dasam Granth In Which he says that in 1778Bk/1721CE Mata Sundari appointed Bhai Mani Singh As Head-Granthi Of Harimandar Sahib. The cut and paste history of the university Professor is not supported by any historical source except Kesar Singh Chhiber’s Bansavalinama.  Now will this learned University

(a) From Where Mata Sundari sent Bhai Mani Singh to Amritsar.

(b)Where was Mata Sundari in 1721CE as per historical records.

(e)What is the date of completion of Bhai Mani Singh’s combined Bir Of Guru Granth Sahib and Dasam Granth Sahib?

(f)From Which Pothis Bhai Mani Singh ji prepared the Dasam Granth Bir When No Pothi prior to it was prepared during Guru Gobind Singh’s time.

(g) When There was no Bir Of Dasam Granth before the demise of Guru Gobind Singh ji then from where Kavi Sainapati quoted vereses Of Dasam Granth In GUR-SOBHA In 1711CE, and writer of PREM SUMARAG GRANTH In 1711 CE.

The learned writer of Punjabi University, Dr Professor Harbhajan Singh has highlighted this fact also in his articles in Sant Sipahi Magazine, Jalandhar.

We have seen chameleons changing colours but not the learned fraternity of universes. Let him speak out the considerations for which he has wilfully given this unhistorical, self-contradictory and self-defeating sweeping statement.

With a promise to upload another post on this newly created sensitive issue tomorrow. 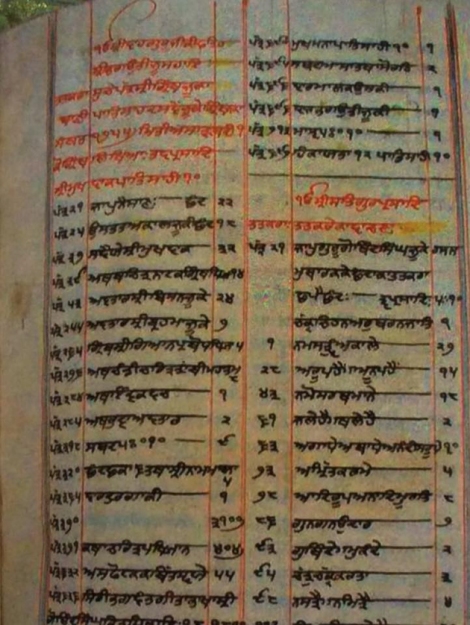 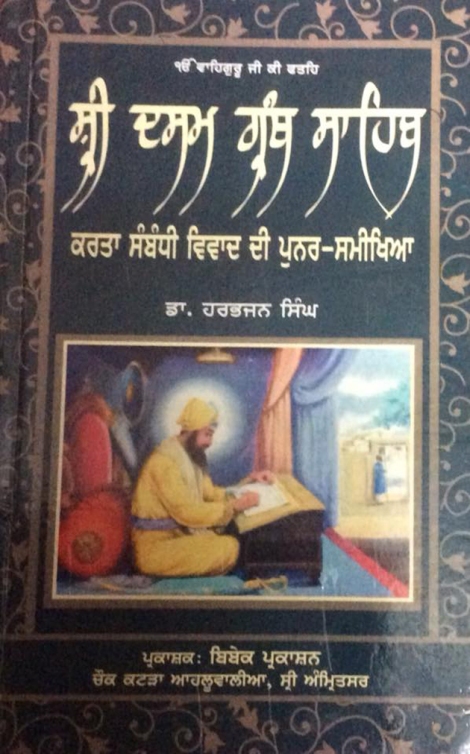 32 Title of the book of Dr Harbhajan Singh on Dasam Granth with cut and paste, in a haste without waste, historical records on compilation of Dasam Granth and appointment of Bhai Mani Singh ji As Head Granthi Of Darbar Sahib 1721CE. 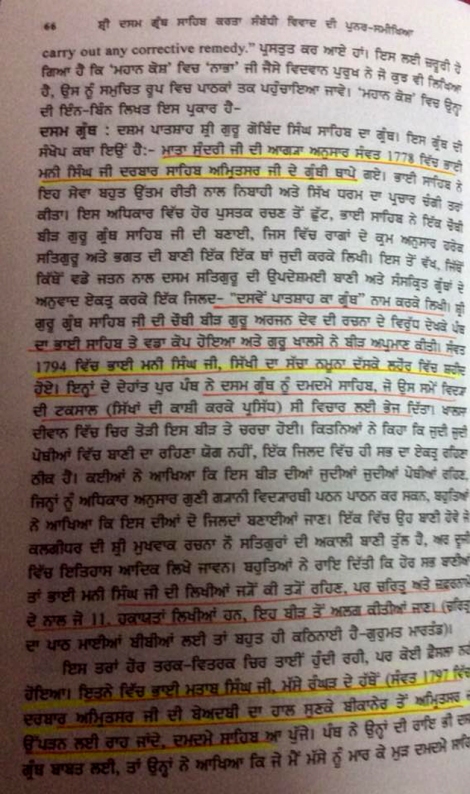 33 Page from the book of the learned university Professor that Bhai Mani Singh was appointed Head Granthi Of Amritsar in 1721CE. 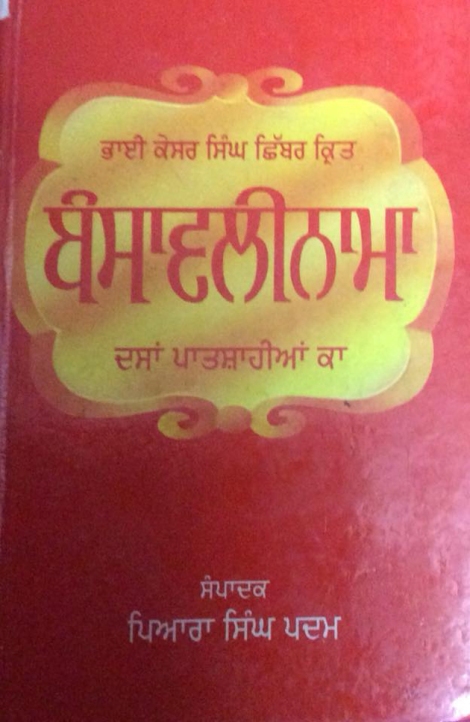 34 Title of the source of the learned university Professor, Bansavalinama from where he quoted that Dasam Granth was prepared in 1698CE., but now the opinion is changed, contradicting his own earlier writings. 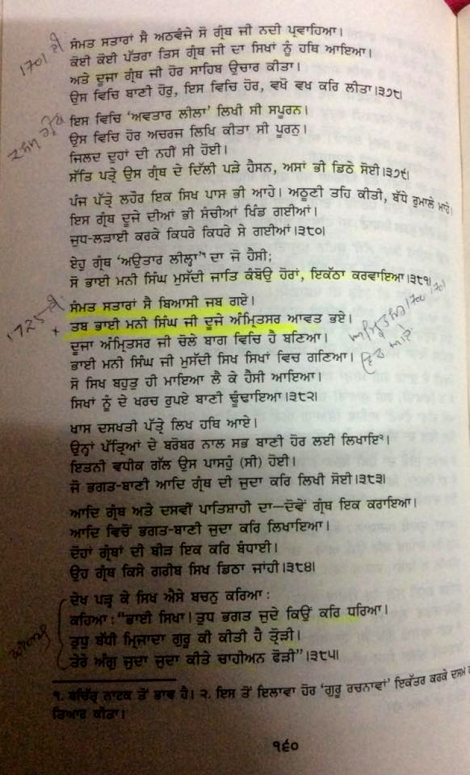 35 Source of Dr Harbhajan Singh that Bhai Mani Singh was appointed Head Granthi Of Darbar Sahib In 1721CE.The Date is patently wrong and accepted by the writer uncritically, a new research methodology not to be found in any book. 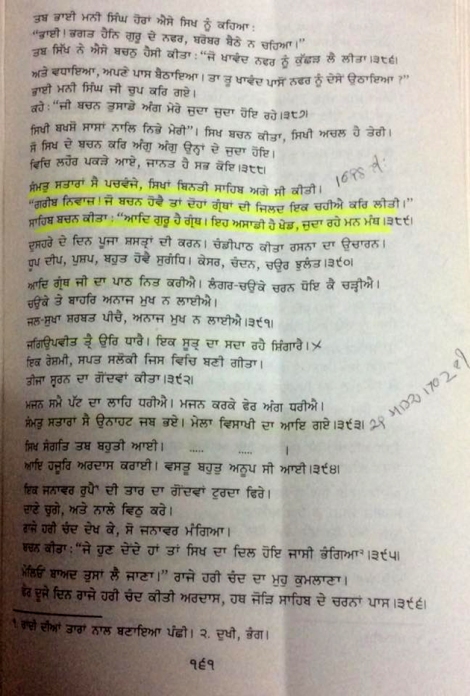 36 The evidence of Bansavalinama frequently quoted by Dr Harbhjan Singh in his books and lectures that Dasam Granth was compiled in 1698CE. What happened now to the intellect of the Professor, Of Which He is so proud. 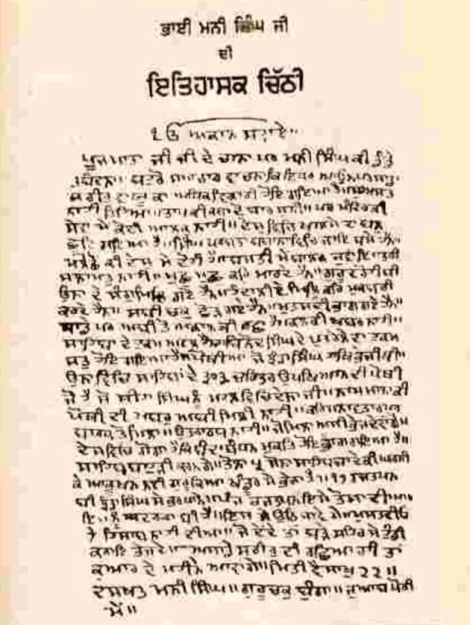 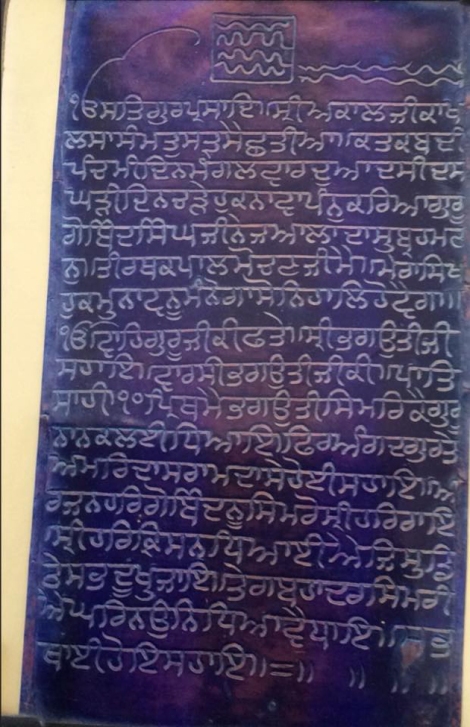 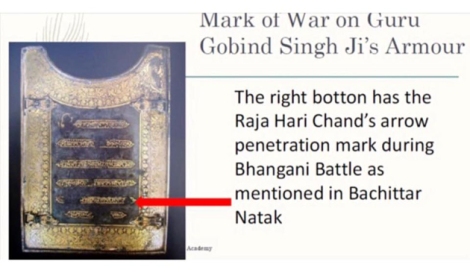 40 Chirana Of Guru Gobind Singh ji with Verses from Dasam Granth and arrow mark received during the Battle Of Bhangani(1688CE) And was shown by Gurinder Singh Mann in New York Lecture in the presence of Dr Harbhajan Singh. 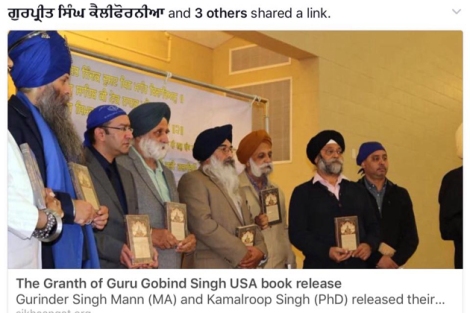 41 Book on Dasam Granth with details on earliest manuscripts by Dr Kamalroop Singh and Gurinder Singh Mann released in USA in the presence of Dr Harbhjan Singh. But except his own writings he cannot see and accept any other writing of others. 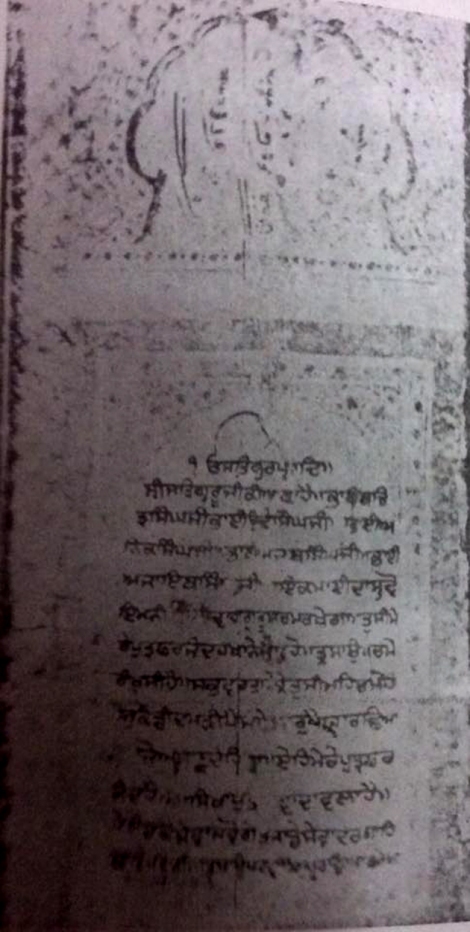 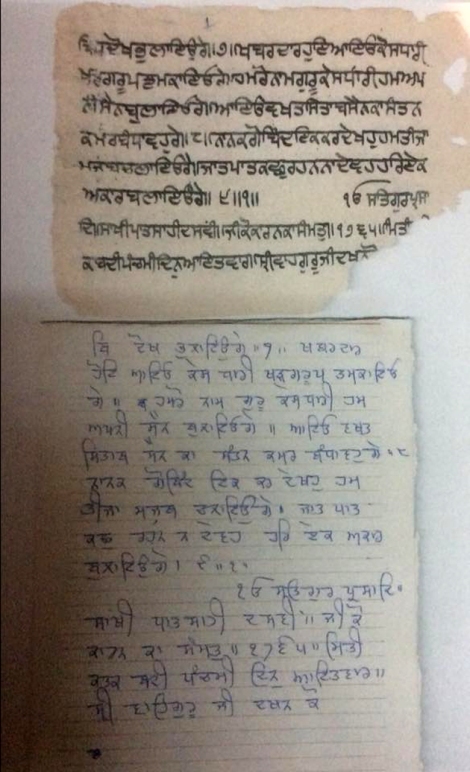 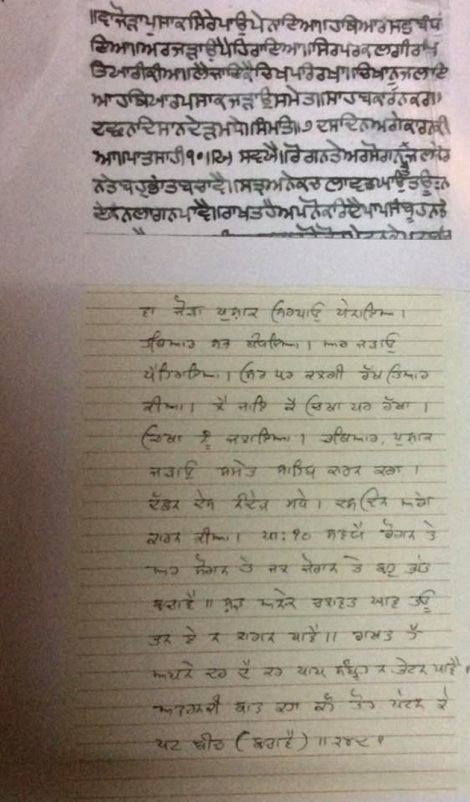 44 Last page of historical document by Guru Gobind Singh’s Sewak Bhai Mangal Singh Lachhmipur informing that on the Bhog Ceremony Of the Guru Verses from Dasam Granth (Akal Ustati) were recited. But still our writer with a tag of university Professor is befooling the Sikhs all over the world that during Guru Gobind Singh’s Times Dasam Granth was not compiled. 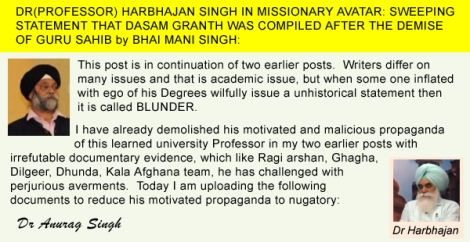