Note: MGC letter and the Akaal Takhat Adesh with English Translation are attached as PDF files.  The Punjabi version is found at the end of the article.

MGC has rejected the Sikh Rehat Maryada via its letter dated 17-Nov-2017 advising all the Sangat and Gurdwaras to follow the Nanakshahi calendar.  See Figure 1.

This means the Guru Gobind Singh Ji’s Prakash according to MGC should be celebrated on 5-Jan-2018.  This is going against the Akaal Takhat Adesh (see Figure 3 which is extract from the English translation of the Adesh). 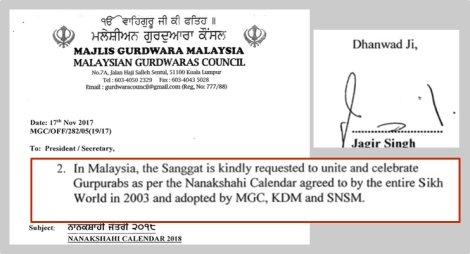 Why do we say they reject the SRM?  This will become clear in the ensuing.

SIKH REHAT MARYADA ON THE SUPREME AUTHORITY OF THE SIKHS

The Sikh Rehat Maryada states there are five Takhats, THE SEATS OF HIGH AUTHORITY, for a Sikh (see Figure 2).  This means, for a Sikh, the decisions of the Takhats on the matters of Sikhi tenets and practice, are binding.

Rejection of the advice (Gurmatta, Matta, Adesh etc) of the Takhats is tantamount to rejecting the Sikh Rehat Maryada.

WHAT DOES THE AKAAL TAKHAT SAY

The Akaal Takhat had advised that Guru Gobind Singh Ji’s Prakash should be celebrated on 25-Dec-2017 according to the Bikrami Calendar dates.  See Figure 3.

It is now clear that MGC rejects the SRM by rejecting theAkaal Takhat adesh.

MGC presents lies to support the Purewal’s Nanakshahi Calendar which has been rejected by the Akaal Takhat.

Most of the background facts in MGC’s letter are a shameful distortion of the truth.

Practically all the “MGC Facts” are actually “bull***” meant to mislead the Sangat and the Gurdwaras.

The appendices attached are extracts or posts from Kala Afghana aligned missionary type individuals or organisations.

This cements the fact that MGC, SNSM and KDM are TRUE BLUE KALA AFGHANA SNAKE BRIGADE.

It is clear that MGC, SNSM and KDM reject the Sikh Rehat Maryada.

The main motive for this rejection is that they are aligned with the Kala Afghana Ideology.

They propose the use of the Indian Saka Calendar based Purewal’s Nanakshahi Calendar which has been rejected by the Akaal Takhat.

To support their proposal of the rejected Purewal’s Nanakshahi Calendar, they list bunch of “Facts” which are actually a shameful distortion of the truth.

Sangat Ji, do you want to support such who hide THEIR TRUTH to propagate THEIR FALSEHOOD by misleading the Sangat.

The decision is yours Sangat Ji. 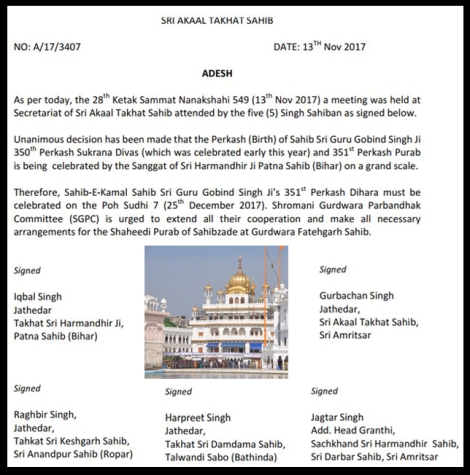 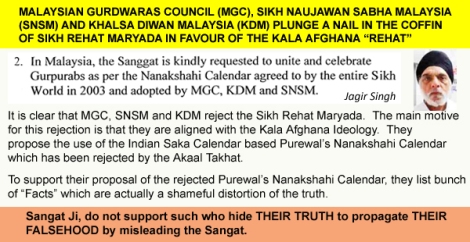