The article below is based on the video posted above.

In year 2000 a 325 year discovery was made at Gurdwara Natha Sahib, Kapurgarh.  Our Sixth Guru Guru Hargobind Ji had visited this place.

This discovery included Sri Guru Granth Sahib, Dasam Granth and a number of Artefacts.  This is the place where Guru Hargobind Ji had visited.

The Granthi of the Gurdwara, Bhai Baljit Singh, was a key figure in this discovery. 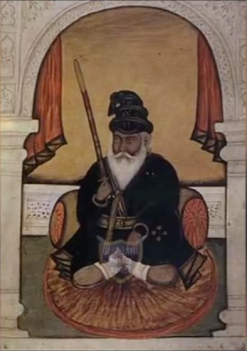 He joined the regiment of the Misl Shaheedan, founded by Shaheed Baba Deep Singh Ji (1682-1757), the great Sikh Warrior, and Martyr, and the first Damdami Taksal Jathedar, based at Talwandi Sabo, in the Malva region of Punjab. In 1781, at old age, Baba Natha Singh Ji, succeeded by Baba Karam Singh, and became the Jathedar of Misl Shaheedan, for three years he served the Khalsa Panth, as the Leader of the great Misl Shaheedan.

Shaheed Baba Natha Singh Ji, along with Baba Dyal Singh, were appointed as the administrator of Sialkot, after the Sikhs took over the area of Sialkot, from Pathans. The Bhangi Misl, one of the 12 Sikh Confederacies, had secured all of the Sialkot District, of Punjab. Baba Natha Singh, looked after the Sikh Shrines of Gurdwara Bair Sahib (Sialkot), and Gurdwara Baoli Sahib, Sialkot (City). He also, managed the Gurdwara Tham Sahib, Patshahi Panjvin, at Kartarpur, in Jalandhar District of Punjab, and was also in charge of the Jalandhar area. He was succeeded by Akali Baba Naina Singh Ji (d. 1800), who made Amritsar, his main seat.

In 1784, Baba Natha Singh attained Shaheedi, the Sikh Misldars (Chieftains), built, a Samadh on the spot, It was managed by the Sikh priests, The Prakash of Guru Granth Sahib, used to take place until 1947 partition took place, The Samadh is a very rare Sikh Heritage about 228 years old, building, constructed during the reign of the 12 Sikh Misls.

The precious find was in year 2000 at the location of Gurdwara Baba Natha Singh at Kapurgarh (see Figure 3).  One of the key figures in this was Bhai Baljit Singh, the Granthi of this Gurdwara.

Three cabinets (sandookhs) were found in one of the rooms in which Guru Granth Sahib, Dasam Granth and the artefacts were found.  The Guru Granth and the Dasam Granth were stuck together as well as the Angs were also stuck together.  It took Bhai Baljit Singh and his team three years to dry the Granths in the sun and have them and the Ang separated so the Sangat could have Darshan of this precious find.

The picture of the 325 year old Guru Granth Sahib is shown in Figure 5. 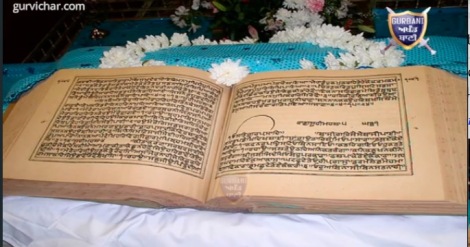 Darshan of the 325 year old Dasam Granth.  Figures 6 to 8 are snapshots of the Dasam Granth Sahib.

Bhai Baljit Singh pointed out that

Figure 7: Jaap Sahib in the 325 year old Dasam Granth – At the top of the upper image is shown the first two lines with the text shown in separated words in yellow text

Figure 8: Charitro Pakhyan in the 325 year old Dasam Granth – At the bottom of the upper image is shown the first two lines with the text shown in separated words in white text 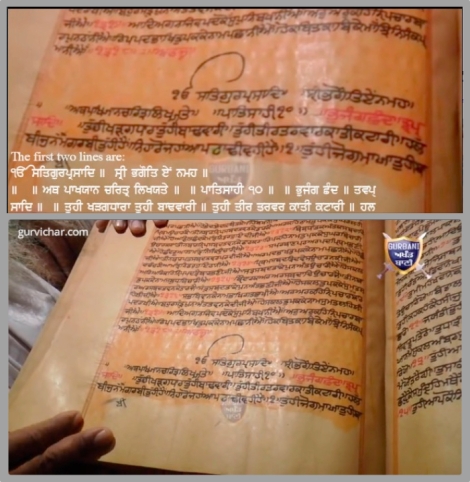 Figure 7 and 8 clearly show that Jaap Sahib and Charitro Pakhyan were a part of the Dasam Granth 325 years ago.  That was before Guru Gobind Singh Ji’s ascension in 1708.

A further important point to note is that Guru Gobind Singh Ji had given both the hand written Guru Granth and Dasam Granth.

THIS CLEARLY IS AN INDICATION THE GURU GOBIND SINGH JI WAS TRUE TO HIS WORDS, when he stated the following

The tenth King has given the Guruship to the Granth Sahib.

In 1658 Bikrami the Adi Granth took birth [was created].

In the house of Guru Arjan Dev Ji the Granth Sahib took its birth.

So, recognize both Granth Sahib’s as Guru and brothers.

The NINDAKS claim that Guru Gobind Singh Ji did not compose Dasam Granth.

The question to these MOORAKS is

“how come Guru Ji gave both the Guru Granth and the Dasam Granth to Baba Natha Singh around 1700?”

Besides Guru Granth and Dasam Granth a number of artifacts (martial mostly but included a rosary (mala) and a sitar.  See Figure 9.

Figure 9: Artefacts (including a MALA) given to Baba Natha Singh by Guru Gobind Singh

The presence of the MALA or rosary is clear evidence that Guru Gobind Singh professed both SIMRAN (MEDITATION) and the use of a MALA.

are all wrong and are preaching and propagating FALSE DISGTORTED SPIRITUAL teachings to the unsuspecting SANGAT.

This video reveals one of the most precious discovery of recent times.

We must thank Bhai Baljit and his team for the painstaking LABOUR OF LOVE TO GURU JI in the efforts they made so we can have Darshan of such a valuable discovery.   We must also thank Gurbani Akhand Bani for bringing this information to the Sangat at large.

This discovery testifies to the fact that

all wrong and are preaching and propagating FALSE DISGTORTED SPIRITUAL teachings to the unsuspecting SANGAT.

SANGAT JI.  PLEASE KEEP AS FAR AWAY FROM THESE MOORAKHS NINDAKS.  DO NOT ASSOCIATE WITH THEM.

THEY WILL TAKE US ALL TO THE BOTTOMLESS PIT.

The complete video produced by GURBANI AKHAND BANI is posted below.