Prof Inder Ghagga creates controversy and splits the Sangat wherever he goes.  Why?  He subscribes to the DIVISIVE KALA AFGHANA IDEOLOGY.  Why DIVISIVE? Because this ideology goes against  OUR LONG TERM TEACHINGS FROM OUR GURUS AND AS PRACTICED BY OUR FOREFATHERS.  Some of the key beliefs of Prof Inder Gaggha are shown in the picture below.

There was a Gurbani Vichaar program at the Seremban Gurdwara whereby some the Sangat who were believed to be not subscribing to the Kala Afghana Ideology were prevented from going into the Gurdwara for the religious program.  The program was cited to be a private function.

We share the opinion of the Sangat below.  We have tried to include as many of the Sangats’ comments as possible (comments taken from SGGS Academy FB page which showed the event live and has now posted the video recording at its FB page) but included a cross-section without making this report too long.  We apologise to the members of the Sangat whose comments we missed.  A summary of the comments follows (our comments in italics):

On point (8):  NOTE THAT DOING THIS MAY BE A PROBLEM BECAUSE THE SANGAT (i.e. Public) MONEY IS MOST LIKELY USED TO FUND THIS RELIGION BASED PROGRAM.  HOLDING SUCH FUNCTIONS IN A HALL OR HOTEL MAY BE UNSANCTIONED AND AGAINST PRUDENT PUBLIC MONEY FINANCIAL MANAGEMENT. 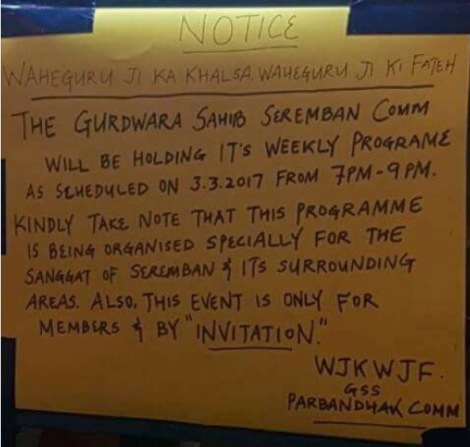 What does the Sangat say (sensitive comments were removed):