On 1st March 2017, the Executive Committee (EXCO) of Gurdwara Sahib Greentown Ipoh despite having been advised and provided with copies of Sandesh (Instructive Message) from the supreme decision making authority of Sikh Panth Sri Akal Takhat Sahib (SATS) to bar Professor Indar Singh Ghagga from carrying out any speeches in Gurdwaras worldwide had intentionally contravened the instruction of the supreme body by proceeding to provide the Gurdwaras’ stage in the presence of Sri Guru Granth Sahib Ji to the speaker, much to the disagreement of the sangat (sikh congregation) of Malaysia.

The image copies of the Gurmukhi and the English translations of the Instruction is provided in image 1&2 respectively below. (Sorry for the lack of clarity of the gurmukhi copy). 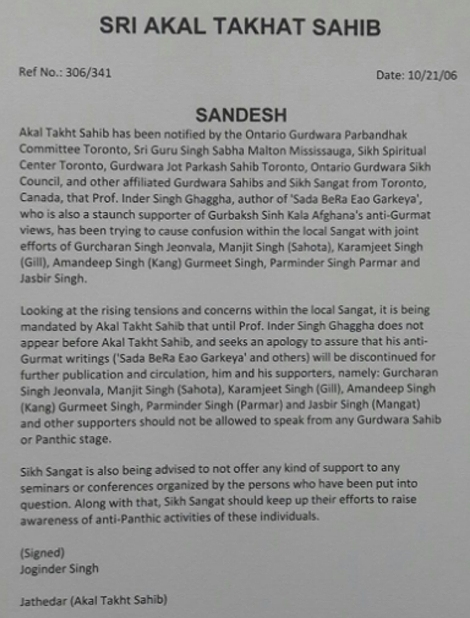 In the end of paragraph two of the letter it is clearly mentioned that Ghagga and his supporters “should not be allowed to speak from any Gurdwara Sahib or Panthic Stage”. The corresponding paragraphs in gurmukhi and english are presented in images 3 & 4 below respectively.

Among the serious allegations stacked against Prof. Indar Singh Ghagga are depicted below in image 5

Why did the EXCO of the Gurdwara Contravene the Instruction from SATS?

Despite the above Instruction being made available to the Gurdwara EXCO and the threat of a backlash from a great majority of the sangat, the decision to proceed with the programme is akin to playing with fire and raises doubts on the wisdom of the EXCO. The EXCO must be made to answer to the begging question: Why did the EXCO of the Gurdwara Contravene the Instruction from SATS?

The Contorted Views of The Malaysian Gurdwaras Council (MGC)

The icing on the cake was a letter issued by leadership of the above council which seems to have lost it’s vision on the true teachings of Sikhi and which is heavily reliant on the views of an individual by the name of Karminder Singh whose views on Gurmat (Guru’s teachings) are deviant in nature. A list of articles are provided below for your reference. Click on the titles to read the articles.

From the above articles one can conclude that Karminder’s anti-gurmat views are similar to Kala Afghana Cultists that are bent on entirely changing the deeply entrenched doctrines of Sri Guru Granth Sahib Ji and Sri Dasam Granth Sahib Ji, causing much disunity and hostility in the community which may lead to loss of young and innocent lives.

The MGC’s letter is presented below with my responses to some of the blatantly contorted views. Refer image 6 & 7. 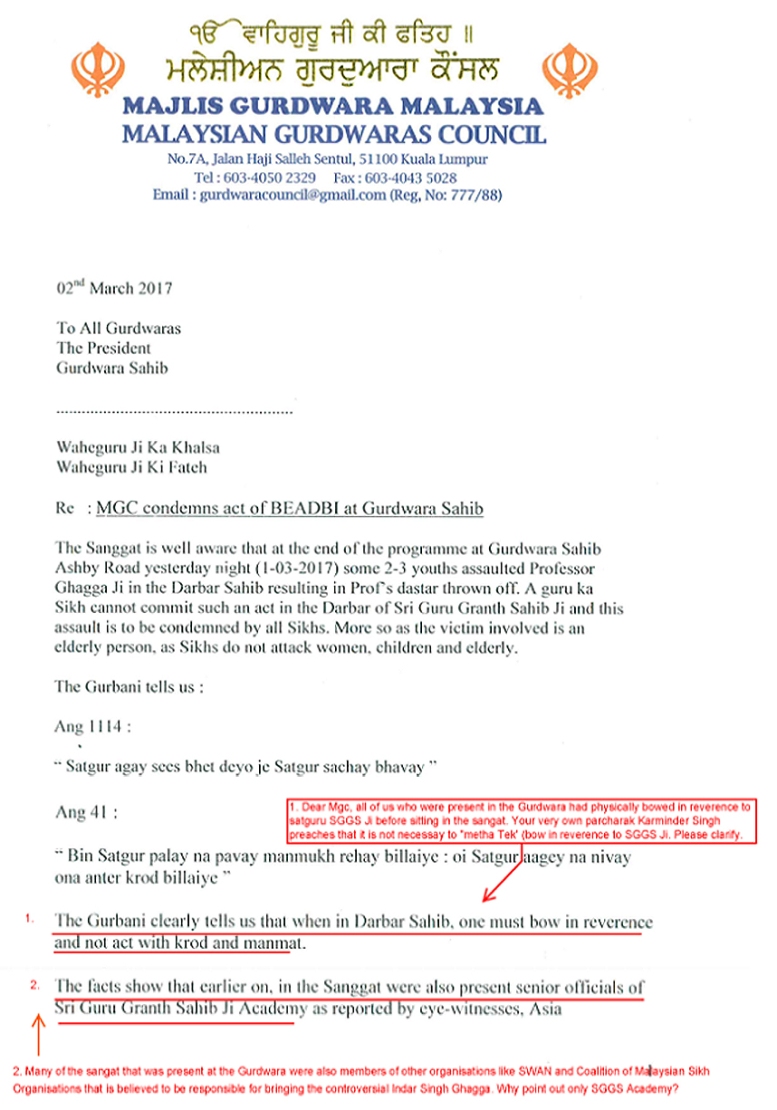 Image 6: MGC’s Letter with my Responses in Red-Page 1

Added by Gur Vichar, as text in red could be too small for reading

1. Dear Mgc, all of us who were present in the Gurdwara had physically bowed in reverence to satguru SGGS Ji before sitting in the sangat. Your very own parcharak Karminder Singh
preaches that it is not necessay to “metha Tek’ (bow in reverence to SGGS Ji. Please clarify.

2. Many ofthe sangat that was present at the Gurdwara were also members of other organisations like SWAN and Coalition of Mallaysian Sikh
Organisations that is believed to be responsible for bringing the controversial lndar Singh Ghagga. Why point out only SGGS Academy?

Image 7: MGC’s Letter with my Responses in Red-Page 2

Added by Gur Vichar, as text in red could be too small for reading

3.Agreed with MGC that there should not be any disruption ofa planned programme. Howeverthe EXCO ofthe Gurdwara is elected by the sangat and must serve the sangat. The sadh sangat is higher than Guru and the EXCO. Ifthe majority of the sangat present at the Gurdwara was against the decision of the EXCO that wanted to give the Guru’s stage to a speaker that has been banned by Sri Akal Takhat Sahib then the EXCO should have
listened to the wishes of the sangat and cancelled the programme. This is clearly a case of high handedness by the EXCO which fell into the trap of EGO and went on to have THEIR planned programme. This is serious transgression ofthe ancient Sikh Rehet Maryada that MGC has conveniently forgotten just to please their parcharak Karminder Singh.

4. So MGC has admitted that it does not want to be “Maligned” to Prof. lndar Singh Ghagga. This statement shows that MGC is aware ofthe controversies surrounding the Prof and is playing it safe by saying it does want to be connected to him but chose to close and eye about it. Instead of reprimanding \ and condemning the Gurdwara Committee, MGC chose to denigrate and resort to name calling the Sikh sangat by using words like “Taliban’ to members of the sangat who were there to stand united with the ‘ supreme body of the Sikh Panth, the Sri Akal Takhat Sahib Ji. Is this term Taliban being used because many ofthe Naujwans that were present on that day were wearing round turbans? The MGC must be made to apologise for making such a statement.

CONCLUSION
The views of MGC expressed in this letter is clearly a sign of serious deterioration in it’s present leadership. The serious and blasphemous misconduct oftheir parcharak Karminder Singh who has preached against the doctrines of ancient sikh rehet maryada that is contained in SGGS Ji as pointed out in point “1” above where he had preached against the metha tekna to SGGS Ji is one ofthe many leading causes ofthe disunity
in the Sikh Panth in Malaysia.  I personally and unequivocally hold MGC and Karminder Singh fullly responsible for the scuffle that broke out in the Gurdwara. The Council has
betrayed the trust of the Sikh Sangat of Malaysia and must take responsibility forthis untoward incident. Meanwhile I urge the Sikh Sangat of Malaysia to mull the idea ofa nationwide SARBAT KHALSA to bring the individuals who brought Ghagga and Karminderto justice. The Sangat is supreme. Lest we forget.
Sarab Sher
(Vegetarian Taksali Blogger)
https://.sarabhealthwealth.com

The MGC led by Karminder’s Kala Afghana ideology embarked on a nationwide parchar to influence the Sikh Sangat to stop the singing and reading of Sri Dasam Granth Banis, to stop the Metha Tekna (bowing in reverence) to Guru SGGS Ji, stop Nam Japna (devotional meditation), and stop the Amrit vela (rising before dawn to meditate and pray) disguised under his pet project with a catchy slogan “Ek Panth, Ek Granth, Ek Maryada”.

Refer image 8 below for the verse and  the meanings by Dr Sant Singh Khalsa in English and Prof. Sahib Singh in Gurmukhi. Refer Image 9 for meaning of the word ਫਾਕੈ  as given in Mahan Kosh by Bhai Kahn Singh Nabha.

Yes you read it right. The word  actually means FUCK and is pronounced as FUCK-ay. Now tell me all you morons who are anti SDG, are you also going to dispute that this is also not Guru’ Bani in SGGS Ji?

Clarion Call to the Malaysian Sikh Sangat to Rise

Dear Sadh Sangat of Malaysia, you are our only hope left to stop MGC right in it’s disastrous path. You the silent majority Khalsa must now make yourself heard and show them that Guru Gobind Singh Ji’s Ladli Fauj is still alive coiled like a serpent. When this serpent awakens it can destroy any enemy in the world. It is time for you awaken and crush the Ek Granth cultists. The time is NOW!!!! If you don’t rise to the occasion now you risk being barred from doing your Ardas in Gurdwaras. Because even your Ardas is from Chandi Di Var of SDG.