Mr.Harcharan Singh, being a representative of BJP-RSS demanded Delhi West Seat during Lok Sabha Elections of 2014. But that seat was already decided by the BJP-RSS for Sahib Singh Verma’s son. Consequently, by the intervention of a Delhi Akali leader this special person was adjusted in SGPC by creating a

(This information has been received by me on my messenger through one of his colleagues,a retired AGM of the Bank)

which he could not control in spite of his power, position and highest salary.  This is sufficient to conclude that he is doing his job of creating confusion, internal fights and mismanagement as per his allotted mission.He is continuing the job in spite of 50% reduction in his salary i.e.demotion.

Secondly, he is actively working in collusion with the

Thirdly, enter the holy DARBAR SAHIB and see the Instructions in English, written by this self-styled expert in English.  On the cause-way you will find two placards with the following instructions:

Holy Communion when translated into Punjabi denotes: “Sadh Sangat”.  No body throws Sadh Sangat in the Sarovar.  For Kraha Prasad the word used by Sikh Theologians and Scholars like Dr Trilochan Singh and Sirdar Kapur Singh is:”SACRAMENTAL FOOD”.  Similarly, at the centre for collecting donations for Community Kitchen near Ramgarhia Bunga it was written: “Deposit money for Langar here.”  A South Indian pilgrim pointed out this gross error and change was made, but still Babu English prevalent in Punjab during 1930-40s is written.

May Satiguru saves his Panth from such half-baked Gianis, mischief mongers and controversial Bhekhi Sikhs, working for downfall of Guru Panth and SGPC.

His partners in Malaysia are now finding place to secretly organise their meeting in some hotel even after misusing the name of SGPC with his Blasphemous Notice.  This is the power of Truth, which forced this gentleman to seek premature retirement even from the Bank.

Down with Malechh Khalsa and their Partners in SGPC. 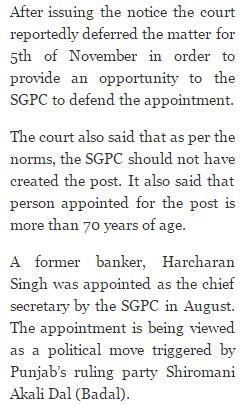