A) Objectives of the GSC

The extract from the GSC website Home Page shows the objectives of the GSC.

What is the stand of GSC on the concept of LIVING GURU espoused in the Sikh Faith?  This is not mentioned in the objective by GSC on its home page.

We must look elsewhere for the answer.  It is highlighted that the statement by Lord Indarjit Singh, one of the LEADING FIGURES in GSC (as claimed by MGC) stated in Asia Samachar of 15-Jan-2017 (LINK A) that

The metaphor ‘living Guru’ emphasises the importance of the Guru Granth Sahib to Sikhs. Unfortunately, as we see in some gurdwaras, some Sikhs take this too literally. I think it is better to describe it as the embodiment of the Gurus’ teachings and the SOLE perpetual guidance for all Sikhs. We emphasise the importance of the Guru Granth Sahib every time we conclude the Ardas with: ‘Saab Sikhan ku hukum ha Guru Manio Granth.’

The word metaphor means “A figure of speech in which an expression is used to refer to something that it does not literally denote in order to suggest a similarity”.  This clearly means that Lord Singh DOES NOT ACCEPT the concept of LIVING GURU as espoused in the Sikh Faith.  The phrase “SAAB SIKHAN KU HUKUM HA GURU MANIO GRANTH” is conveniently quoted ignoring the following phrase “Guru Granth Ji Manio PARGAT GURAN DE DEH” which clearly and unequivocally states that Sikhs must accept that Guru Granth as MANIFESTED EMBODIMENT of our GURUS.  This phrase does NOT SUGGEST even remotely that LIVING GURU means a METAPHOR.

The statement “The metaphor ‘living Guru …”, made over the media internationally, by a leading figure of GSC, cannot be claimed to be personal.  The belief that LIVING GURU IS A METAPHOR is most likely built into the psyche of the person making such a statement and expected to ooze into all activities the person is involved in.

The above analysis questions whether GSC accepts the SGGS Ji as a LIVING GURU.

The SGGS Ji appears more to be a GUIDE BOOK (GRANTH) implied by the statement “guidance for all Sikhs” by Lord Singh.

Is the MGC trying to MISLEAD THE ADRESEES of the letter by claiming that GSC believes in the concept of LIVING GURU?

B) Gur Vichar mischievously written that GSC is Panth Dokhi

The Gurmatta from Akal Takht issued on 6 June 2008 clearly and unequivocally states that the Dasam Granth is an inseparable part of Sikh History and Literature and the entire Sikh Panth is to accept the Dasam Granth in addition to the SGGS Ji which is also our LIVING GURU.

The call for “Ek Granth” meaning ONLY ONE GRANTH, implies rejecting any other Granth and this includes the Dasam Granth?

Firstly that SGPC can pass a resolution (Hukamnama) for the entire Sikh Panth is HIGHLY QUESTIONABLE.  According to Wikipaedia and Encyclopaedia of Sikhism (Ed Harbans Singh by Punjabi Uni Patiala) “The Shiromani Gurdwara Parbandhak Committee (or SGPC) is an organization in India responsible for the management of Gurdwaras, Sikh places of worship IN THREE STATES OF PUNJAB, HARYANA, AND HIMACHAL PRADESH AND UNION TERRITORY OF CHANDIGARH.  The jurisdiction of SGPC does net even cover the whole of India, let alone the world.

Secondly the role of SGPC according to Wikipaedia is “The SGPC manages the security, financial, facility maintenance and religious aspects of Gurdwaras as well as keeping archaeologically rare and sacred artifacts, including weapons, clothes, books and writings of the Sikh Gurus”.  It is pointed out that this role applies only to Gurdwaras in three states of Punjab, Haryana, and Himachal Pradesh and Union Territory of Chandigarh.  The role of passing Hukamnana for the Sikh Panth is NOT EVEN REMOTELY the role of SGPC.

Thirdly this document is claimed to be a false document.  See article at LINK C.

The Sangat will wisely judge and act accordingly.

D) The GSC abides by the Rehat Maryada

Note: Raagi Darshan has been ex-commnicated from the Sikh Panth for preaching against the edicts from Akal Takht and the SRM.

It is interesting to note that MGC is making an issue in a statement by Niketen on a facebook posting (which has since been removed) when IT PAID NO HEED TO e.g. the following misleading information 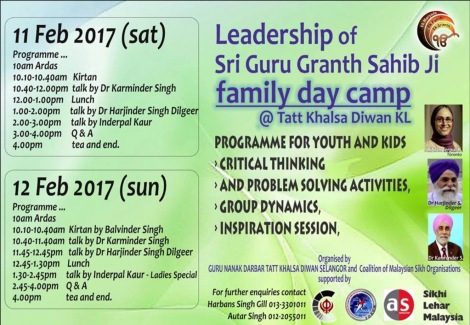 Further, noting that the MGC constitution states that it is to uphold the practice of Sikh Religion in accordance with the established Sikh Practices and Rehat Maryada (this means upholding the edicts of the Takhts and the Sikh Rehat Maryada), MGC did not act when various Sikh Organisation in Malaysia were bringing Preachers (Harjinder Dilgeer see Fig 2 and Inder Ghagga  see Fig 4) who have had a history of preachings not in congruence with the edicts of Akal Takht as well as the SRM and established Sikh Practices.  Why did MGC not act to prevent such activities which are against the objectives of the MGC?

If SGPC is stating that Ek Granth is rooted in Sikhi then it is going against the Akaal Takht Gurmatta (see (B) above).

Since the SRM states that the Takhts are the Highest Religious Authority for the Sikh Panth, therefore SGPC statement is ill conceived and untrue. The statement by SGPC appears to be “anti religious” or “anti Panthic”.

Therefore the statement by MGC in its conclusion

Thus, going by SGPC statement, these divisive elements who have no respect of Darbar Sahib and make false allegations as above, are actually “anti religious” and Panth Dokhi themselves.

is shown to be FALSE based on the analysis above.

H) Divisive elements who have no respect for Darbar Sahib

One final point to clarify is the of MGC statement “these divisive elements who have no respect for Darbar Sahib” most likely refers to the Sangat protest at Gurdwara Sahib Greentown Ipoh and Gurdwara Sahib Seremban.  At both these Gurdwaras a speaker who have had a history of preachings against the edicts of Akal Takht as well as the SRM and established Sikh Practices was in attendance for the lecture.  Also the allegation against Niketen is relevant here.

Akal Takht Mata No 2 dated 27-Nov-2006 sanctions the use of appropriate means to respond to false preachings, based on historical facts and in light of Gurmat.  The English translation of this mata is give below.

In these two Gurdwara instances the response of the Sangat, according to the Akal Takht Mataa, was by means of reciting verses from Gurbani to prevent the speaker from continuing with the lecture (though the protesting Sangat was locked out of the Gurdwara in Seremban because the function was deemed private).  As for the case of Niketen, Niketan must have heard news about Ragi Darshan coming to Malaysia (albeit claimed false by MGC), and acted in line with the Akal Takht Mata to inform the Sangat accordingly.

The allegation by MGC is therefore FALSE.

All the allegations by the MGC have been shown to be false.  Further a tinge of biasness is apparent in that MGC’s statements in that MGC points out faults in some but turns a blind eye to others (who seem to be propagating activities which are not in line with the edicts of Akal Takht and the SRM).

It appears that MGC is condoning those who are acting against the edicts of Akal Takht and SRM.