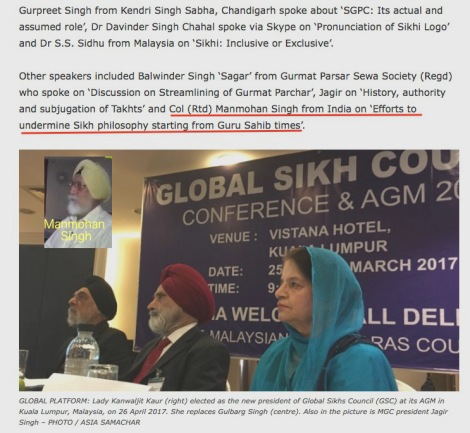 One of the most important philosophical concepts in a religion is the concept of God.  Let us test Manmohan’s belief in this area.

I had the opportunity to have done this exact thing with Manmohan some time back.  See extract of an email from him relating WHAT HE BELIEFS IS THE CONCEPT OF GOD in Gurbani.

Frankly I had a chuckle when I read the above.  This is God Manmohan MADE UP, not what Gurbani teaches us.  What the above means is the Manmohan’s God now is not in control of the universe.  His God made the Universe and cleared out LEAVING the NATURE to fend for the universe.  Where is Manmohans’s God now? Only Manmohan knows?

My comments in blue text to the Figure 2 are shown in Figure 3 below.

Figure 3: My comments (in blue) on extract of email from Manmohan Singh

The concept of God Manmohan subscribes to is close to Deism.  Let us see what Deism is?

The Stanford Encyclopedia of Philosophy (SEP) in the article “Creation and Conservation” states, about deism, that

the continued existence of created things required no activity by God in addition to that of creating them (or their ultimate constituents) in the first place.

Further it adds that

such future activity beyond creation itself was unwanted, since it posed a concern for the success of the scientific attempts to understand cosmos.

In another article “Enlightenment” in the SEP, the following is stated of deism.

Deism is the form of religion most associated with the Enlightenment. According to deism, we can know by the natural light of reason that the universe is created and governed by a supreme intelligence; however, although this supreme being has a plan for creation from the beginning, the being does not interfere with creation; the deist typically rejects miracles and reliance on special revelation as a source of religious doctrine and belief, in favour of the natural light of reason.

I wish to highlight from the the underlined parts above that this is what is being preached by the Anti Dasmee Nindaks (ADNs)(They are those who denigrate the Dasam Granth, and appear to want to make changes to the SGGS Ji and the Sikh Practices from the time of our Gurus).  Their buzzword LOGIC / REASON and CRITICAL THINKING is in line with Deistic Thought.

On this matter, of what deism is, let us see what Gurbani has to say.

O GurSikhs, know that the Bani, the Word of the True Guru, is true, absolutely true.

The Creator Lord Himself causes the Guru to chant it

The Bani of His Word emanated from the Primal Lord. It eradicates all anxiety.

These Gurbani verses equivocally and clearly state that Gurbani is from the Creator and the Gurus were only the tool through which it was brought into this world. Gurbani gives us the WORDS AND PHILOSOPHY FROM THE CREATOR WHO IS THE AUTHOR OF THE  CREATION.

These verses from Gurbani are not in synchrony with the understanding of a deist.

Either Gurbani is wrong OR Manmohan is wrong!

If  what Manmohan said is true then how can Gurbani state the the Banee was received by our Gurus from God?  Note that Manmohan’s God made the universe and cleared out and will not interfere with the creation.  But our Guru Ji’s state they received the Banee from God billions of years later! (note that the Universe was created about 13-15 billion years ago).

Who would you believe? Our Gurus or Manmohan?

I will NOT believe Manmohan.  The mere fact that our Guru Jis’ stated that they received the Banee from God means God is still in control.  Hence we conclude that GURBANI DOES NOT SUBSCRIBE TO DEISM.

Gurbani does NOT subscribe to DEISM.  The Manmohan created God is not what our Gurbani preaches.  These are the type of deviant teaching, hinged on logic/reason and critical thinking, MGC subscribes to.  That is why they bring lecturers with such anti-Gurmat thoughts for their Seminar and Conference.

We will extend the above analysis further in future articles 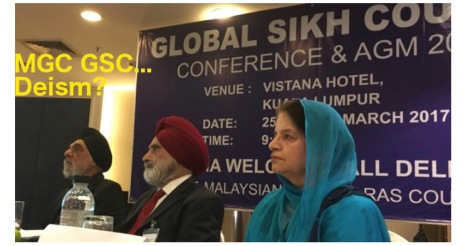