I was browsing the FB pages and came across a classic example of a DEIST process of DESTRUCTION of existing practices.

First let us recall the key points about the practices of a Deist with a picture in Figure 1.  Take note of the part boxed in RED. This is what we will be looking at.

Figure 1: The main concepts in Deism 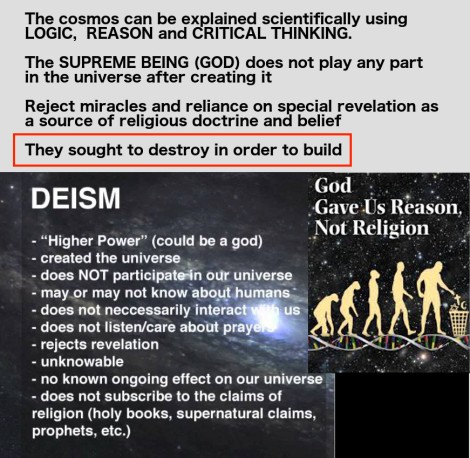 Wajinder is trying to create issues and controversy by his post.  He questions and raises doubts on the practices we have been following since the time of our forefathers and our Gurus.

We will list Wajinder’s claims and then respond to his claims and show that he is IGNORANT of what our Gurus taught us as well as the Sikh Rehat Maryada. 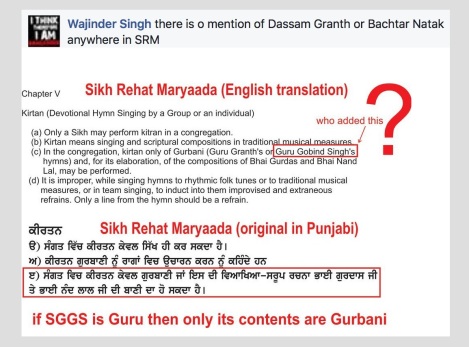 There are a number of main issues he is creating.

He adds further claims shown in the picture in Figure 3.

Figure 3: Wajinder – Those who are NOT SIKHS 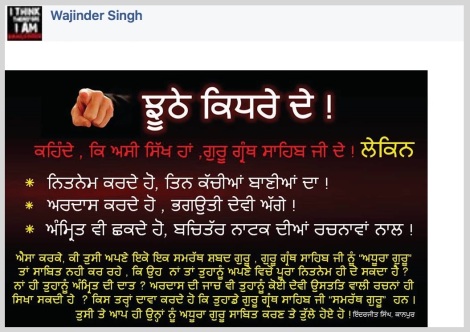 Wajinder through Figure 3 essentially states that those who

are NOT SIKHS of Guru Granth Sahib.

The reason he gives is because the so called NON SIKHS according to his definition consider that the SGGS is incomplete because they think that SGGS cannot provide for the above three dot points.

Wajinder’s FIVE claims are TOTALLY IN ALIGNMENT WITH the Sikh Panth ex-communicated KALA AFGHANA and RAGI DARSHAN’s ideology and practices.

Solely on this basis there is every reason to reject his claims but however we will show his IGNORANCE of the teachings of our Gurus and the Sikh Rehat Maryada.

The English translation was prepared in 1994 well before the Kala Afghana-Darshan Singh Deist Ideology came into being and started meddling with Sikhi, Gurbani etc. See the extract from the preface shown in Figure 4.  This extract is from the English translation of the Punjabi/Gurmukhi SRM prepared by the SGPC under the auspices of the Akal Takhat.

Figure 4: Extract from English translation of the SRM 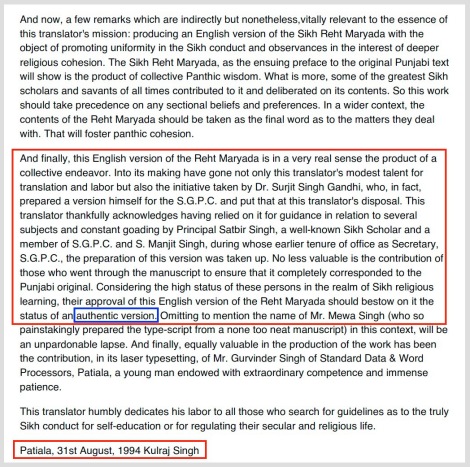 And the article on Kirtan from in this English translation done in 1994 is shown in Figure 5.

The English translation is thus an authentic translation of the original Punjabi/Gurkukhi approved and accepted on 1-Oct-1932.  Therefore without doubt Guru Gobind Singh Ji’s hymns can be sung/ recited according to the SRM as prescribed in Chapter V Article VI Kirtan.

The recommendation is that Wajinder should read and understand the English as well as Punjabi/Gurmukhi version.  There is no question as to the inclusion of all the TEN GURUS (and that includes the writings of Guru Gobind Singh Ji).

Note that the Kala Afghana-Darshan-Deist ideology has falsely stated that Guru Gobind Singh Ji’s writings are not Gurbani. This is CLASSIC DEIST methodology – destroy everything (question Jap, question Naam, question Akhad Paths, question our “Tiohars” … the list goes on) what is now and then propagate the Kala Afghana-Deist LIES.

On this matter, Bhai Kahn Singh Nabha in the Mahan Kosh explicitly states that the Gurbani is the writings of all the Ten Gurus which means Dasam Granth is Gurbani.  See Figure 6.

This is substantiated further both in SGGS Ji and Dasam Granth, which state that the writings are from God.  See two quotes (one from SGGS Ji and one from Dasam Granth) below.

Whatever my Lord said to me, I say the same in the world.

Without doubt our Gurus explicitly stated that Banee in the SGGS Ji and Dasam Granth is from GOD.

Therefore anyone who questions that any writing from Dasam Granth is not Gurbani is committing Blasphemy.

This clearly SHOWS THAT WAJINDER’S knowledge in Gurbani is HIGHLY QUESTIONABLE.

The Banees Jaap and Ten Sawayyas, both Guru Gobind Singh Ji’s compositions in Dasam Granth (see SRM Chapter 3 Article IV (2)(a) extract in Figure 7 below) are cited in SRM.  Is Wajinder questioning the Sikh Rehat Mayada?  Suggest he goes back to the drawing board to remove his IGNORANCE of the SRM.

The text of the Ardas is stipulated in the SRM.  See extract in Figure 7.  It is explicitly clear the words in the Ardas.  Again does Wajinder question the Sikh Rehat Mayada? Ignorance? 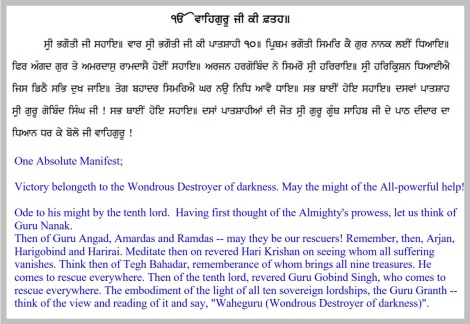 The eyewitness account by Bhai Jaita Ji (who was Baptised with name Bhai Jeevan Singh Ji) states that the 5 Banees were read during the Amrtit ceremony conducted by Guru Gobind Singh Ji in 1699.   The related part from Bhai Jaita’s account is shown below.  Again the ignorance of Wajinder is clearly apparent.

Inspect the initiate for symbols five and let him sit before the five Gursikhs.

Add sugar-coins to water in the bowl and seat all the six heroic Sikhs.

As he stirs he recites the Jap scripture, the other hand he holds over the bowl.

The other four join in, their hands extended over the bowl to consecrate the amrit.

Each of the Five in their turn recites the five scriptures.

With each gulp of the Amrit the Initiate chants Waheguru ki Fateh.

Let all who have gathered for baptisms ingest amrit from the same basin of iron.

Enlightening all about the code of conduct (rahit-kurahit), render the prayer and

Celebrate the baptism with sharing a meal, eaten by all from the same plate.

Considering the response points 3 to 5 does Wajinder think that THOSE WHO PREAPRED the SRM (at least 50) are FOOLS since they included the Banees of Guru Gobind Singh Ji?

From the analysis above, it is clearly apparent that WAJINDER IS EXHIBITING HIS IGNORANCE in

It is foolhardy for Wajinder to put his IGNORANCE ON DISPLAY to the public by making foolish statements about SRM and Gurbani.

HOWEVER ONE THING STANDS OUT.

HE IS USING THE DEIST IDEOLOGY OF DESTRUCTION OF THE EXISTING PRACTICES in the hope that those “unknowing”, reading what he wrote, will fall for his lies.

He thinks that THOSE WHO PREAPRED the SRM are FOOLS.

This strongly shows that he is aligned to the KALA-AFGHANA DEIST IDEOLOGY to which MGC also appears to subscribe.

So the Sangat BEWARE of these KALA-AFGHANA DEIST IDEOLOGISTS who are going around preaching LIES to destroy Gurbani, Sikhi and the Sikh Panth. 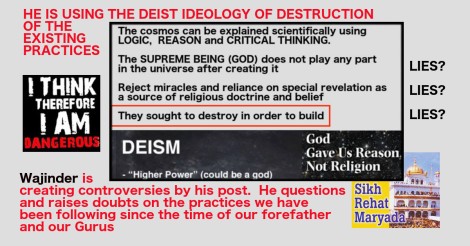