Born to a Christian mother and Muslim father of Iranian descent in Texas, Harsangat Raj Kaur should have been just another kid in the US, dealing with issues that come with growing up in an interracial family. Instead, she has adopted a totally different identity and lifestyle now. Kaur is one of the rarest white Sikhs who has become a Nihang, member of the armed Sikh warrior order famous for its victories in historical wars.

Kaur takes pride in calling herself Persian-Scandinavian Singhni who was born and raised in Texas. Today, she is a mounted archer in true Sikh tradition.  Inspired by a Nihang Sikh, Kaur not only adopted the lifestyle but also completed the ritual baptism of to become a Nihang Singhni. She was baptized by Baba Budda Dal Jathedar Joginder Singh in 2012 during his first visit to the UK. She told TOI that she has been riding horses since she was five. Trained as an archer too, she was fascinated by what she calls “the brotherhood of the horse” and slowly got attracted to the Nihang way of life. She says she finds this lifestyle to be natural, and today, she can easily recite Gurbani. Kaur has also visited Takht Shri Damadama Sahib and tried her hand at Gurmukhi, a Sikh script, by writing the letters in sand.

“My father’s native tongue is Farsi so it’s an advantage for me with Gurmukhi at times,” she says. On how her family reacts when they see her in the flowing robes of a Nihang, she says, “It’s not their favorite image of me.” However, she admits that ever since she embraced Sikhism, there have been several changes in her lifestyle. “My life has changed for the better and I give my thanks to Waheguru each day,” she says.

Kaur is not surprised that Sikhs were attacked in the US. “Growing up, I had to hide the fact of being Persian. I personally don’t like the attention that it (dressed as a Nihang) can bring,” she says.

Kaur aspires to have her own dal (group) of Nihangs in Texas with horses. “I want a place where the Sangat can come and meditate,” she says. 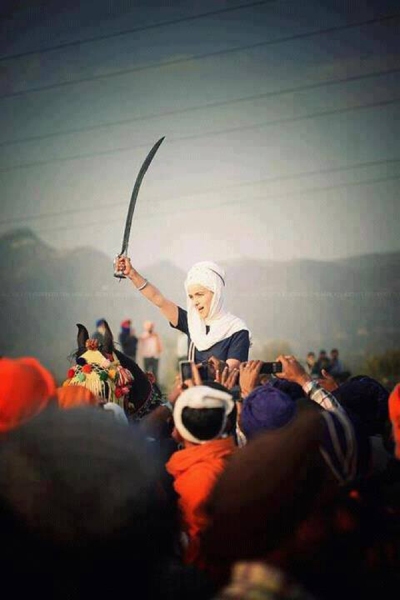