WHY IS MGC CALLING FOR AN EGM NOW?……..IS JAGIR “SHITTING IN HIS DIAPERS” ALREADY?

Well well well, the cat is finally out of the bag!

The rumours that were circulating on the grapevine that an EGM was going to be called by MGC are true after all. So lets look at the MGC’s letter available here for your convenience. The MGC has called for an EGM to be held on 27 May 2017 to get an approval from all Gurdwaras for the following resolution. I have highlighted some disturbing words used by MGC, in red to discuss my views and opinions with the readers.

The MGC EXCO notes the following :

WHEREAS, a group called “Sri Guru Granth Sahib Ji Ke Sewak” had issued letters dated 03-03-2017 and 20-03-2017 to all Gurdwaras in which they requested a meeting to be called and a reply to be given within 14 days, which is tantamount to challenging authority of Gurdwaras and Malaysian Gurdwaras Council.

WHEREAS the Sikh Community and Sanggat who are members of a Gurdwara elect the Gurdwara Parbhandhak  Committee, who then represent the local Sanggat of the area.

SIMILARLY, two representatives from each Gurdwara attend the AGM and elect the MGC leadership every 2 years. Thus, the elected leadership of the MGC represents the Sanggat on a National basis.

The following Resolution is therefore proposed for adoption by the EGM to be held on 27-05-2017.

“The EGM NOTES  with regret, the recent attacks  by groups and individuals against the Malaysian Gurdwaras Council and its leadership  and the EGM therefore unanimously resolves and strongly  urges all Sanggat  and Gurdwaras to remain united against  such challenges  and reject any attempt to divide them”.

MGC Says that the SGGS Ji Ke Sewaks (SGGS JKS) group is “…challenging authority of Gurdwaras and Malaysian Gurdwaras Council.” I am uploading both of SGGS JKS’ letters for the benefit of the readers.

I have searched and searched but I could not find any statement in both the letters that could be considered as a challenge to the authority of the Gurdwaras of MGC. If the President of MGC misuses his position of power vested in him by the Gurdwaras, and if an individual member of the sangat or in the form of a group requests for a dialogue to seek an explanation, does it tantamount to a challenge to authority of Gurdwaras? What have the Gurdwaras got to do with the misuse of power by the President of MGC. This dirty tactic seems like an attempt by Jagir Singh to deflect the heat and pressure that he is facing as a result of his own arrogance and wrongdoings related to the ban imposed on the Sri Dasam Granth in sheer defiance and violation of the Takhat Sahibans, to the gurdwaras.

Is Jagir saying that if anyone questions his wrongful actions and attempted lies to mislead the sangat is challenging the MGC and the Gurdwaras per say?

He also says that ” SIMILARLY, two representatives from each Gurdwara attend the AGM and elect the MGC leadership every 2 years. Thus, the elected leadership of the MGC represents the Sanggat on a National basis”.

The MGC was elected by the Gurdwaras to serve them, not to impose concepts that are against the SRM and directives or advice from the Takhat Sahiban. The Gurdwara committees were in turn elected by the sangat to ensure that the Gurdwaras’  independence is maintained as per MGC’s constitution. It is the sangat who voted everyone into their positions of power including that of Jagir Singh’s. So why can’t the sangat ask for a dialogue with Jagir and why is Jagir making the request seem like a challenge to the Gurdwaras’ authority? Is Jagir saying that the SGGS JKS is not part of the sangat? If they aren’t, then please tell us who the real sangat is? It looks like Jagir’s sangat is Global Sikh Council who he seems to be serving.

The second point I bring to the attention of the Malaysian sangat is the following statement of the proposed resolution by MGC.

Sadh sangat ji, do you notice a similar dirty tactic by Jagir and his bunch of Kala Afghanas to deflect the valid concerns and wrongdoings of Jagir raised by Datuk Sucha Singh Ji ( a learned and religious figure who is also a past President of MGC), on to the Gurdwaras by saying that Datuk Ji is attacking the Gurdwaras. On the contrary the following are some of the statements from the above stated interviews of Datuk ji from Gurvichar.com that are in support of the Gurdwaras.

From Question 3 Part 1 of Interview.

From Question 7 Part 2 of Interview.

The prohibition and the ban on the Dasam Granth bani in the Gurdwaras or anywhere is therefore in defiance of Gurmatta of the AKAAL TAKHAT and the stand and advise of the other Takhats. It is undermining and usurping the authority of the Takhats and is a challenge to their authority.  The Gurdwaras and the Sangat must take serious note of this.

In fact I have failed to find anything in the interviews that are against the Gurdwaras. The fact is Jagir has probably realised that Datuk Ji’s following concerns to defend the independence of the Gurdwaras has awoken the sangat of Malaysia.

1. NOW THE unprecedented decisions relevant to the issues under discussions are:-

a. “The Dasam Granth Bani CANNOT be preached or recited in a Gurdwara, other than the 3 Bani that is Jaap, 10 Sawayyas and Benti Chaupai”.

b. “The Gurdwaras and Sangat MUST embrace the Ek Granth Ek Panth Ek Maryada”.

c. “The MGC should take steps to ensure compliance with the above”.

(hereafter collectively referred to as the decisions)

In the wording they certainly are not advisory in nature.  They are directions or hukams so to speak.  Note the use of the words “CANNOT” and “MUST”.

Who made these unprecedented decisions and how they were made?

……It is apparent from the fore going that the very important and unprecedented decisions are not made by MGC General Body.  They are not even made by MGC Exco.  They are made by a group of people representing some organisations and including some Sikh religious scholars.  The meeting directs MGC to ensure compliance.  The MGC EXCO approves or shall we say rubber stamps the decisions without any amendment and MGC dutifully proceeds to enforce or force the decisions on the Gurdwaras and the Sangat.

For this reason alone the decisions are flawed and cannot be binding on the Gurdwaras and the Sangat.

Where is the integrity and independence of the Gurdwaras and their Council?  Making decisions independently and accepting, approving or rubber stamping the decisions made by others are two different things.

2. I AM INFORMED and I can now reveal that MGC letter dated 12-07-2016 together with the Group Meeting’s decisions were brought to the attention of and given to the Akaal Takhat Jathedar and the other Takhat Sahibhan.  The four Takhat Sahibans have responded and issued their advice and directive on the decisions of The Group and MGC, Takhat Sri Harmandir Sahib Ji Patna Sahib by directive dated 22-07-2016, Takhat Sachhkand Sri Hazur Abchalangar Sahib dated 27-07-2016, Takhat Keshgarh Sahib dated 29-07-2016 and Takhat Sri Damdama Sahib dated 05-08-2016.

The Four Takhats Sahiban have given decisions, directives and advice on the decisions of The Group and MGC.The Gurdwaras and their Council MGC must respect, implement and uphold the directives of the Takhats.  But then MGC questions the very rights of the four Takhats to issue hukamnamas and lays down the limits and perimeters of the right of even Akaal Takhat to issue Hukamnama, Matta, Adesh and opinion (MGC letter of 6th January 2017).

3. THIRD AND lastly Datuk Ji has exposed Jagir’s blatant lie to the sangat, which is only one of the many that Jagir has uttered as given below.

Mr. President, your reaction of surprise and shock over a Panthic call, just shows how far you have drifted from the Panthic principles and objective of MGC.  You are not only misleading but lying that too blatantly and stupidly.  How low can you go? Have you lost your sanity or ability to address issues and defend your decisions and stand rationally?  I have never been a member or involved in MIC all my life and you say 20 years.  I am not a politician and I am not involved with any political party.  All my life I have been involved with Gurbani……

Jagir is “Shitting in his Diapers” Already

Yes that’s most likely what is happening. He realised that he has made a huge blunder and has been exposed right to his “diapers”. So he is calling this meeting to garner support from the Gurdwaras by trying to get them a to pass a resolution, to make Datuk Sucha Singh Ji and SGGS JKS look like the bad guys who are trying to disunite the sangat.

A Clarion Call to the Sangat of Malaysia

I humbly request to the sangat of Malaysia, on behalf of Datuk Ji, SGGS JKS, Dr Harnaak Singh Ji who writes on Gurvichar.com, Dr Anurag Singh Ji and many true sevaks of the Guru Panth, to be aware of Jagir Singh and the rest of his Kala Afghana ideologists committee’s dirty intentions.

Only you the SANGAT CAN SAVE THE MALAYSIAN SIKH PANTH from falling into the hands of Kala Afghanas who are reigning supreme in MGC. If MGC falls, so will the rest of the Gurdwaras. Reject Jagir and his evil cohorts from destroying Sikhi in Malaysia. Vote against his proposed resolution. 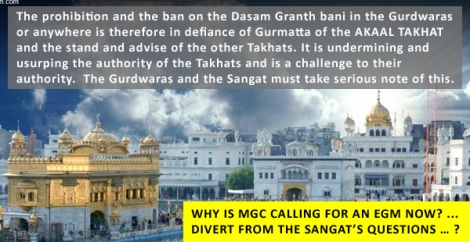