Bhai Davinder Singh – Those who meditate on You, O True Lord – they are very rare.

The result of the MGC EGM was a resounding YES by the SANGAT for the resolution proposed by MGC via letter reference MGC/OF/349/17/(01)EGM2017.

Congratulations to MGC Exco for their success in passing the resolution.

Congratulations also to the Sangat for their choice of supporting the resolution.

It would be interesting to analyse and have an understanding of the impact of the choice by the Sangat and the success of MGC Exco.

We first review and analyse the thinking behind some jubilant groups/individuals who are elated at the success of MGC passing this resolution.  This is addressed in this part 1 of the article.

In part 2 we will analyse the impact of the resolution on the Sangat.

WHO are JUBILANT with the SUCCESS?

First and foremost Global Sikh Council Inc. (they have been noted as PANTH DOKHIS by the Takhats) is very pleased by this success.  The GSC mentioned (see Figure 1) MGC’s success meaning Sangat support of

The use of words “Shabad Guru”, but no statement about LIVING GURU.

Also the Global Sikh Council Inc. states that the 5 Banees for Amrit Sanchar are Jap, Jaap, 10 Savaeyay, Chaupai and Anand Sahib (first five Paurdi and last Paurdi i.e. only 6 Paurdis).  Is this also the stand of MGC?

WHAT PANTH PARVANIK MARYADA ARE THEY TALKING ABOUT? PROBABALY A DISTORTED VERSION WHICH THEY HAVE UNILATERALLY PREPARED! 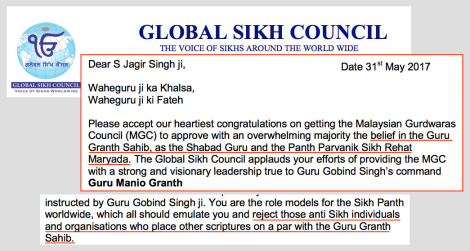 Then we have Karminder Singh (the Head Parcharak of MGC) who states that SSGGS and SRM are the foremost winners.  I have not come across the term SSGGS but my guess is it is SOLE SRI GURU GRANTH SAHIB.  Karminder essentially says that this win means (refer Figure 2)

The use of words “GURU MANIO GRANTH”, but no statement about LIVING GURU.  He conveniently forgets that this continues with GURU GRANTH JI MANIO PARGAT GURAN KI DEH.

The news (apparently received via email) posted in Kotakpura by Gurinder Singh (see Figure 3). See full article on link A 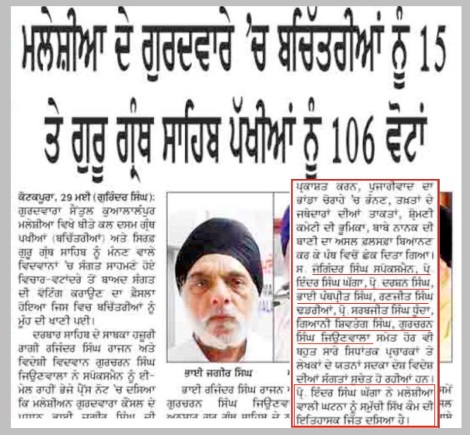 Inder Singh Ghagga (see red box in Figure 3) congratulated Jagir and states it is a historic win for the Sikh Panth.  Inder Ghagga is elated by the MGC win.

Note: A number of them have been mentioned by Akaal Takhat Sandesh 306/3410 dated 21-Oct-2006 (see Link B) which advises Sikh Sangat all over the world not to support these speakers due to their confusing and divisive anti-Gurmat views and association with excommunicated Gurbaksh Singh Kala Afghana.  These people are also known to be against Dasam Granth,

Is MGC also linked up with this people?

It is noted that it was also reported in the article, that in response to Amarjit Singh’s statement “that A Sikh is one who has faith in the Sikh Rehat Maryada, The Banee of 10 Gurus and the Amrit of Khande Kee Pahul”, Jagir replied that “there is only Banee of 6 Gurus in the SGGS Ji”.  This is interesting in the sense that such detail of the discussions would only have been provided to the article writer (or his source) most likely by MGC or its representative.  This appears to give a VERY STRONG INDICATION OF THE LINK BETWEEN MGC and the ANTI-GURMAT NAMES mentioned in the article.

6. Summary of the analysis of the group/individual statements

Summary of the analysis, of what the success means by the SANGAT’s support for MGC, from the statements by the groups/individuals above are listed below.  Therefore the SANGAT/MGC’s supports, believes, accepts and abides by the following

Other points to note from the above are

Note: ** Lord Singh one of the prominent members of GSC stated that the “LIVING GURU” is a metaphor. 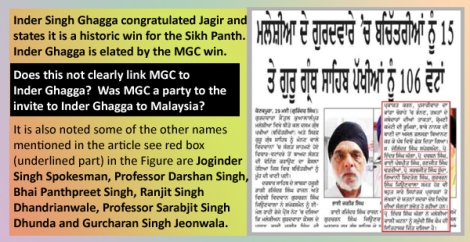