We have read the previous post on FAKE Professors. It is important to appreciate the use of title Professor because there are many FAKE’s around who FALSELY use the TITLE in front of their names to give an impression of expertise.  Dr Harbhajan Singh explains further on this matter.

Dr Harbhajan Singh says that there is a system of ranking in Universities (ranking is the employment position in the Academic field).

He relates an experience in the Department where he is the Director.  There was a person who falsely declared qualifications.  He was dismissed from the post and lost all the benefits.

It is wrong to declare or use or support FALSE qualifications.  This actually is DISRESPECT for KNOWLEDGE (if this is done in Gurmat then it is disrespect of GURBANI as well as our GURUs).

There is a process of earning PROFESSORSHIP.  First one must have the necessary qualifications (a PhD is generally the minimum).  Then there is a process with the steps, LECTURER, READER AND THEN PROFESSOR.  This process takes many years and is merit based.

If someone not having the right qualifications calls oneself a Professor (or others even if others call this person Professor) is disrespect for knowledge.  The can be no bigger disrespect of knowledge (Gyan).

If a person who has a FAKE qualifications or FAKE title, it is not worthwhile or of value listening to the teaching of such a person.  How can such a FAKE person tell the TRUTH because that person is on a FALSEHOOD platform – FAKE qualification/title.  One cannot expect the TRUTH from such people.

Actually the governments should charge these people for using FAKE titles (imagine what will happen if a person who is not a policeman is caught acting as a policeman).

The important message is that THE TEACHINGS OR ADVISE OF FAKE PROFESSORS IS FAKE.

IT IS ATROCIOUS that one needs to declare ONESELF as one that ONE IS NOT.  Such “FAKEDOM” and FALSEHOOD points to an ULTERIOR MOTIVE or an AGENDA and the need to appear knowledgeable in the field being presented.

On this point it is surprising to note that Autar Singh is declared a PROFESSOR as per the FLYER for the SEMINAR ON EDUCATIONAL EMPOWERMENT OF YOUTH at Chinta Sayang Resort, Sungei Petani organised by MGC on 24-06-2017 where he is speaking on Youth Empowerment. (SEE BELOW)

Is this a mistake? Autar Singh as far as sources reveal is not a PROFESSOR.  His credentials listed in LINKEDIN are Senior Lecturer at MARA University of Technology. Further, acknowledgement in a book written in 2014 does not list him as Professor.

Is it MGC, under whose unmbrella this flyer appears to be, who is declaring that Autar is a Professor?

Autar was quick to acknowledge and share issues with others e.g. when the error by Gurvichar regarding Dr Anurag Singh’s status in the Itihas Board?

What about him now?

Further it is noted that Jagir of MGC was also quick to jump on this bandwagon slandering Dr Anurag Singh and Gurvichar.  Jagir of MGC painted himself as very saintly in this slander!

WHY, NOW, DID MGC NOT POINT OUT THIS FALSE DECLARATION ON AN EVENT SPONSORED BY MGC ITSELF?  Where is the “saintliness gone to?

Further Autar was the very person who was trying to pass a BIBI xxxx as DR xxxx in February this year.  He was not happy when this was pointed out on his FB timeline. Also additionally he has been directly or indirectly a party to or involvement with those who profess using FALSE TITLES.  The Sangat knows who these people are.

Isn’t this “FAKE credentials paranoia” inbuilt into the psyche.

We should question this “FAKEDOM” and FALSEHOOD and the purpose behind using FALSE CREDENTIALS.

THE TEACHINGS OR ADVISE OF FAKE PROFESSORS IS FAKE.

We should not leave acquiring our spiritual knowledge in the hands of such FAKE people. 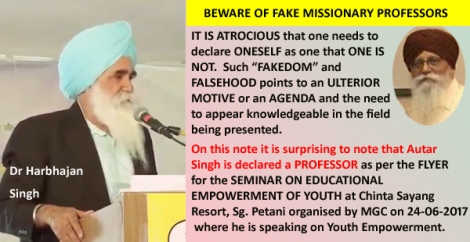