We continue with the analysis of the Presentation by Autar Singh at the MGC EGM.

As in previous parts, Autar’s presentation has been split into spoken parts and each part analysed.  What he says is in summarised in black text and the comments in brown/red text.  Please refer to the video slides which relate to the text below.

In this part we address the Autar’s use of the word “COMPROMISE” in relation to whether the SRM bans Guru Gobind Singh Ji’s compositions which are included in the Dasam Granth .

UNDERSTANDING THE COMPROMISE CREATED BY AUTAR, MGC AND COHORTS

If you cannot follow that compromise.  You want to discuss and compromise.  That won’t work. Because today our egos are very powerful. Very strong.  Accept this compromise for the time.  (Essentially what Autar is stating is that everybody has to accept what MGC and cohorts have decided without any further discussion.)

We have seen how Autar, MGC and cohorts have created a controversy by BANNING the Banee from Dasam Granth using very childish antics.

He is now saying that everybody should accept the compromise, created by their BAN of the Banee in Dasam Granth.

We remind Autar that the SRM is not a compromise but a common base and SRM does not BAN reciting Banee from the Dasam Granth.

Recall, it is Autar, MGC and cohorts who have created contentious issues and therefore the COMPROMISE situation.

It is extremely important to understand how this COMPROMISE situation was created by Autar, MGC and cohorts with the SRM which has been a COMMON BASE all along until mid-2019.

Why is it important?  Because of the subtle manner this has been done.  We will look at his now.

We will delve further into understanding COMMON BASE and COMPROMISE with a simple example using food.  This will help us understand this properly.

Say in a family the forefathers had decided to be vegetarian and only eat the following foods, fruits, vegetables, eggs, cereals, lentils, nuts, animal products (milk, yogurt etc).

Everybody was happily eating thing food.  This is what we term the COMMON BASE situation or practice.

There were no problems and if someone did not want to consume eggs and/or milk products when they chose not to, they did not consume them.

Everybody was happy with the COMMON BASE and remained UNITED on the matter of food consumption.  This went on up to mid-2016.

That is when one of the members of the family, through external influence, decided that the family should not eat eggs and animal products like milk cheese etc.

This is not a problem as long as this person alone does not consume these foods.

However, if this person forces the rest of the family to also not consume these foods (i.e. passing a fatwa banning these foods), then this person has created a contentious issue.

And this becomes COMPROMISE situation for the rest of the family.

Some members may not be happy giving up eggs and milk products but will be forced to and this THREATENS the FAMILY UNITY.

So we can clearly see the parallel with Autar, MGC and cohorts banning Guru Gobind Singh Ji’s Banee.

Their Kala Afghana/Ragi Darshan Group leading stalwarts are propagating the same line.  They are questioning the 5 Banees recited during the Amrit ceremony harping on Sawaeeyay, Chaupai and even Jaap Sahib.

They say these have been framed or forced upon us (words used by them  ਸਾਡੇ ਤੇ  ਮੜਿਆ ਗਿਆ,  ਸਾਡੇ ਤੇ ਥੋਪਿਆ).

THIS IS CLEARLY an ATTACK on the SRM by creating contentions and compromise situation.  The same thing Autar is doing.

They say people are Egoistic!

EVERYBODY should accept the COMMON BASE OF THE SRM

NOBODY should accept the COMPROMISE SITUATION created by Autar, MGC and cohorts. 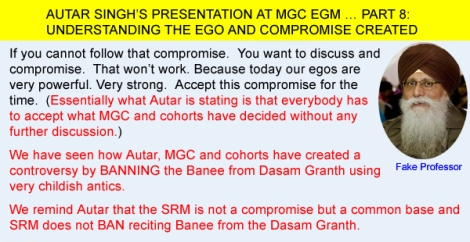