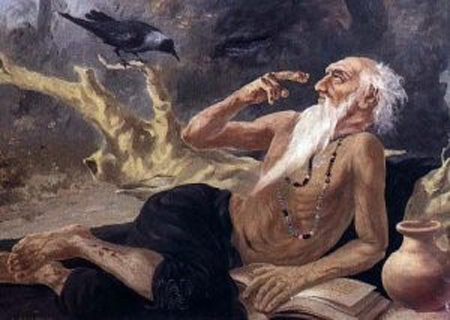 There are 134 hymns of Sheik Farid incorporated in the Guru Granth Sahib. Many Sikh scholars ascribe them to Farid Shakarganj (1173 – 1265AD or 569-664 AH) of Pak Pattan, a disciple of the Sufi Qutbuddin Bakhtiyar Kaki. The tenth in succession to his post was Sheikh Brahm (Ibrahim), also known as “Farid Sani” or “Farid the 2nd”, and it is this Farid who Guru Nanak Dev met on two occasions.

Max Arthur Macauliffe who has been described as a ‘Matchless Scholar of Sikh Lore’ states that hymns ascribed to Farid are compositions by the latter Farid, whereas others have ascribed them to Farid Shakarganj. 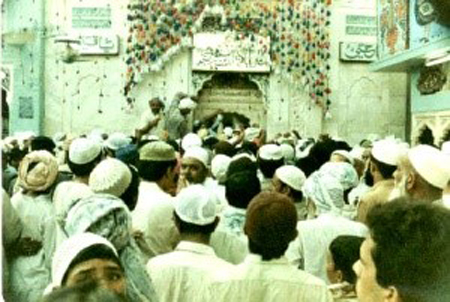 Devotees going through the doorway to the tomb of Farid Shakar Ganj. Photograph : Carl Ernst, 1986

At birth his parents named him Farid-ud-Din Masaud, but he is mostly revered as Baba Farid of Pak Pattan. When Farid was a few years old his mother taught him his prayers. The boy asked what was gained by his prayers. His mother replied ‘sugar’. She used to hide some sugar crystals under his prayer-carpet, and, when he had finished his prayers, she would draw it forth and give it to Farid as a reward for his devotion.

On one occasion, when his mother was absent, he prayed a great deal, and, it is said, he found a correspondingly greater supply of sugar under his carpet. Pleased with the size of his ‘reward’ he ate some himself and shared the the rest with his playfellows. He related the circumstance to his mother on her return and as she had forgot to place his usual reward under his prayer mat she realized it was a miraculous gift from God, so she gave him the surname Shakar Ganj, meaning a “treasury of sugar”.