Before the Q&A session even started, Sarbjit Dhunda indicated that he was not comfortable having this discussion video recorded and asked for any video recording equipment to be turned off. There were about 20-25 individuals present, including keys members of various Gurdwara committees, during this discussion that lasted a little more than an hour.

PANTHIC.ORG – You often state that you follow the Sikh Rehat Maryada, in fact you reference the Sikh Rehat Maryada every time you are questioned about Nitnem. As we all know three of the five Nitnem/Amrit-Sanchar Banees are not from Sri Guru Granth Sahib Ji, can you elaborate what is the origin of this three Banees that the Sikh Panth recited daily?

PANTHIC.ORG – The question we have posed before you is simple, if these Banees are not in Sri Guru Granth Sahib Ji, where are they from? Who was the author of these three Banees? Can you please answer these simple queries?

SARBJEET DHUNDA was unwilling to answer the query regarding the authorship of those Banees and declined to elaborate any further.

Do you also agree with Ghagga, as you are unwilling to share your thoughts about the origin of these Banees? Are they Guru Gobind Singh Sahib Ji’s Rachna or not?

SARBJEET DHUNDA was unwilling to comment on the origins of Sri Jaap Sahib, Twaparsaad Swaiyay, Chaupai Sahib, and instead questioned us if we had any proof of their origin.

Several GurSikhs at that time stood up and stated yes, we have proof and we have faith that these are Dasam Patshah Ji’s Banees as they are included in the oldest Saroops of Sri Dasam Granth Sahib from Bhai Mani Singh Ji and Baba Deep Singh Ji’s time, and these Banees begin with the prefix of “ਸ਼੍ਰੀ ਮੁਖਵਾਕ ਪਾਤਿਸ਼ਾਹੀ ੧੦”, so there should be no doubt about their origins.

The representative was reminded that Dhunda failed to answer any of the questions posed to him in a candid manner, and:

Did NOT take responsibility for purposely associating with anti-Panthic individuals who were ex-communicated from the Sikh Panth. 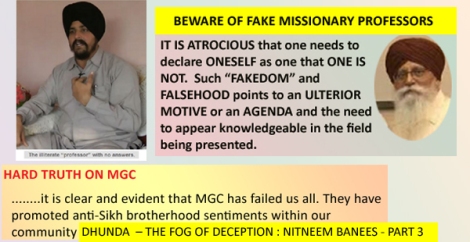