I had a chuckle when I saw a post “Logic and Sikhi – Part 1”, that seems to be a RECYCLED post, by Asia Samachar (AS) on 24-09-2017 (I recall that HB Singh of AS gave me a hard time on my first, which was also the last article on AS, rejected my proposal for further contribution to AS, tried to smear me via his post on 12-Mar-2017 and I believe even tried to call me to intimidate me.  Thank you, Gurvichar, for giving me an opportunity to share my thoughts and the TRUTH with the Sangat.   Thank you, Sangat Ji, for reading my articles.).

I am compelled to ELUCIDATE to the Sangat and warn them of the DEVIANT, MISLEADING and FALSE statements the author KARMINDER is making.

Note: Karminder is the head of the Dharam Prachar Committee of MGC and is well supported by Asia Samachar.  It is believed he operates on a number of FAKE IDs on facebook.  Suspected ones are KVLKaur, Lota Kaur Gill, and who knows what else.  He is one of the Kala Afghana Brigade actively preaching deviant distortion of Sikhi. Another FB community page they have opened is “Malalysian Sikh Sangat” see Figure 1, recently set up as a copy of another FB page of the same name to cause confusion to the Malaysian Sangat.  Keep away from these deviant preachers.  Besides this you will find deviant preaching also on another FB page and website with name “Sikhi Vichar Forum (SVF)” which is also propagating the Kala Afghana Brigade ideology.  They purport to abide by the Sikh Rehat Maryada whence they actually do not.  They condemn Guru Gobind Singh Ji’s compositions with the most venomous and vulgar language while the SRM DEFINES Guru Gobind Singh Ji’s compositions AS GURBANI.  See Figure 2 where SRM states “… (c) in the congregation, kirtan only of Gurbani (Guru Granth’s or Guru Gobind Singh’s hymns) …”.  How can they claim to abide by the SRM?

I quote from Karminder’s article

In fact, the entire Sri Guru Granth SahibJji – from Ek Oangkar right down to Mundavni – is a long persuasive and a logical discourse

I would say such a statement is a real TALL ORDER.  BUT he is able to make this conclusion based on a few verses he quoted; seems to have PUT HIMSELF in our GURUS SHOES to make such a claim.

Isn’t it a MIRACLE that he can do so, using just a few verses?

Before we proceed to discuss this article let me list the “ACHIEVMENTS?” of Karminder.  The table below summarises these “achievements?” which have all been dealt with at Gurvichar.

Please note that you can skip the table if you are pressed for time.

Table 1: Distortion of Gurbani and Sikh History by Karminder

IS THE WHOLE OF GURU GRANTH SAHIB A LOGICAL DISCOURSE?

Karminder’s ACHIEVEMENTS do not appear to be very convincing for anyone to trust such MISCONSTRUED, LUDICROUS, FALSE, MISLEADING, Anti-Gurmat and Anti-Sikhi claims he makes.

These claims are possibly out of the Kala Afghana Brigade Granth.

Based on this we could safely conclude that the claim, he makes “… the entire Sri Guru Granth SahibJji … is a long persuasive and a logical discourse” is also FALSE.

However  we shall analyse this ludicrous claim anyway.

What is logic and reason?

Logic and reason is based on the decisions of our MIND ਮਨ. The classical definition of logic and reason is REASON: a cause, explanation or justification for a belief or action; LOGIC: reasoning conducted according to strict principles of validity.

Logic and reason, as classically defined, is practically impossible to apply in spirituality because of the subjective nature of actions being classified as good or bad.  One can always justify one’s any action with one’s own level of right or wrong.  This is where Gurmat comes in, and where we acquire this ability to discriminate right or wrong, good or bad based on TRUTH.

Let us delve a little further.   We look at our inner-self antahkaran. The ਮਨ MAN (see Figure 3) in the antahkaran is the source of all our actions through the action organs.

Figure 3:  Functional diagram of relationship between, the All pervading consciousness, ਅੰਤਹਕਰਣ antahkaran and ਇੰਦਰੀਆਂ action and sense organs showing the internal functional blocks in antahkaran

The input to the decision making is from our sense organs.  What GuruJi advised us is that our ਮਨ MAN, influenced by the five evils (through our mind’s instincts and materialism ਮਨਮਤ), executes undesired actions through our action organs and these are a part of MAYA.  GuruJi is saying these actions are not going to lead us on the TRUE path (the path to the All-pervading consciousness) and that we must use discriminative intelligence (ਬਿਬੇਕ ਬੁਧੀ) acquired from Gurbani i.e. Gurmat ਗੁਰਮਤ.  The appropriate actions (in Gurbani ਗੁਮੁਖਿ ਕਰਮ), which we will know through ਬਿਬੇਕ ਬੁਧੀ discriminative intelligence, learned from Gurbani, will help us to move in the right direction.

However it is through meditation simran ਸਿਮਰਨ, which is CONTEMPLATION AND REFLECTION leading to the ALL-PERVADING HIGHER CONSCIOUSNESS, will we have TRUE appreciation and understanding of Gurbani and attain God realisation.

It is VERY IMPORTANT to understand that,

In figure 3 this is reflected as

Contemplate and reflect on this to really see the difference.

So ਬਿਬੇਕ ਬੁਧੀ ‘discriminative intelligence’, as far as TRUTH is concerned, is not entirely LOGIC and REASONING as claimed by Karminder and the Brigade.  It is Gurmat ਗੁਰਮਤ based actions the Gurbani refers to as ਬਿਬੇਕ ਬੁਧੀ.  You cannot apply YOUR own LOGIC and REASON i.e. ਮਨਮਤ to interpret Gurbani the word of God.  We use credible sources including our historical records to understand Gurbani.

Logic and reason can result in EXTREME DISTORTION of Gurbani

There is an overzealous trend by Karminder and the Kala Afghana Brigade to fit the teachings of Gurbani into Science/logic/reason, i.e. ਮਨਮਤ, and in the process distort some of the concepts to meet with what they think is suitable for MODERN times.

Though Gurbani talks about the creation and the universe and our role in it, it is by no means a treatise on cosmos/science. Science and Religion serve two different purposes as Gurbani, as the Encyclopaedia of Sikhism, and Nobel laureate Rabindranath Tagore point out.

This overzealous trend is clearly shown in an article “How do we interpret Gurbani?” by Prof Devinder Chahal, PhD on page 16 of Sikh Bulletin, Volume 18 Number 7 & 8, July-August 2016 available at “http://sikhbulletin.com/Bulletins/ SikhBulletinJulAug2016.pdf” refers.  Devinder Chahal is an associate of Karminder who is also one of the supporters of the Kala Afghana Brigade.

When somebody is living pleasurable and sedentary life, one becomes prone to a number of diseases/troubles/problems. However, those who exert (take pain/trouble) in workouts (structured regime of physical exercise) are resistant to these issues. The workouts become the medicine/remedy to prevent all such diseases/troubles/problems; or (in other words), once a pleasurable and healthy life is achieved through proper workouts, then no such diseases can occur.

Though the translation by the author appears SCIENTIFIC, LOGICAL and with REASONING, it does not give the message of Gurbani, in fact it is misleading, implying that Gurbani is teaching us to exercise.  A book on exercise would provide more details on benefits and outcomes.

This is what will happen if we give a free hand to Karminder and the Kala Afghana Brigade to preach Gurbani based on LOGIC and REASON to the Sangat.

What does Gurbani say?

We will consider only one Shabad to show the falsehood of Karminder.

First of all, the lotuses bloomed in the woods; from them, all the swan-souls came into being.  Know that, through Krishna, the Lord, Har, Har, the dance of creation dances. ||1||

First of all, there was only the Primal Being. From that Primal Being, Maya was produced. All that is, is His. In this Garden of the Lord, we all dance, like water in the pots of the Persian wheel. ||1||Pause||

Women and men both dance. There is no other than the Lord. Don’t dispute this, and don’t doubt this. The Lord says, “This creation and I are one and the same.”||2||

In the third verse of the second stanza of the Shabad the word reason ਤਰਕੁ is used.  Gurbani talks about creation and the goings-on in the creation.  God existed before creation, God created the creation (MAYA) which “dances” according to the tune of God.

It is interesting to note that Namdev states don’t try to reason that God pervades the entire creation.  Shabads are found throughout Gurbani which give this same message.

There you go.  Even Gurbani does not agree with this Fake Self-made Guru.

Gurbani does not agree with this Fake Self-made Guru who says that “the entire Sri Guru Granth Sahib Ji – from Ek Oangkar right down to Mundavni – is a long persuasive and a logical discourse”.

Without Gurbani teaching (Gurmat) we cannot use our logic or reasoning to decide on what is right (good) and what is wrong (bad) as this will be biased by our five evils.  Our Gurus had decided through their own methods what we are to learn through our scriptures and our role is to contemplate and reflect on these teachings and then put them into practice.

Without Gurbani teaching (Gurmat) we cannot use our logic or reasoning to decide on what is right (good) and what is wrong (bad) as this will be biased by our five evils.

Relying on logic and/or reasoning can result in misinterpretation of Gurbani and preaching this to the Sangat will do a disservice to the Sangat as well as cause a divide in the Sangat.

BEWARE OF THIS FAKE SELF-MADE GURU lest your mind’s become MISLEAD by his MISCONSTRUED, LUDICROUS, FALSE, MISLEADING, Anti-Gurmat and Anti-Sikhi claims. 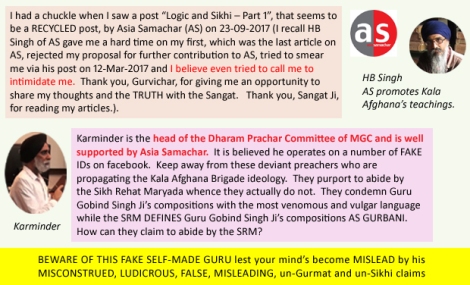 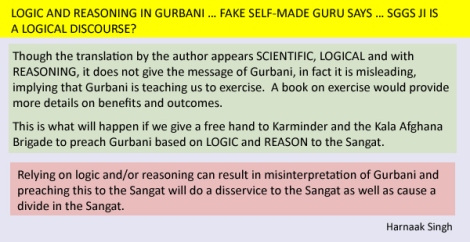