In the previous parts we have discussed the relationship between Faith and RLC (reason, logic and critical thinking) .  Then we showed how Karminder uses RLC to break down long standing Sikh tenets and practices.  This was followed by exposing that MGC and Karminder are a part of the Kala Afghana Brigade.

In the last part (4C) we outlined the main concepts of the Kala Afghana Ideology.  The conclusion was that this ideology is full of anti-Sikhi anti-Gurmat nonsense.  See LINK.

Unfortunately it is seen that a sizeable group of people, especially the more academically educated ones, are being influenced by this nonsense.  Therefore it is worth considering the scenario should the Kala Afghana Ideology is adopted by the Sikh Sangat.

In this part we look at such a scenario as envisaged by Kanwar Ajit Singh in his book Sab Dust Jhakh Mara.

THIS ARTICLE IS A MUST READ EYE-OPENER FOR ALL THE SANGAT OF THE WORLD.

Sorry the article is long BUT enjoy the pictures and you will see how ridiculous the KALA AFGHANA NONSENSE IS.

We present this complete prognosis by Ajit Singh below.  Image extracts Punjabi from his book are first given followed by the English equivalent.  Figures depicting the point using pictures are included between the Punjabi and English versions.  It is noted that Ajit Singh has presented the eventual scenario, which may appear rather extreme and scary.  We tend to agree with him as we believe it is important to view a possible impact, albeit extreme of this NONSENSICAL KALA AFGHANA IDEOLOGY.

Comments, if any, are in green italics (highlighted in other colours).  Figures are included for illustration purposes only.

When a tree is planted, the roots will grow first and then the trunk will develop.  This is followed by branches.  When it is of the right age, flowers and fruits will appear, only then will the taste and effect of the fruit be known.

However, a wise gardener by looking at the seedlings or young tree will be able to tell what kind of tree and fruits it will bear.

This paragraph is metaphorically using a tree to illustrate that with the appropriate knowledge, one can predict the consequence or result of a particular activity or action.

The book by Ajit Singh is an attempt to share this knowledge so we can know what will happen if the Kala Afghana Ideology is adopted.

On the same note Gurvichar has also been exposing the antics of the Kala Afghana Brigade and their ideology.

In the books written by Kala Afghana, the Sikhi tenets, traditions and concepts are highly criticised.  When these are appropriately evaluated, a distinct picture or scenario emerges.  This is the scenario we share with the Sangat in the following.

Based on whatever has been written by Kala Afghana about

it becomes clear what will happen in the future. 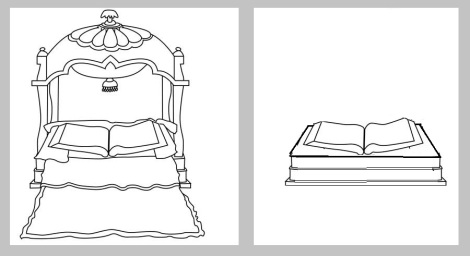 There will be no more chandoa, palki, chaur and ramaalay.  Matha Tekna will be a thing of the past.  SGGS JI (Ek Granth) will be set up on library style tables.  There will be full freedom for anyone to come and read SGGS Ji as they wish.

All the jujube trees from the area surrounding (ਪਰਿਕਰਮਾ) of Amritsar Sarowar (tank, pool) will be cut.  Likewise trees related to other historical Gurdwaras will also be cut.  These will be used for cooking langar. 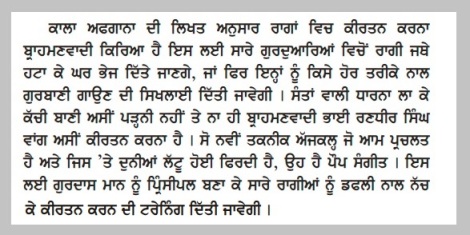 According to the writings of Kala Afghana singing Kirtan in Raag is Brahmanvaad practice.  Therefore the Ragi Jathas from all Gurdwaras will be sent home.  Alternatively they will be taught how to sing Gurbani in a different way.

Kachi banee in dharnaa style sung by the Sants as well as Kirtan of Brahmanism style like that done by Bhai Randhir Singh will be prohibited.

So the new technique common nowadays that the world is infatuated i.e POP style music will be preferred.  In order to do this Ragis will be trained to dance and do kirtan with a tambourine.

Nothing has been stated in SGGS Ji about Khanda Pahul and taking Amrit.  That’s why according to Kala Afghana’s writings this is useless (worthless, nonsensical) and is a Brahmanvaad.  So Amrit ceremony will be banned.  To find an alternative, Comrade Sikh Scholars and Missionary Colleges Organisations will be charged with finding a solution.

According to Kala Afghana Sikhs only need to use “sword of knowledge” (Gian Khadagh – Reason, logic and critical thinking) to understand the religious or moral discourse.  Therefore all the Shastar (arms, weaponry) will be taken out of all the Gurdwaras, buried in a hole in the ground or will be auctioned off.  All Sikhs will be ordered to deposit their arms,  and the “Reason, logic and critical thinking” factory that will be opened by Kala Afghana to give permission which arms can be kept.

Bathing in the sacred pools (Sarovars) according to Kala Afghana and The Missionary Colleges education is Brahmanism.  So the sacred pools (sarovar) will be filled to make Gurdwaras spacious.  Alternatively, to make the Gurdwaras beautiful colourful lights will be installed, with small boats for entertaining the children so they will be attracted to these and start coming to the Gurdwaras.

We only believe in the SGGS Ji.  In the SGGS Ji there is NO mention of Waheguru Ji Ki Fateh words, the Rehat of 5 K’S, jakaaraa (ovation) of Bole Sohn Haal, Nishan Sahib and Kardah Parshad.  All these are useless/worthless and are the root cause of frequent trouble. Therefore all these will be banned.

Figure 7: Destruction of all volumes of Dasam Granth

According to Kala Afghana the whole of Dasam Granth is written by a mischievous Brahmin. Guru Gobind Singh Ji has edicted us to follow Guru Granth Sahib.  Therefore all the Dasam Granth volumes will be collected and destroyed.  If a Sikh reads the Dasam Granth, legal action will be taken against the Sikh. 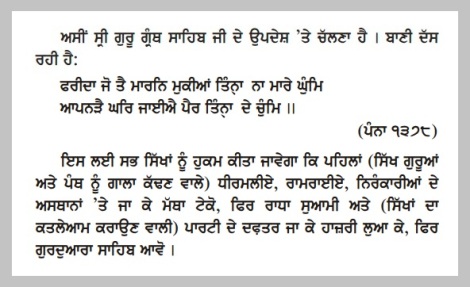 We will follow the instructions of SGGS Ji. Bani is telling us:

Fareed, do not turn around and strike those who strike you with their fists.

Based on this verse Sikhs will be ordered to first pay obeisance to those who slander the Sikh Gurus and the Panth and those responsible for the genocide of the Sikhs and only then come to Gurdwara Sahib.

Note that Kala Afghana Ideology strictly through our actions follows SGGS Ji to the word.  To abide by the verse it is necessary for Sikh to pay obeisance to the enemies. 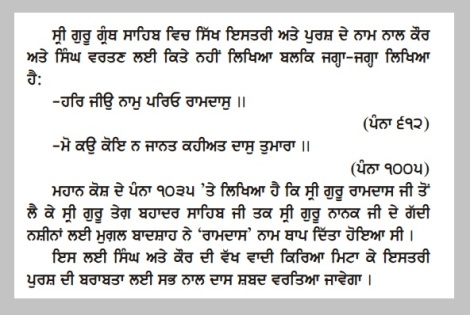 No where in SGGS JI is written that a Sikh woman (wife) and man use Singh and Kaur after their name, on the other hand it is written in many places

No one knows me: I am called your slave.

On page 1035 in Mahan Kosh it is written that the Mughals used the term RamDASS for Sri Guru Ramdas to Sri Guru Teg Bahadhur.

Because of that the use of “Singh” and “Kaur” will be wiped out and for the equality of men and women the word “Daas” will be used instead. 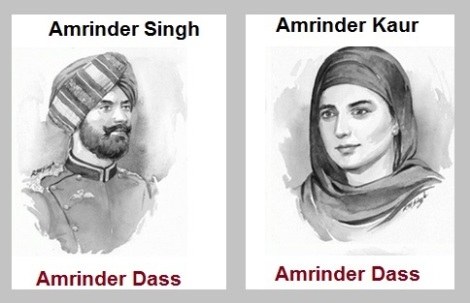 Universality (to the extreme) 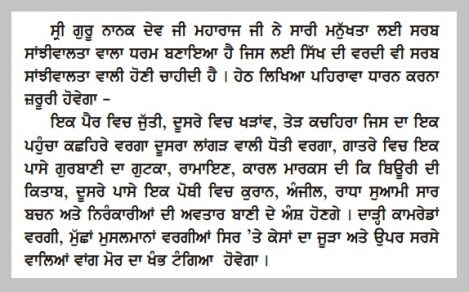 Sri Guru Nanak Dev Ji made a universal religion.  Therefore the Sikh’s uniform should also be universal.  The following dress code is compulsory

The following universal dress code will be compulsory

The useless Miri Piri tenat Nishan Sahib will be removed and replaced by a new Nishan Sahib. Half part will be deep orange and the other half will be mixed red, saffron and black. 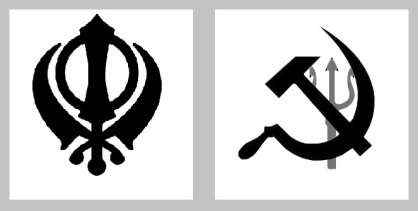 The symbol (emblem) of Nishan Sahib, Khanda/Kirpan), which looks like a Brahamvaad trident will be discarded and a new form will be given. The new symbol will consist of sickle, hammer, with a tinge of the trident.  The underlying meaning or idea is to have the east and west compatibility.

Legal action will be taken against those who

all of which are Brahmanism activities.

Why legal action?  This is because at the present moment the Akaal Takhat that passes religious punishment is practicing Brahamvaad.

This means the courts will remove Akal Takhat as Supreme Body of the Sikh Panth.  It will be replaced by the Governmental legal system i.e. the legal system will regulate religious affairs. 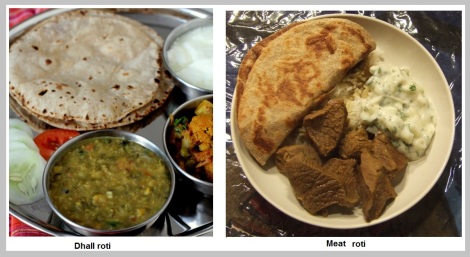 During Gurpurab, all historical (itihasik) Gurdwaras with have to prepare food based on health outcomes.  As a part of this various types of special meat will be cooked and prepared for the Sangat.  This will make Sikhi attractive and Sikhi will spread all over the world.

The Kala Afghana Brigade talk as if now the food is not healthy.  They have their own distorted notion about food and health.

Finally a committee will be formed which will have a serious discussion to remove God’s various names s in SGGS Ji which are Brahamvaadi – Raam, Murari Ghowardhan, Bithal, Keshaw etc, all will be proposed to be removed from Gurbani.

In the same manner all Hindu mythological and Puranic references will be removed from SGGS Ji. 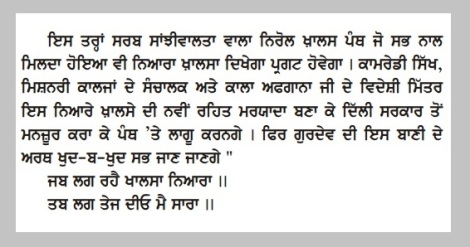 In this manner there will manifest, a universal associated unique panth, which even though similar to everybody, will be distinct. The comrade Sikhs of the Missionary College administration together with the foreign Kala Afghana Stalwarts will prepare a new Rehat Maryada for this distinct unique Panth.  They will get it approved from Delhi Government, and enforce it on the Panth.

So long as Khalsa retains his distinct identity

I will give him my entire radiance and strength.

Note:  To understand this last part it is important to appreciate the basis of the Kala Afghana Ideology.

In the late 1990s Kala Afghana wrote a series of books, Bipran Ki Reet.  These books questioned the very core of Sikhism, i.e. the Sikh tenets and Sikh practices/traditions from the time of our Gurus based on the following verses.

So long as Khalsa retains his distinct identity, I will give him my entire radiance and strength.

When the Khalsa adopts the way of the Brahmin, I will not give the Khalsa my trust and support.

See from where the phrase “Bipran Ki Reet” comes from.  The above verses are from the Sarab Loh Granth.

As long as Khalsa remains true to the tenets and practices taught by the Gurus, Guru will support the Khalsa in every way.  But when the Khalsa adopts the ways of the Brahmins, then Guru will withdraw his support and trust in the Khalsa

and that these verses are from Sarab Loh Granth which is the composition of Guru Gobind Singh.

The scenario based on the implementation Kala Afghana Ideology as perceived has been outlined.  This is a complete makeover of Sikhi.  It will no more bear the resemblance of Sikhi as our Gurus perceived it.

The core of their ideology is from a Granth (Sarab Loh Granth) which they reject!  Can you, Sangat Ji, believe their nonsense.

It is better for the Kala Afghana group to set up their own new religion instead of CORRUPTING THE SIKH FAITH to the extent it will not be recognisable in the form our Gurus and forefathers meant it to be.

Sangat Ji please Beware of these Missionaries and the Kala Afghana Brigade who are hell bent on propagating this ideology and destroying Sikhi. 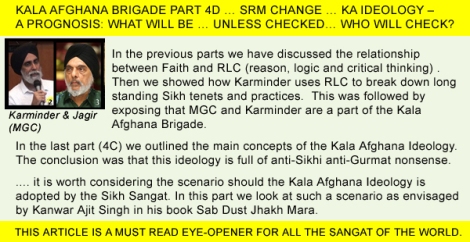