O divine beings, detach yourself from worldly wisdom and immerse yourself in God’s meditation

This point can be easily understood through the example given below.

When the truth-seeker’s attention is involved in the mental thoughtless state of mind contemplation, he experiences:-

– from which he does not like to come out. Satisfied with this, or regarding this tasteless – dry, thoughtless state of mind contemplation – as life’s spiritual destination, he forgets the higher stage of :-

Only with Guru’s Grace and in the company of spiritually elevated souls can one come out of such subtle spiritual doubt-filled fallacious thoughtless state of mind or vacuum. This hidden secret is mentioned by Gurbani thus:

Despite unlimited religious rituals in the world nowadays, mental degradation is on the increase. From this it is clear that our effort towards spirituality is superficial and half-hearted or wrong.

This point is illustrated in Gurbani as follows:

This spiritual secret is considered and recognised only by some rare spiritual soul:-

When such ‘guru-orientated persons’ or ‘God’s beloved servants’ discard their deceptive mental acrobatics and ‘why-what how’ and immerse themselves in the word with attention through devoted worship and faith filled with love, then they become eligible to receive the blessings of the Satguru –

To enshrine God’s pure ‘love’ in the heart, it is essential to have total faith on the Infinite Lord.

For example a baby, in its innocence has full of devotion in his/her mind for its mother. The baby first learns the word ‘mother’ and has full faith in her. In this stage of childhood innocence, for the child, the mother is his/her

On the other hand the mother too in her motherliness and ‘mother’s-love’ looks after and nurtures the child with undivided love from depths of her heart. The child, dependent on the mother 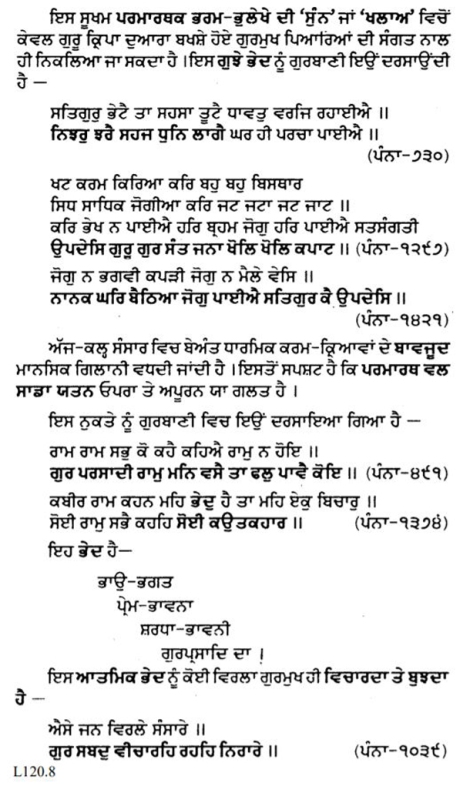 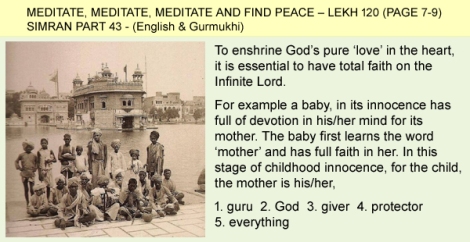