In these series of articles we explore the calendar issue in the Sikh Panth and the need of a calendar.  Hopefully at the end of these articles we will all appreciate the problem is not to do with Hindu or Sikh or Christian or Bikrami etc. but to do with the heavens (constellation, sun, earth and moon).  All the foolishness and stupidity the Nindaks are propagating will vanish.

A calendar is a system of marking or organizing social, religious, commercial or administrative events.  The events can be past i.e. historical or future events.  For the purposes of this article past events are considered as marked events while future events are considered as organized events. Essentially this is timekeeping.  Timekeeping dates back to prehistoric period.

We will not go into history but will refer to some important calendar systems which will help us in this article.  We will also look at planetary mechanics which is important to understand to make our discussion easier as we progress on the topic of calendar.

The Julian calendar was proposed by Julius Ceaser in 46 BC.  It took effect on 1st January 45 BC.  It had a regular year of 365 days divided into 12 months and a leap year was added every 4 years.  The average Julian year was 365.25 days and was supposed to approximate one solar year.  However the solar year (tropical year) which was 365.24219 is shorter but it was not compensated for in the Julian calendar.  As a result the Julian Calendar gains 3 days every 4 centuries which gives approximately 1 day in 128 years.

The problem that arises is that there is misalignment with seasons over time.  This misalignment is observed in that the date of commencement of spring starts to come earlier and earlier over time.   Spring begins with the summer equinox (northern hemisphere) which is generally 21st March.

Before we move on to more calendars let us discuss the moon, earth, sun and the constellation which is very much related to calendars and timekeeping.  We will then understand what equinox means.

Moon, Earth, Sun and the Constellation

Figure 1 shows the earth, sun and the constellation, it is worth discussing Figure 1 as it is very important.  The sun (yellow colour) is shown in the centre.  The earth orbit around the sun is shown in blue. The outer cylinder is the heavens in our galaxy of which the 12 major constellations, Aries, Taurus … Pisces are shown.  The months Chet, Vesakh …. Phagan are also shown together with the English months, March-April, April-May …. February-March, related to the constellations. The numbers (based on northern hemisphere) in the earth’s orbit around the sun are

Notice the white line through the earth in Figure 1.  This line represents the axis through the earth’s North and South poles.  This is reflected in Figure 2.  The earth rotates around this axis and the rotation results in day and night.  It is inclined at 23.5 degrees from its plane of orbit around the sun.  The earth also orbits the sun, this movement round the sun causes the seasons. 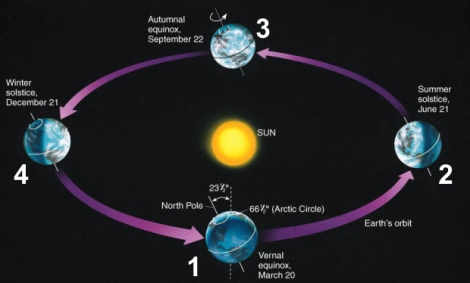 Just like the earth orbits the sun, the moon orbits the earth.  The moon’s rotation is “in synchronous” rotation with the earth.  This means the same side faces the earth always as it progresses through its rotation.  It rotates around its axis once at about the same time it takes to rotate around the earth.  Our interest lies in the phases of the moon.  This is reflected in Figure 3.

The moon orbits the earth.  Figure 3 shows the phases of the moon as seen from the earth.  The numbered phases are as follows:

The leap years were arranged so as to reduce the shift of the seasons.  The rule for correction is

This resulted in the mean year to 365.2425 (closer to the solar year which is approximately 365.24219).  This gives an approximate error (gain) of 1 day in 3030 years, but considering that the constellation and earth are moving, this may be closer to 1 day in 7700 years.  Figure 4 shows how this correction of shift is reflected at the summer solstice date of 21st June.

Also note, in Figure 4, the dashed line subsequent to 1800.  This is what happens if the leap year correction rules (of no leap year every 100 years …) is not applied.    It is like not making a correction on your steering and ending up in a ditch.

Even with the Gregorian calendar notice that in 1750 the solstice occurred at 21-June at about 2:30 am (see Figure 4) but in 2250 on 21-June the solstice occurs just on midnight (Figure 4).  This shows approx. 2.5 hours shift in 400 years.  This will give the shift of approx. 1 day in between 3030 to 7700 years we spoke about earlier.  There will be a rule to apply a leap year in one of the year when it is supposed to be skipped closer to the time.  In this way the seasons calendar timing will be maintained within a day.

Please understand this correction as well as the discussion on the constellation/sun/earth/moon because it is very important as we shall be talking about this in forthcoming articles.  Ask questions if you are not clear.

The months and days per month are the same as the Julian calendar.

We will stop here and continue next with discussion on other calendars in the next post.

Thank you for reading.  Hope you enjoyed the discussion.