The Two Facebook Friends, S.Inder Singh ji and Dr Gurtej Singh, the organisers of Dr Harbhajan Singh’s Lectures in USA spared no pains to defend the malicious propaganda of Dr Harbhajan Singh against Guru Gobind Singh, making him the central character in Charitras .16,21-23 As Defence Lawyers.  While the Learned University Professor could not confront  any facts uploaded against his blasphemous theory of making Guru Gobind Singh a Sakat Guru in search of MANTRAS in violation of Commandments in Guru Granth Sahib, Dasam Granth Sahib, Rehitnamas.

To support Dr Harbhajan Singh’s Misleading propaganda that Nup Kaur, mentioned only once in Three Charitras, was Baptised and she became Sikh, S.Inder Singh ji uploaded a paragraph from Dr Ganda Singh’s Book On Baba Banda Singh Bahadur. One Post demolishing the Bubble Of this theory had already been uploaded yesterday (Post No.5).

In response to this post I uploaded my comments to S.Inder Singh ji, see the screen shot enclosed with this post, to which no answer was given. Now I am uploading the following proofs from my library to substantiate my points in my post with questions raised on Dr Ganda Singh’s compromising researches and unhistorical averments On following counts:

(1)Title Page Of Dr Ganda Singh’s Book On Ahmad Shah Abdali, Which was written under the supervision of Muslim Guides Of Aligarh Muslim University to obtain D.Lit Degree.

(2)Pages from his booklet A Brief Account Of The Sikh People, published in 1971 by DSGMC In Which Guru Tegh Bahadur is shown as political rebel for which he was martyred by cutting his body in four pieces, which were hanged on Four Gates Of The Fort. This booklet was also published in USA.

(3)Two Pages From the Report Of SGPC On Publication Of Hazuri Bir Of Sri Guru Granth Sahib, In Which It was claimed that 546 mistakes prevalent in previously published Birs were removed. Dr Ganda Singh gave a false certificate that these mistakes have been removed. But Bhai Jodh Singh refused to testify this false certificate.

(4)Three Pages From a Book by Dr Ganda Singh HUKAMNAME. One Hukamnama Of Guru Tegh Bahadur is attributed to Guru Gobind Singh. This was not the original research of Dr Ganda Singh.There are two more pages: one of a Hukamnama to Benaras Sangat In Which Sri Dhar is mentioned. On the second page Sri Dhar is mentioned as an important Sikh. Sri Dhar was the name of the Horse Of Guru Tegh Bahadur, presented by Nawab Saif-ud-Din Of Saifabad

(5)During Second World War Dr Ganda Singh wrote series of articles in Khalsa Samachar to Advocate that the Sikh Soldiers should not resist wearing Helmets as it was worn by Baba Deep Singh ji also, Whereas the Quoits worn by Baba Deep Singh(Shahidi Misal) are still preserved at Sri Akal Takhat Sahib and are shown to public. Bhai Randhir Singh condemned these compromising researches of the Learned Historian In his booklet: ”BHARI BUJAN KAU BHARI BHAROSO.” Readers can see detail report from Secret Files Of British Government on my Timeline.

Now enough time had passed and it is high time for both the Defence Lawyers Of Dr Harbhjan Singh Whether they support these compromising researches Of Dr Ganda Singh ji to seek Name, fame, Degrees and Position.

Here Episode Of ANUP KAUR is as mythical as of KHARAG SINGH in Krishnavatar.

01 No reply to these specific questions to S.Inder Singh ji On Dr Ganda Singh’s compromising researches. Proofs On these observations are attached with the post. 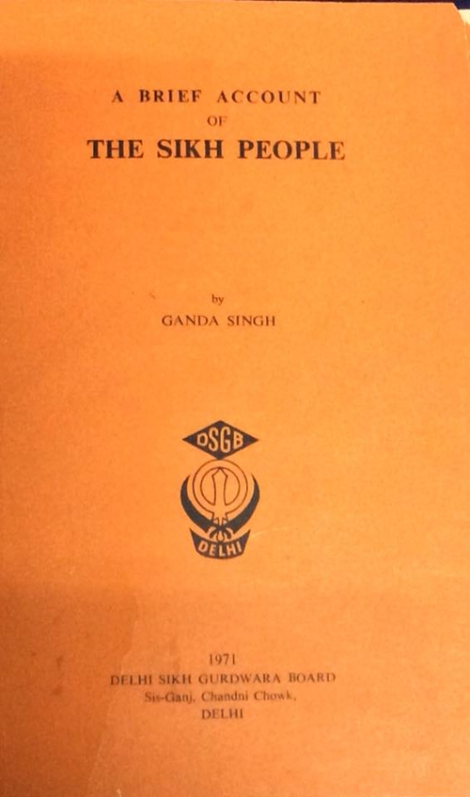 02 A Booklet by Dr Ganda Singh, published in 1971 with false construction of Guru Tegh Bahadur’s Martyrdom. Earlier this Book was published in USA.

03 Guru Tegh Bahadur shown as political rebel against the state by Dr Ganda Singh, for which he was martyred.  S.Kapur Singh demolished this theory in his lecture delivered at Punjabi University Patiala, WHO KILLED GURU TEGH BAHADUR.  Ask Dr Harbhjan Singh all rounder Whether he had seen it. 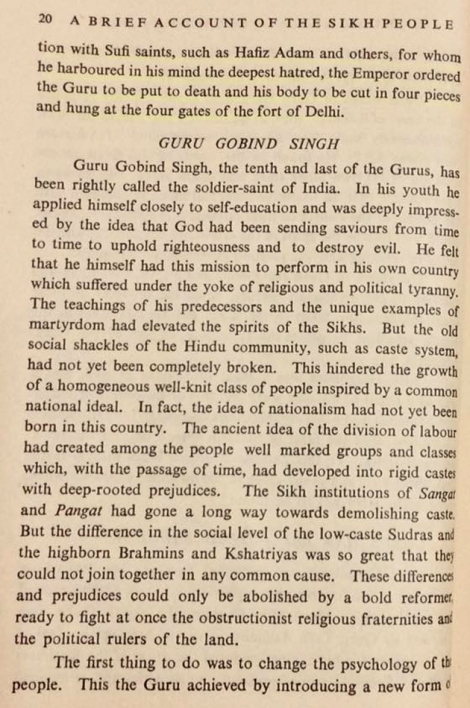 04 Second page of account of Dr Ganda Singh on Martyrdom Of Guru Tegh Bahadur. S.Inder Singh ji, Dr Gurtej Singh ji and Dr Harbhajan Singh ji now tell the public on the walls of which fort Four Pieces Of Guru Tegh Bahadur we’re hanged. Should we stop going to Gurdwara Rakabganj and Sis Ganj. Should we forget the name of Bhai Jaita. Where Four New Gurdwaras should be Built as per this new theory of Dr Ganda Singh. 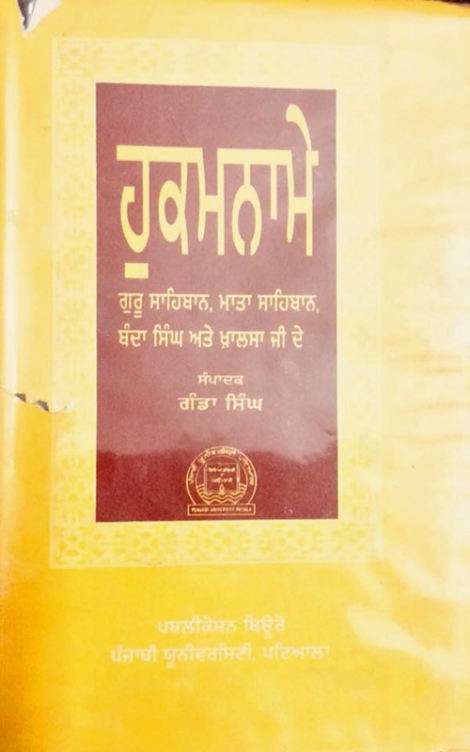 05 Another book by Dr Ganda Singh referred in my post.

09 Dr Ganda Singh’s D.Lit thesis in which name of Baba Deep Singh is omitted to please the Muslim Guides and obtain degree. 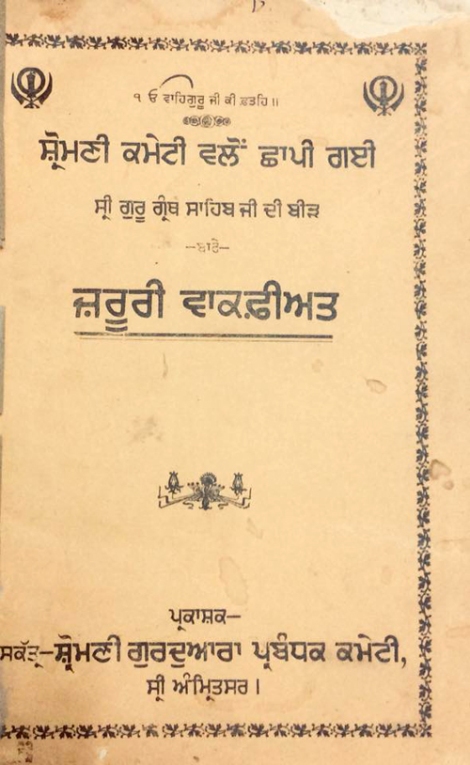 10 SGPC’S Report On publication of Hazuri Bir Of Guru Granth Sahib, claiming that 546 earlier mistakes of printed version were removed. 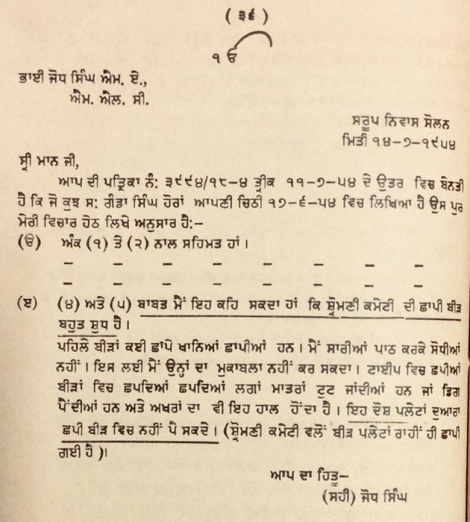 12.  Bhai Jodh Singh refused to certify this false certificate of Dr Ganda Singh in 1954.
I have proceeding of meetings of Sant Samaj and Nihang Singh Jathebandis during this period flashing these false certificate.