SOHJI alters GURMANTAR, changes DOHRA, terms GURU GRANTH SAHIB a BOOK and selectively rejects Akaal Takhat HUKUMNAMAS.  This is an ALTERATION and DISTORTION of the practice of the Sikhs since our Gurus times. 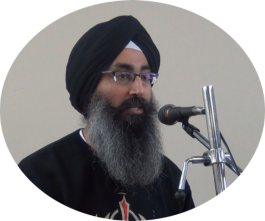 An article at SCRIBD see Figure 1 (see LINK for article) by the Sangat have highlighted some concerns with the Sojhi syllabus.

The SCRIBD “CONCERNS WITH SOJHI” article exposes the belief, concepts, philosophy and thinking, essentially the ideology, of the designers/developers of SOJHI in relation to Gurmat and Sikhi tenets (doctrine).

We have analysed this document and presented the result in three articles at Gurvichar (LINK, LINK, LINK)

We can, from these three articles, sum the ideology up as follows:

In this post we will look at Sikhri’s Sojhi Review Report “PART B. REPORT OF THE CURRICULUM REVIEW COMMITTEE” available at Sikhri LINK.

This committee appears to be set up because of the Sangat’s concerns expressed to the article reflected Figure 1.

We will critically analyse this report and present our views.

The Introduction of the Report

The main points in the introduction are

The committee decided it will address the following issues

1. Dohra recited after Ardas (Section B1 of report)

The committee stated as follows.

is as historically accurate and as authentic in origin as

The meaning and application to Sikh tradition are apparently equally satisfied by either dohera.

The report “Concerns with Sojhi” (Figure 1) has explicitly pointed out that Sojhi’s reason for the replace is the phrase “ਆਤਮਾ ਗ੍ਰੰਥ ਵਿਚ, ਸ਼ਰੀਰ ਪੰਥ ਵਿਚ Aatma Granth Vich, Shreer Panth Vich” without quoting the source.

It appears that the committee, by making this claim, imply that the Guru Panth is also the “physical form of the Guru ਪਰਗਟ ਗੁਰਾਂ ਕੀ ਦੇਹ”.

BUT they forget that Guru Gobind Singh Ji edicted that “Guru Granth Sahib” is the “physical form of the Guru ਪਰਗਟ ਗੁਰਾਂ ਕੀ ਦੇਹ”.  He did not nominate any other.  So without any doubt Guru Granth Sahib is the only LIVING GURU in the Sikh Faith and this is a core concept of the faith.

Of course, Guru Gobind Singh Ji did say the if you need me then I will reside in the Guru Panth.  This is in the form of the Panj Piaray.  The purpose of this is for panthic decision making; NOT to be the PHYSICAL FORM OF THE GURU which only can be Guru Granth Sahib Ji.

Based on this comment alone it appears that the decision of the committee will have a degree of bias.

The committee decided to maintain the status quo by stating “strongly recommend that the Sojhi curriculum at this time reflect the existing tradition that is followed around the world”.

The phase “at this time” is the giveaway.

This clearly shows the use of “Guru Granth Ji maneo” is a compromise and temporary recommendation.

There are other recommendations like Sojhi should sought the input of all stakeholders and that it be sensitive to the historical significance of such modifications.

2. Modification of the Ardas (Section B2.2 of report)

Sojhi deleted the “reference to Nankana Sahib” in the Ardaas.  The committee recommended that the Sojhi Ardaas be exactly as the Sikh Rehat Maryada.

However, the committee feels that Sojhi decision to remove Nankana Sahib is “logically unassailable” meaning that it is not logically wrong for Sojhi to make this change.  The committee also questions why other historical gurdwaras in Pakistan are not mentioned in the Ardaas.

Again, the committee shows its bias towards Sojhi in not condemning Sojhi for making a change to the recommendation of the Sikh Rehat Maryada AND ADDITIONALLY itself raising questions about the Ardaas.

3. Distortion of the concept of LIVING GURU in the poem by Jeevanjot Kaur (Section B2.1 of report)

The issue is that the poem refers to Guru Granth Sahib as a BOOK.  The committee feels that the reference to Guru Granth as a book is not IRREVERENT or SACRILEGIOUS and hence is acceptable and did not propose any change to Sojhi.

The concept of LIVING GURU is a core concept of the Sikh Faith as pointed out in “1.” above.

We add further, that Harinder of Sikhri, one of the originators of Sojhi, says in a video (see LINK), that Guru Granth Sahib is NOT A BOOK, it is dwelling place of Vaheguru.  Thought he fell short of saying it is a LIVING GURU; from his words this implication of LIVING GURU is clear.

This is the paradox.  On one hand the syllabus he was involved in preparing allows reference to Guru Granth Sahib as a BOOK; on the other hand, in a lecture to the Sangat (see LINK) he says Guru Granth is not a BOOK.

Is he playing second fiddle to some other agenda?  Is he another of those who just speak to satisfy the Sangat in the interest of a bigger agenda?  Does he subscribe to basic Sikh principles or does he just change his principles to suit the situation/agenda?  Is he also one of those FLIP-FLOP parcharaks?

It is quite clear that the committee does not accept one of the core concepts of Sikhi that is Guru Granth Sahib is the LIVING GURU of the Sikhs.

How can they consider themselves eligible to judge on matters that they do not believe in?

This is outright bias on their judgement.

4.  Linguistic issues related to transcription of Punjabi to English (report Sections B2.3, B2.3A and B2.3B)

Substantial effort appears to be spent on this non Sikhi and non Gurmat issue arguing about whether Vaheguru should be using “V” or “W” and Pateh, Fatih or Fateh.

5. What is not addressed in the report

The committee did not address the very important issues

A high degree of bias comes out starkly in the committee’s Sojhi review report.

For the Dohra, the committee made a conditional (for the time being) recommendation of maintaining “Guru Granth Ji Maneo” as per existing tradition.  Also, it is recommended that Sojhi should sought the input of all stakeholders on such matters of historical importance.

The committee recommended that the Ardaas be changed to match with the Sikh Rehat Maryada while stating that it was not logically wrong for Sojhi to remove Nankana Sahib from the Ardaas.

The committee retained the reference to Guru Granth Sahib as a book clearly showing that they do not believe in the LIVING GURU concept.

The committee did not however address two very important issues i.e. changing the prescribed Gurmantar and selective rejection of Akaal Takhat Hukumnamas.  This means these concerns still remain in the Sojhi syllabus.

This committee set is not independent; the whole review appears to be more a whitewash than a serious review.

Was the review a joke?