I read the comments by Amarjit Singh regarding a post by Gurvichar about Ranjit Dhandrianwala and a number security related comments on Facebook.  See GV FB post included at the end of this article.  Amarjit’s comments are shown in Figure 1.

I was amazed at the content of Amarjit’s comments and prepared a response which is shown below.

The comments show how, those who claim to “ALLEGIANCE … TO MY GURU” implying that they are committed to our Gurus teachings, implying they are Gursikhs, are misled and influenced by Anti-Sikhi and Anti-Gurmat preachers.

Guru teachings are the teachings of our 10 Gurus, Guru Nanak Dev Ji to Guru Gobind Singh Ji, 11th Sri Guru, Guru Granth Sahib, plus the 3 Sikh Cannons (Dasam Granth by Guru Gobind Singh Ji is the second Sikh canon, Composition by Bhai Gurdas and compositions by Bhai Nand Lal, the third and fourth Sikh canons) and long-standing Sikh Tenets and Practices.  Note that Guru Arjan Dev Ji canonised the works of Bhai Gurdas (stating them to be “the key to Guru Granth Sahib) and Guru Gobind Singh Ji canonised the compositions of Bhai Nand Lal.  So anyone who rejects any of these cannons is rejecting the order of our Gurus and can be considered to be both Anti-Sikh and Anti-Gurmat.

This discussion is useful for the Sangat to be aware that even so called GURSIKHS can be mislead by Anti-Sikhi and Anti-Gurmat teachings.

My response is posted below.  My comments are posted in italics.

I read (a) the GV post and (b) your comments

VERY CAREFULLY and wish to respond to your comments/questions as follows.

YOUR QU: What do we not understand re the concept of SANT SIPAHEE!!!

Do you understand what SANT-SIPAHEE!!! means?  Please explain.

I doubt you do.  Please read up on the concept before you open your mouth and make lacklustre statements.

It appears from your comments you think SANT-SIPAHEE!!! means carrying guns around in public places.  What can a person carrying a gun in a Darbar Sahib be, other than a threat to the Sangat attending the program, that is SUPPOSED to be SIKHI parchar.  Further would not such a stance be calling for trouble.

YOUR QU: If it was me that wad shot at n have a close mate take a bullet for me. … i wld be armed to the teeth….

What is your take on the bullet incident?  Was that a DHARAM YUD for you to term it a SANT-SIPAHEE!!! act.

This comment of yours further substantiates that you do not understand the SANT-SIPAHEE!!! concept.

The Saint-Soldier concept stipulates that arms be taken for RIGHTEOUSNESS (not linked to KAM, KRODA, LON, MOH, HANGKAR) or DHARAM YUD.  Therefore any Tom, Dick and Harry running around with arms for any other reason cannot be classed as SAINT-SOLDIER.

YOUR QU: so pks find fault with that …. next u fellas will start connenting of his choices of coloured dastaars….whats next…????

Please stop DREAMING up what is going to be written next? Please state FACTS.

From your comments it appears you have not read and understood properly the contents of the GV POST.  You just went into a SPIN by looking at the PICTURES and DREAMT up your SKEWED understanding of the post and then SPEWED the contents of your thought.

AND please provide EVIDENCE that this has been done on prior posts by GV.

It is not uncommon to see people make up stories without any substantiation based on BLIND EMOTION.

YOUR QU: Is there any issues in his parchaar????? N I do not mean the 30secs snippets of his hour long parchar that many take out of context to discredit him…

First I will address your ’30secs snippets’ issue.

I am not sure if you ever studied a language e.g. English or even Punjabi for that matter.  Very early in the secondary school one is taught to write a SUMMARY (it is called ਸੰਖੇਪ sangkhep in Punjabi).

A SUMMARY is what you call the so called “30secs snippets”.  This teaching of writing SUMMARY has been going on for hundreds of years and is still going on.  Even in Gurbani there is a key message which is further clarified/expounded in the associated parts.  That key message is the SUMMARY or as you term “30secs snippets”.

By reading the SUMMARY one gets the main idea of the message.  SO DON’T COME AROUND, SHOWING YOUR IGNORANCE, IMPLYING A SUMMARY IS PROVIDING FALSE INFORMATION.

ON THE CONTRARY THE SUMMARY GIVES THE PICTURE OF THE MESSAGE in a NUTSHELL so to speak.

Next I will address the TYPE OF PARCHAR HE DOES.  Again I just provide summaries of a few (I apologise if you don’t understand summaries in which case I suggest you go to Youtube and look up his recent more than hour long videos and understand what he is preaching – because your question suggests you are shooting in the dark and ignorant of his stand of late).

HAVE YOU GOT YOUR HEAD BURIED IN THE SAND THAT YOU ARE NOT AWARE OF THIS; ESPECIALLY SINCE YOU CLAIM YOU OWE ALLEGIANCE TO YOUR GURU.  THEN AGAIN IT DEPENDS ON WHICH GURU?

Based on your comments I wonder which Guru you owe allegiance to.  Is is Guru Kala Afghana or Guru Ragi Darshu or the missionary Gurus (who are going around preaching similar falsehood as your revered DHANDRIANWALA).

This, “30 second snippets being taken out of context” is very common excuse given by many to defend their choice or position.

Notwithstanding extraction of key message, the snippets are the very words of the person who is making the statement.  It is foolhardy, in fact bordering on stupidity, to claim that the speaker is being taken out of context.

ALSO notice that a SO CALLED GURSKIH has been blinded to an extend that the ANTI-SIKHI and ANTI-GURMAT views of the preacher (the dot points above) ARE COMPLETELY IGNORED by the SO CALLED GURSIKH.

This is a very common occurrence and many a SO CALLED GURSIKHS are unable to detect the RUBBISH they are being fed.

YOUR QU: pls note that i do not owe allegiance to anyone nor to any group but only to my Guru……

As I stated above I wonder WHICH GURU you owe ALLEGIANCE TO?

If it was the Sikh Gurus (11 Gurus, Guru Nanak to Guru Gobind Singh and Sri Guru Granth Sahib and the other three Sikh Canons plus all Sikh Practices and Tenets) who brought Sikhi to us; you would be up in ARMS against such people who preach against “ALL that” our GURUS brought to us.

YOUR QU: n i do not get excited n start jumping up n down when i hear “chinese whispers”…..

RESPONSE: On the contrary, you appear to be HIGHLY EXCITED WITH YOUR COMMENTS and are JUMPING UP AND DOWN HEAD OVER HEELS claiming the POST IS MERELY “CHINESE WHISPERS”.

Please list the “CHINESE WHISPERS” you claim are in the posts at GV.

It is not uncommon to see people make up stories without any substantiation based on BLIND EMOTION.

YOUR QU: i have heard of issues that concerns MSGC ….

Can you explain what MSGC is?

YOUR QU: but pls explain why the design of this poster has got Bhai Ranjit Singh Dhadriawalle photos of being ” armed” ….what are u truthfully trying to acheive …..

Have you read the comments by others that were included in the GV post.

… ready to participate in jeobala …

… detractors may be there to disrupt …

This is the thought process of those who are bringing this ANTI-SIKHI ANTI-GURMAT preacher into the country.

GV only linked the above COMMENTS with the PICTURES of DHANDRIANWALA with armed personnel around him.  This is presenting the facts to the Sangat.

These COMMENTS and associated PICTURES are setting a worrying scenario for the program.

Can you kindly point out any other preachers who go around with armed personnel and their associates using such worrisome language as above.

It is up to the learned Sangat who can make their Judgement based on presented facts.

WHY ARE YOU JUMPING UP AND DOWN GETTING EXCITED ABOUT THIS.

NOTE THAT NONE OF WHAT YOU STATED ABOVE STANDS THE CHECK OF FACTUAL VALIDITY as far as Sikhi and Gurmat is concerned.

Note that Amarjit did not respond in any learned manner to the above.  Instead of reading the content of my response and clariying his statements and responding to questions posed, he reverted with CHILDISH comments as shown in Figure 2.  My response accordingly is also included in this Figure.

Figure 2: Further comments by Amarjit Singh and my response accordingly 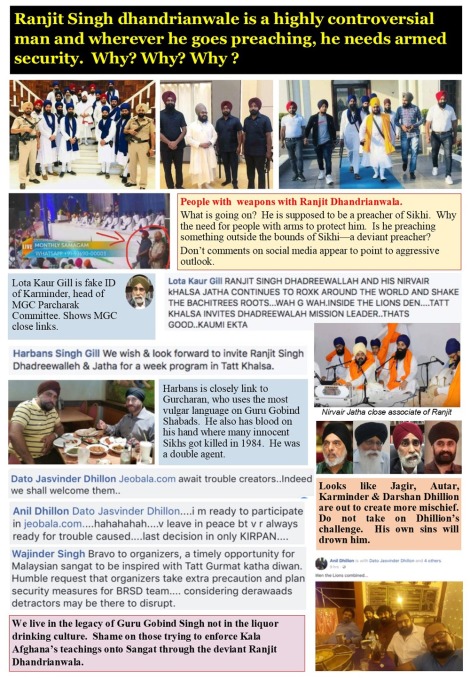