Now, new developments are taking place and we are in a position to reveal our latest scenario from our many years of research into this ANTI-SIKH Kala Afghana Brigade.

The Kala Afghana Brigade members Karminder and MGC (Malaysia Gurdwaras Council) of Malaysia are part of the KEY players in the Australasia region.

We will reveal their Anti-Sikh GAMEPLAN or STRATEGY in THREE parts. The first two parts lay down the groundwork and the third part will reveal the overseas (to Malaysia) link which is intended to POISON the Sangat in Australia against the long-term SIKH PRINCIPLES, TENETS AND PRACTICES from our Gurus times.

In the first part we will outline what the Kala Afghana Brigade is all about.

In the second part we will reveal the development of Kala Afghana Brigade in Malaysia as an important precursor to what will be the likely scenario in Australia and possibly New Zealand.

In the third part we reveal what is going to happen in Australia and possibly New Zealand based on developments and reveal some of those involved.

It is very important that the Sangat, especially in Australasia read the first two parts and the links therein. This will assist in appreciating the third part.

The History of Kala Afghana Brigade

The Indian Army attack on Harmandar Sahib Amritsar was the impetus that led to the Kala Afghana Brigade.

Going back in history, the Sikh Panth was diverse, all abiding by the teachings in the SGGS Ji and Dasam Granth with reference to compositions of Bhai Gurdas and Bhai Nand Lal plus other reference and historical records and documents.

The scene changed after 1984 resulting in promoting “Sikh Nationalism” in North America. The main impetus to this was the attack on Harmandar Sahib. The other main factor was the Sant Deras that proliferated many countries around the world. Some Sikhs, who had been taken advantage of by some of the unscrupulous Deras (though by and large most Deras were genuine), became disenchanted with the Deras. 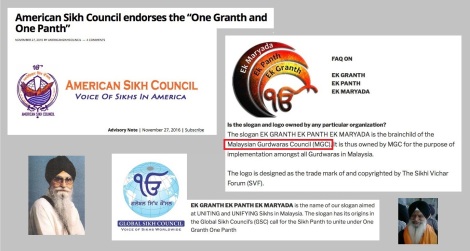 This led to the rise and support for Kala Afghana who is attributed to have written 10 books Bipran Ki Reet outlining what we shall term the Kala Afghana Ideology. Apparently Kala Afghana, who is claimed did not have the capacity to write such material, was supported by Anti-Sikh elements in the preparation of this Ideology.

See Gur Vichar article LINK A for a detailed analysis.

The Kala Afghana Ideology is intent on the removal of Sikhi tenets and practices as well as reinterpreting (actually misinterpreting) Gurbani that does not meet its ideology. Sikhi is to be sanitised of any Vedic/Sanatan influence/references as well as anything that falls out of logical reason and not supported by Scientific rigour. Remember the Kala Afghana ideology does not have any historical basis or supporting records except for the 10 Kala Afghana books. Only ‘logic, reason and critical thinking’ is the basis for their interpretation of Gurbani tenets and practices. It is believed that Kala Afghana was supported by Anti-Sikh elements in preparation of this Ideology. Let us see briefly what the Kala Afghana Ideology is about.

Some salient points of this ANTI SIKHI ANTI GURMAT ideology are

Through the Kala Afghana Ideology, Sikhi will be sanitised of Vedic/Sanatan references. This will involve decimation of Dasam Granth, compositions of Bhai Gurdas and Bhai Nand Lal plus other reference and historical records and documents which have any reference to Vedic/Sanatan thoughts and does not meet with the Kala Afghana Ideology. It is expected that Guru Granth Sahib will be reinterpret or revised to exclude any Vedic/Sanatan references resulting in a watered-down version of Granth Sahib which will be the Ek Granth. Also necessary is sanitisation of all those who resist by various means. All this will commence once the critical mass supporting this ideology is reached. The Sikh Rehat Maryada will be changed to meet with the Kala Afghana Ideology. Ek Maryada and Ek Panth will automatically follow.

See Gur Vichar article LINK B for a detailed analysis.