Dear Jagir, as promised I shall continue to expose the fake-tual letter that you wrote dated 27 April 2017. To those members of the sangat who have not yet read Part 1 of the corresponding response please click here.

4. Jagir, Your Next Statement as Follows is Referred.

However, it is obvious that reference is being made to“gurmqw-1“ (Gurmatta-1) issued by Sri Akal Takht Sahib dated 6-6-2008.

The relevant part of the Gurmatta says :

[ Translation:”Those rachnava (does not even says Bani, let alone Gurbani) from Dasam Granth (DG) that Panth has accepted and included in the Sikh Rehat Maryada, Nitnem and Amrit Sanchar, no one has the right to create any issue about them.” ]

Thus, where is it stated in the Gurmatta that Kirtan and Katha of Dasam Pita ‘s Bani is allowed. In Fact Dasam Pita ‘s name is not mentioned at all.

First of all, your translation of the partial statement of the Gurmukhi version is doctored with your own additions of words ‘does not even says Bani, let alone Gurbani’ which is a mark of an unprofessional and malicious person, who is trying to deceive the reader into believing that the rachnavan does not mean Gurbani as per your Manmat.

I append below the proper and professional translation of the same partial gurmata.

“No one has the right to raise arguments against those rachnavan (compositions) in the Dasam Granth that have been accepted by the Sikh Panth in the Sikh Rehet Maryada, Nitnem and Amrit Sanchar.”

I have also added the word composition in the above translation, but my intention of doing so is only to explain the meaning of the word Rachnavan.

Jagir, due to your apparent lack of command of Sikh literature I will spend my precious time that could have been better spent in seva of the panth, to educate your illiterate Mind.

The following is the relevant meaning of rachna from MK.

The relevant meaning in No.3 can be translated as “3. The compositions of a poet”

Rachna means COMPOSITION. Jagir, the Banis in SGGS Ji are compositions of gurus. The entire SGGS Ji is a compilation of RACHNAVAN (COMPOSITIONS) of the Gurus. On the same note the various GURBANI  (as defined in MK, not your manmat definition) in the SDG are also the RACHNAVAN (COMPOSITIONS) of our Dasam Pita Ji  (Sri Guru Gobind Singh Ji), and hence, Datuk Sucha’s preferred usage of the word Dasam Pita Ji’s Bani, which you again maliciously disinformed by saying “Thus where is it stated in the Gurmatta that Kirtan and Katha of Dasam Pita’s Bani is allowed.”

It is clear from the above that the words Bani, Gurbani or Rachna (Rachnavan) used in the SRM is based on MK’s definitions, that point to , “Guru Nanak ate ohna dey roop Satguruan di Bani, Akali Bani, Jo Guru dwara sanu prapat hoyee hai. (‘The Bani, Akali Bani of Guru Nanak and His Satguru Forms, that we obtained through the Guru).

5. Your Following Statement is next referred.

You again choose to mislead the sangat to believe that the remaining Gurbani/Bani/Rachnavan in SDG are not mentioned  in the SRM. Lets us look at SGGS Gurbani/Bani/Rachnavan that are mentioned in the same  Chapter III, Article IV of the SRM from which your above statement is derived. The said Article mentions only Japji Sahib, Sodar Rehras (This includes nine hymns from SGGS Ji, Benti Chaupai from SDG, anand sahib, Mundavni etc), and sohila). The rest of the Rachnavan (compositions) such as Bhagat Bani, Bhat Bani, Sehskriti Saloks and many many more Rachnavan by our Gurus are not mentioned. So Jagir, does that mean the those Rachnavan are excluded? If they are not, then why do you Kala Afghanically (what I mean to say is with a Kala Afghana ideology intention) choose to exclude those in the SDG?

Your above statement also speaks volumes of  your level of understanding of the SRM that you so claim to stand by. Jagir, if the the above three mentioned are the only Banis from SDG, then can you please tell us, from which Akash Lok did the Ardas come from and from which Patal Lok did the Benti Chaupai appear?

Firstly, Your superficial understanding of the SRM is unable to tell you that the Ardas is from Chandi Di Vaar and the Benti Chaupai from Charitr Upkhyan both of which are part of the SDG. Secondly, if the first stanza (ਪਉੜੀ) of Chandi Di Var is accepted in the SRM, then why did you unilaterally issue a Ban on the remaining stanzas of the Bani without any approval from Sri Akal Takhat? The same question applies to the ban imposed on Charitar Upkhyan. The sangat of Malaysia demands answers to the above question from MGC, Khalsa Diwan Malaysia, Gurdwara Tatt Khalsa Diwan and Sant Sohan Singh Ji Melaka Memorial Society who you claim to have been part of a meeting that approved the ban.

Jagir, you quoted a fake resolution “Resolution No.36672 was passed by Shiromani Gurdwara Parbandhak Committee (SGPC)…..” to claim that Charitar Upkhyan is not written by Sri Guru Gobind Singh Ji. However you have not shown us the original signed copies copies of the resolution on the letter head of SGPC to prove the truth of your statement. All you have done is reproduced an unsigned dubious copy of a statement typed on a blank piece of paper. It looks like you are trying to use this document to your advantage without regard to it’s authenticity, just because it suits your Kala Afghana Ideology. Is this how a president of a national level organisation suppose to conduct himself by unethically and mischievously producing doubtful documents to further his agenda? I consider this as a blatant disregard and disrespect to the Gurdwaras and sangat of Malaysia. This is another Mala fide action from you, Jagir.

I can do no better than refer the readers to an article by Dr Anurag Singh Ji on gurvichar.com (click here) which has exposed the lies committed by Global Sikh Council (another Malesh declared organisation of which MGC is a founding member) on the above mentioned resolution.

Jagir, not only have you lied and misinterpreted with the intention to mislead the sangat, but also wasted enough of their panth seva time already. One does not need to be sitting on a ਕੁਰਸੀ (position) to do seva.

6. Next we look at another one of your Kala Afghanic statement.

Jagir, I have proven to you in my part 1 of this post and above that, Gurbani includes the Bani/Rachnavan in SDG. I have also proven that the Ardas and Chaupai Sahib are parts of Chandi Di Var and Charitar Upkhyan which means these banis are accepted and recognised in the SRM although they are not specifically mentioned. Any none Kala Afghana tainted Gursikh clearly understands this. It is only the Kala Afghanas who are hell bent on discrediting Sri Dasam Granth, that are deliberately misconstruing the SRM for their evil purpose.

You say that the Dasam Granth is 0nly recognised as Literature and History and not Gurbani. Let me first educate you that there is also history mentioned in SGGS Ji. There is history of Babur invasion (Raag Tilang, Ang 722).

Bringing the marriage party of sin, Babar has invaded from Kaabul, demanding our land as his wedding gift, O Lalo.

There is history of Ravan, Ram Chander and various Devtas  as well as lives of Bhagats also mentioned in the SGGS Ji. If all of these histories are considered as Gurbani/Bani/Rachnavan and can be sung or preached in the Gurdwaras then why can’t the history in the SDG be done the same with?

The battle raged between the Mugals and the Pat’haans, and the swords clashed on the battlefield.

They took aim and fired their guns, and they attacked with their elephants.   (SGGS Ji Ang 418)

Now, dear Jagir, if weaponry is mentioned in SGGS Ji and accepted as Gurbani, then why is the weaponry mentioned in the SDG not acceptable to you and on what authentic evidential basis do you reject it? Please provide evidence and proof for your rejection, which you have failed to provide until now.

Jagir, do you know of the equivalent word for Literature in Punjabi? It is called swihq. The meaning of the word is given below based on MK.

So Jagir, both the SGGS Ji and the SDG fit into the above definition nicely and accurately.  Both are compilations of poetry that complete in every sense in the above definitions. You however prefer to mislead the sangat with your Kala Afghana Ideology and disunite the Sangat of Malaysia.

Based on the above  analyses, Lets look at the table below

7. Next lets look at another one of your seemingly deliberate attempts to mislead the sangat as below.

It is understood  that this was issued in response  to some Parcharaks who were questioning the Nitnem  Banis, which are already included in the SRM. The Mata only says, if there is any questioning of these Banis, a befitting reply should be given by Scholars.

A translated version of the Mata 2 is given below.

Jagir, may I ask, where in the above mata are Nitnem Banis mentioned? Are you hallucinating or imagining those words or have you again chosen to deliberately misunderstand and assume that the Mata is directed only at Nitnem Banis and not the Dasam Granth Sahib as a whole? Now, this clear cut Mala Fide on your part Jagir.

Let me use my precious time again that could have been better used to do seva of the Panth to educate you. Let’s look at the MK. What is the meaning of Dasam Granth given.

Translation: Dasam Granth – The GRANTH of Dasam Patshah, Sri Guru Gobind Singh Sahib. The brief Katha of this Granth is as Follows:…..

Jagir, I know your Gurmukhi command and understanding of Sikhi scriptures is nothing more than rubbish and  hence I’ve taken the trouble to translate it for you. Can you see the words “THE GRANTH OF DASAM PATSHAH SRI GURU GOBIND SINGH SAHIB” shining on your face with the brilliance of a thousand suns, clearly. The Mata No. 2 mentions “…..misleading parchar pertaining to DASAM GRANTH….”. There is no mention of Nitnem Banis.

Stop wasting everybody’s time Jagir. Especially yours, since you should better spend it doing seva of the panth than dreaming up lame Kala Afghana tactics to discredit Sri Dasam Granth Sahib, my Pitaji’s Bani/Gurbani/Rachnavan.

Jagir have you heard of the phrase “playing with fire”? Well let me share with you these words from Gurbani and mark them.

Some are stuck in falsehood, and false are the rewards they receive.

In love with duality, they waste away their lives in vain.

They drown themselves, and drown their entire family; speaking lies, they eat poison. ||6|| (SGGS Ang 124)

Watch out Jagir! The only way to win this game is to not play it at all. 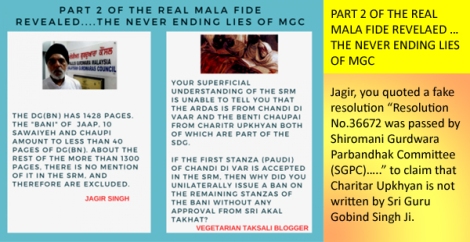