Kavi Sainapati, one of the Anandpur literati, composed his Sri Gur Sobha as an ode to Sri Guru Gobind Singh Ji and the Khalsa. Though concentrating more on the Khalsa’s ideology, Sainapati nevertheless provides some intriguing facts vis-a-vis the Guru’s life and battles. Below is his account of the Guru’s final moments:

After partaking the food, a little bit of water did the Guru take, to have patience and faith did he stress upon the devout. As the time crossed past midnight, with the Divine Lord did the Divine Guru unite.

Dumbfounded did the Singhs feel as they heard, extremely awestruck did they feel at heart. All their fears and apprehensions remained unexpressed, as they did not get an opportunity to share their thoughts.

Swaiyya: Completely befuddled and dumbstruck they remained, as what had happened was completely unexpected. There upon, did all the Singhs assemble together, immediately did they deliberate upon the situation. “Must we cremate the mortal remains of the Divine Guru, at night before the sun rises,” so did they opine. As they performed the last rites as they had decided, so did the Divine Guru’s soul unite with the Divine Lord.’ 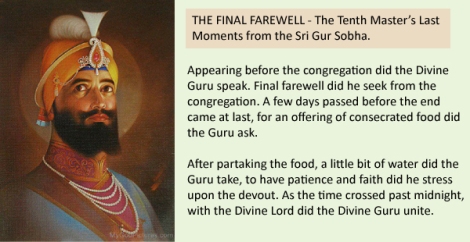