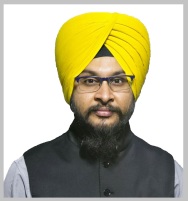 In this video clip Baljeet Delhi ‘pokes fun’ at TWO EVENTS related to our Gurus.  The FIRST is the Sakhi of Guru Nanak Dev Ji and Malik Bhago.  The SECOND is that of Guru Har Krishan and Bhai Chhajju.

The response to Baljeet in the video clip by the gentleman (unknown) is very strong.  We apologise on his behalf.  But Sangat Ji, please understand that his sentiments are very hurt by what Baljeet said about our Gurus.  The sentiment of Gursikhs will definitely be hurt, as the short the video clip below, which further illustrates his thinking and language about those who are repetitively performing VAHEGURU SIMRAN, shows (the full video can be viewed at LINK A).

How can anyone forgive such response and language, that too in the Darbar Sahib in the presence of SGGS Ji which is the source of this Shabad, to a group sincerely with Sharda performing VAHEGURU SIMRAN, no matter how many apologies or excuses one gives.  VAHEGURU is the word of GOD that our Guru Ji has blessed us with.  He has degraded this Shabad VAHEGURU to the lowest of low.

Does he have any faith in the SHABAD GURU and SGGS Ji?

Can anyone BELIEVE that HE IS SPEAKING THE TRUTH when he says “I ONLY BELIEVE IN GURU GRANTH”; these words are abundantly found all over in his talks?

One very important point that the gentleman, in the video, brought up is that ‘what these miscreants are doing is worse than the enemies, like Zakria Khan, of the Sikh Panth’.  These enemies can only terminate the body of a Sikh.  Many more Sikhs will arise to defend Sikhi.  But we have only one HISTORY and if this is finished, SIKHI IS FINISHED.

PLEASE LISTEN TO THIS VIDEO CAREFULLY with DEEP REFLECTION.

This event from, a credible recourse, The Encyclopaedia of Sikhism Ed. Harbans Singh, Patiala Uni, 1992 is described as follows:

BHAGO, MALIK, was, according to Sikh chroniclers, the Hindu steward of the Muslim chief of Saidpur, present day town of Eminabad, now in Gujranwala district of Pakistan, during the days of Guru Nanak.  The tradition relates that once while Guru Nanak was staying with Bhai Lalo, a poor carpenter, in the town, Malik Bhago gave a feast to which Guru Nanak, along with other holy men and dignitaries, was invited.  As the Guru declined the invitation, the Malik had him summoned to his presence and asked the reason for his refusal.

Guru Nanak took into one hand a quantity of Malik Bhago`s rich food and in the other a piece of Lalo`s coarse bread. He then squeezed both. From Lalo’s bread trickled milk, and from Malik Bhago’s blood. The moral was clear. The rich man’s wealth had been selfishly amassed at the cost of others and his charities were thus tainted, whereas Bhai Lalo’s simple bread earned by honest labour was holy.

Now what does Baljeet Dehli say about this event:

Guru Nanak held the roti bread of Bhai Lalo in one hand and that of Malik Bhago in the other.   Customarily what happened is, when he squeezed the breads, blood dripped from one and milk from this other.

If you relate this to your children, they will not believe this.  Baljeet Delhi says this should not be believed because by squeezing the bread, blood or milk is not expected to drip from the bread.  Bani does not believe in karamat mircles he says.

Now, instead of poking fun at the event, a learned person in Gurbani would explain the message behind the event i.e. ONE MUST EARN AN HONEST LIVING, like has been explained in the Encyclopaedia.

What is he trying to do? Discredit our Guru by saying that our Guru is an ordinary person like him?  Is he deliberately trying to insinuate that our Guru did not do this and that historical records are false?  Does he really believe in Guru Ji?

Baljeet is trying to change historical records by his actions.  Does this not amount to TREASON to the Sikh Panth?

This clearly displays the CALIBRE of this miscreant.  What is he up to?

WOULD YOU LET YOUR CHILDREN near a person of such MISLEADING PREACHING?

The extract of this event from, The Encyclopaedia of Sikhism Ed. Harbans Singh, Patiala Uni, 1992 is described as follows:

The Emperor summoned the young Guru to Delhi through Raja Jai Singh of Amber.  Accompanied by his grandmother, Mata Bassi, and his mother, Mala Sulakkhani, Guru Har Krishan left for Delhi.  He travelled through Ropar, Banur, Rajpura and Ambala. Along the way, he instructed the disciples who came to call on him.

As he neared Panjokhra, a village 10 km northeast of Ambala, a Sikh spoke with humility, “Sangats are coming from Peshawar, Kabul and Kashmir.  Stay here a day so that they may have the chance of seeing you, Master”.  The Guru made a halt in the village of Panjokhra.

In that village lived a learned Pandit, Lal Chand by name, who came to see the Guru and spoke with derision: “It is said that you sit on the gaddi of Guru Nanak.

But what do you know of the old religious texts?” 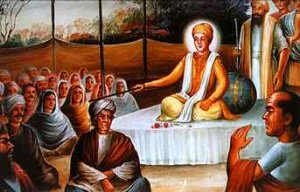 Chhajju Ram, the illiterate, dark skinned village water supplier, happened to pass by at that moment.  Guru Har Krishan asked Dargah Mall to call him.  As Chhajju Ram came, the Guru enquired if he would explain to the Pandit the gist of the Bhagavad gita.  The illiterate villager, says Bhai Santokh Singh, Sri Gur Pratap Suraj Granth, astonished everyone by his lucid commentary on the sacred book.  Lal Chand’s pride was overcome.  Both he and Chhajju Ram became the Guru’s disciples and travelled with him up to Kurukshetra.

What does this miscreant say about this event:

Guru Har Krishan Sahib said “If I were to explain then you may have reservations that I have heard this from the many learned people who visit this darbar.  You go and get anyone and I will get that person to provide the explanation”.  The pandit brought Bhai Chhajju.  Guru Ji put a stick on the head of Bhai Chhajju, who was deaf and dumb as well as illiterate, was able to explain the Sloks in the Gita.  “This is what we have been told” Baljeet says.

He then start to make fun of Guru Ji using the stick in this event from 1 min 55 sec to 6 min 05 sec (a total of 4 min 10 sec) mainly focussing on the “stick”.  In the process he poked fun referring to Guru Nanak, Guru Angad, Guru Teg Bahadur, Guru Gobind Singh, Guru Granth Sahib in particular and our Gurus in general.

Repeating a “valueless statement for a total of 4 min 10 seconds is a HALLMARK OF IGNORANCE.

I repeat. What is he trying to do? Discredit our Guru by saying that our Guru is an ordinary person like him?  Is he deliberately trying to insinuate that our Guru did not do this and that historical records are false?  Does he really believe in Guru Ji?

I repeat that this is not the way of a learned person who wants to convey the message of Gurbani.  The key is to relay the message from the Sakhi i.e. NO MATTER HOW HIGH ONE REACHES ONE MUST NOT BE EGOISTIC BUT MAINTAIN HUMILITY.

Again Baljeet is trying to change historical records by his actions.  Does this not amount to TREASON in the Sikh Panth?

Once again this clearly displays the CALIBRE of this miscreant.  What is he up to?

WOULD YOU LET YOUR CHILDREN near a person of such MISLEADING PREACHING?

ABOUT MIRACLES IN RELATION TO OUR GURUS

We have discussed this matter about miracles at LINK B.

An extract below may be useful information.

Just because our Gurus did not generally subscribe to performing miracles (though there is indication that inexplicable events did occur) does not mean miracles cannot occur. Yes, of course if one uses SCIENTIFIC REASON/LOGIC and CRITICAL THINKING, then they definitely cannot occur.

Though our Gurus did not generally subscribe to performing miracles, there is indication that inexplicable events did occur. We should not question the inexplicable actions or inexplicable known events experienced by our Gurus or Great Martyrs who were spiritually elevated souls. We are not in a position to SCIENTIFICALLY or LOGICALLY REASON or using CRITICAL THINKING rationalise what happened. Miracles do and will occur, if we believe in God.

Let us face it; THE CREATION OF THE WORLD is ONE BIG MIRACLE.

Therefore SCIENCE, REASON AND/OR LOGIC OR CRITICAL THINKING has a place but we must know its limits.

Therefore God’s intervention did and can occur in events and miracles and WE ARE NOT IN A POSITION TO UNDERSTAND THIS USING SCIENCE, REASON AND/OR LOGIC AND/OR CRITICAL THINKING.

We can hence conclude that the events listed as the observations above can occur (Note: in the article at LINK B  a number of inexplicable events are listed).  In our case this depends on how much SHARDA or FAITH we have in our Gurus teachings.

Relying totally on LOGIC, REASON AND CRITICAL THINKING, these miscreants are BLIND to faith.  This reminds me of what Rabindernath Tagore stated:

The man, whose acquaintance with the world does not lead him deeper than science leads him, will never understand what it is that the man with the spiritual vision finds in these natural phenomena. The water does not merely cleanse his limbs, but it purifies his heart; for it touches his soul. The earth does not merely hold his body, but it gladdens his mind; for its contact is more than a physical contact – it is a living presence. (source: Sadhana: The Realization of Life – Rabindranath Tagore).

Discrediting Guru Ji; these miscreants are those who do not believe in Guru Ji.  What the miscreants are preaching is the way of the ATHEISTS or DEISTS (ਸਾਕਤ). ATHEISM and DEISM is rejected in the strongest of terms by our Gurus.

Those who have not met the Guru, the True Guru, are foolish and insane – they are faithless cynics. Those who were pre-ordained to have no good karma at all – gazing into the lamp of emotional attachment, they are burnt, like moths in a flame. ||3||

These miscreant missionaries have been and are creating controversies (see Figure 3).  What will they do next?  Where do they stop?  ‘TEAR APART’ THE TEACHINGS OF OUR GURUS’.

BEWARE OF THE MISSIONARIES, THEY ARE OUT TO SINK SIKHI.

NOTE: THIS MISCREANT WITH ANOTHER TWO MISSIONARIES IS HAVING PROGRAMS IN MALAYSIA.  SEE BELOW.

Figure 3: What the Kala Afghana/Ragi Darshan ideologists (ADNs) believe in 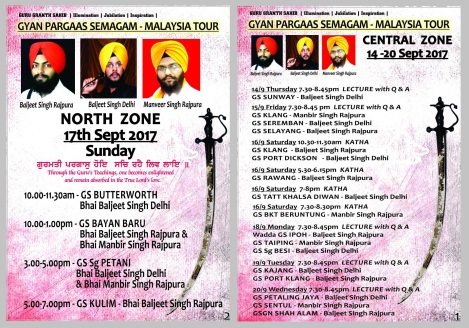 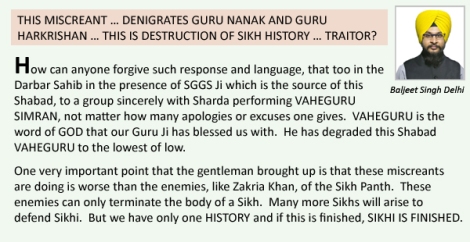