There is a letter dated 19th May 2018 by MGC informing about the Seminar for Granthis by MGC.  This letter is attached as a PDF file.

It is not indicated who is going to conduct the Seminar.  Therefore, it is assumed that the Head Parcharak of MGC KARMINDER will be conducting the seminar.  Also the president of MGC JAGIR and other unknown people will also be involved.

Actually MGC teaching about SRM is a BIG JOKE.  Why? Let us see the record of these people.  Some of their ideology is shown in the table

These people have rejected many parts of the SRM.  WHAT MAKES THEM QUALIFIED TO PREACH the SRM to ANYBODY?

These people follow the Kala Afghana / Ragi Darshan Ideology.  They are HAND IN GLOVE with the Global Sikh Council which is declared PANTH DOKHI by the Akaal Takhat.

The want to propagate the COPYRIGHTED Ek Granth.

They have been bringing ANTI-SIKH ANTI-GURMAT preachers, who also follow the Kala Afghana / Ragi Darshan Ideology, AND who have been REJECTED in many countries.  This TREND of rejecting them is increasing.

They are out to POISON the GRANTHIS with their ANTI-SIKH ANTI-GURMAT IDEOLOGY.

Beware the Sangat who are the RIGHTFUL OWNERS of the Gurdwaras.  DON’T LET THESE MOORAKHS get their way.

Ensure that YOUR GURDWARA DOES NOT SUPPORT THIS SEMINAR and the people involved. 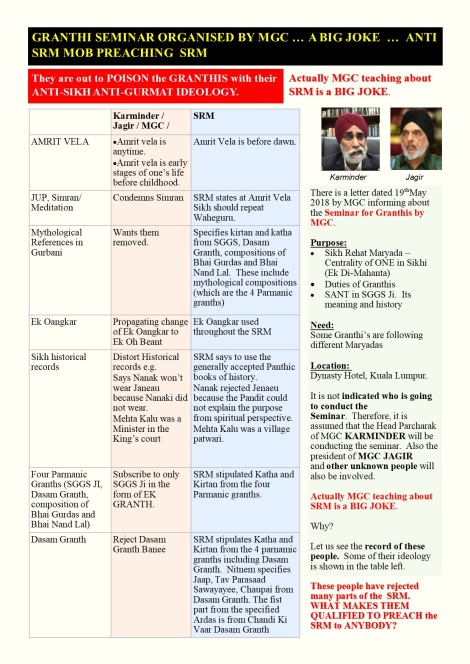