SOME INFORMATION ABOUT THE SHABAD:  One version of information of the above Shabad (Note that there are other versions of this).  The Dohra was part of Guru Gobind Singh’s last sermon. Now part of the daily Ardaas,

its inclusion is based on the rahitnama of Bhai Nand Lal, an eye witness to the sermon in which Guru Gobind Singh affirmed

This account is recorded in notes of the court poet Sainapat, Bhai Nand Lal and Dhadi Nath Mal.
(source sikhphilisophy.net)

I had an interesting discussion with a reader which I thought  worth a share with the Sangat (some changes made to easy readability and correct errors).
Here it comes ….

This is the crucial time for all Sikhs to stay united as external influences are attempting to destroy the Sikh Rehat Maryada which has been followed by all Sikhs for umpteen years.

You are very correct. It has been 5 banees for morning NITNEM since a long time. First changing to 3, then it will be slowly ONE is definitely the process of decimating the SRM.

Harnaak Singh Ji, no way are the 5 banis of Guruji going to become 3. We have a strong mandate for our Sikh Maryada to be followed and will follow it until our last breath.  Stick strictly to GURU MANEO GRANTH and you will get all your blessings from GURUJI

Your comment implies that you are an ardent subscriber to the SRM.  Looking at your facebook postings you seem to subscribe to the Ek Granth Ek Panth Ek Maryada.

With this background let’s analyse if your above statements are realistic and from the heart or mere baseless talk.

UNITY
Your concept of unity is pinned on Unity in Singularity (Ek-Ek-Ek-..).  Is this a feasible reality?

[Note: Singularity means “the state of being single”.  In our context it means that we have to follow ONLY ONE WAY decided by someone.]

Consider a family.  Each member of the family is different, though there are also many similarities.  So the FAMILY IS A DIVERSE UNIT OF MEMBERS.

GOD made the creation full of diversity.

There has to be ‘give and take in a family’ for the FAMILY UNIT to be successful – there must be this concept of AGREE TO DISAGREE.  Essentially a successful family unit is A DIVERSITY IN UNITY albeit with a basic common base (which is made up of the similarities).

That FAMILY UNIT WHICH DOES NOT ACCEPT DIVERSITY eventually ends up breaking.  This is because ONE MEMBER HAS TO FORCE THEIR CONCEPT DOWN THE THROAT OF THE OTHER MEMBERS.  THIS IS THE STARK REALITY.

TAKE AN IN DEPTH ANAYSIS OF THOSE AROUND YOU AND YOU WILL REALISE THIS.  It are those from broken family units that profess UNITY IN SINGULARITY.

The same applies at Panth level, the basis of “United we stand, divided we fall” is the concept of UNITY IN DIVERSITY. It is ONLY through UNITY IN DIVERSITY will the Panth become united. As in the case of the family unit, the Ek.. Ek.. Ek.. concept is a UNITY IS SINGULARITY concept. With this concept the UNITY OF THE PANTH IS DOOMED TO FAILURE.

Force only works as long as the downtrodden accepts it.  Guru Gobind Singh Ji showed this to the Mughals.  The MUGHAL EMPIRE eventually failed due to this.

[Note: The Mughals wanted to force convert everybody to embrace the Muslim Faith.  This is akin to UNITY IN SINGULARITY.]

Please refer the following to get an understanding of UNITY IN DIVERSITY.

THE SRM
Just like the discussion above, the Akal Takhat SRM is the BASIC COMMON BASE of similarities. As long as one keeps to this common base and accepts the differences the others choose to follow, there will be UNITY.

To profess SRM one must follow SRM.  Professing that others should follow or even suggest SRM as a solution to any issue, one must be experienced in abiding by the edicts of the SRM.  OTHERWISE IT IS JUST EMPTY TALK.  Do you FOLLOW THE TENETS OF SRM.  ONLY YOU KNOW.  For a start look into the mirror and make a detailed analysis of yourself.  Don’t preach what you do not follow!

For information on SRM see the following.

Ji all I wish to say is “I’m a true Sikh following the Sikh Rehet Maryada by only accepting GURU GRANTH SAHIB JI AS MY TRUE LIVING GURU.  No way am I for one going to bring down my 5 banis to only 3 banis.

Very Good no problems with that. This is exactly why I say UNITY IN DIVERSITY. Nobody should force upon you to read 7 Nitnem Banees. Your recite 5, others recite 7 according to SRM, no issues.

Everybody is doing their best for their own spiritual upliftment.

It is wrong to go around PROFESSING and FORCING OTHERS TO FOLLOW be they in the position of power or not. THIS IS THE CAUSE OF DISUNITY.

Good on you but note that SRM stipulates 7 Nitnem (daily) Banees NOT 5. This is spelt out in the article.

Ok I do my 5 banis without fail and that’s it.  I have been doing them and will continue doing them till my last breath with Waheguru Ji’s blessing.  Thank you Ji

This discussion is very interesting.  Some points of value are listed below.

SRM
There are many  who are not aware of edicts of the SRM.  Note that many may think that SRM is an SGPC Maryada.  IT IS NOT.  SRM is an Akaal Takhat Maryada.  This is being preyed on by those who want to mislead with their own agenda

SGPC is responsible for the management of the Gurdwaras in Punjab, Haryana, Himachal and Chandigarh. It also administers Harmandir Sahib Amritsar.  The SGPC is governed by the Chief Minister of Punjab.

So essentially it plays an administrative role.

SGPC IS NOT A RELIGIOUS BODY.  The FIVE TAKHATS are the authority for Sikhism and Sikh Panth.   This is clearly and explicitly stated in the SRM terming the TAKHAT as the Seats of Authority (see extract below). 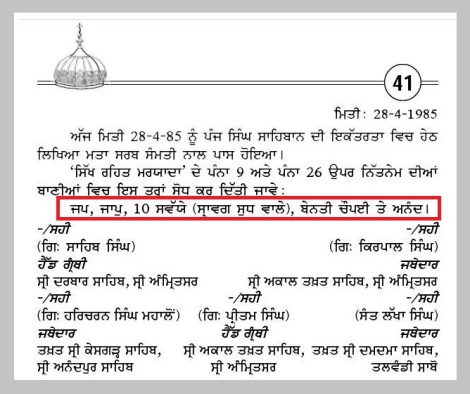 UNITY IN DIVERSITY
It is shown using an example the the Ek-Ek-Ek concept espouses UNITY IN SINGULARITY will create disunity and is doomed to failure of the Sikh Panth.

With the SRM as a common base UNITY in DIVERSITY will lead to Panth Unity. 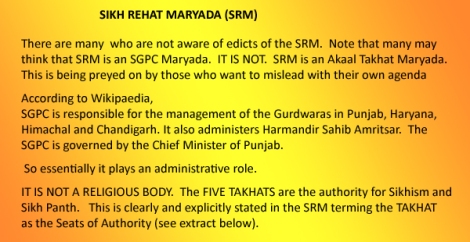